THESE WERE THE MOST EXPENSIVE ARTWORKS SOLD IN 2020

In a year of change heavily impacted by COVID-19, the art market has had to adapt to a new normal. The traditional big sessions of May and November in London and New York were replaced by a series of digital events and hybrid spectacles mixing live and virtual, with global live-streamed sales. The digital revolution combined with the boom in private sales helped stem more severe declines in turnover at auctions; still, both Christie’s and Sotheby’s reported drops of 27% in auction sales this year.

This was the first year since 2016 that no lots topped the $100 million mark. The highest prices were conspicuously lower than in previous years. But we also witnessed a watershed moment in the development of the online art market, which was a direct repercussion of COVID-19 restrictions that made physical gatherings impossible and accelerated virtual transformations already underway. Digital auction platforms have proven to be the most popular, which explains the jump in online-only art sales at Sotheby’s, Christie’s, and Phillips between January and August this year, where online sales rose to $596.7 million from $168.2 million for all of 2019. 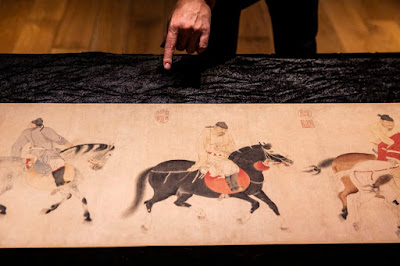 There has been a surge in online bidding and confidence in transacting at high levels—as trust in technology has grown, driven by necessity—and a broadening demographic of buyers under the age of 40 as well as a rise in new art collectors. Sotheby’s online auctions achieved $437 million from January to November 2020, putting it on track for growth of 500% over the previous year. Compared to 2019, the number of new buyers in Christie’s online sales increased by 89%, and first-time online buyers were up 228% year on year. In 2020, Phillips hosted 29 online-only sales, up from 11 in 2019.

Below are the 10 works that commanded the highest prices at public auctions this year. As in 2019, it’s an all-male lineup, with Mark Rothko, Francis Bacon, and David Hockney making repeat appearances. Rather than consisting solely of Western artists, Asia is gaining ground with three Chinese artists making the cut in 2020. Their paintings were auctioned by the Hong Kong outpost of Sotheby’s, market leader in Asia for the fifth consecutive year, which saw significant Asian contribution in its sales worldwide, as well as Beijing Poly Auction, China’s largest state-owned auction house. 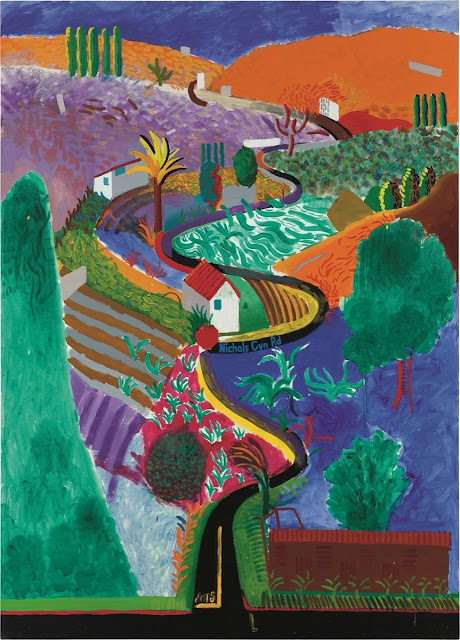 Driving and roads have played a major role in David Hockney’s images throughout his career. Named after the long winding street in the Hollywood Hills that he often took into Los Angeles, and painted just after he moved to the area, the iconic Nichols Canyon is also a portrayal of his short commute to work, as his studio was situated below on Santa Monica Boulevard. There are Matisse-like reds, greens, yellows, and blues, and depictions of the area’s lush vegetation. Hockney is fascinated by the experience of traveling through a landscape. He suggested that the viewer’s eye moves “around the painting at about the same speed as a car drives along the road.” Shunning straight lines, he fell in love with the curving thoroughfares of the Hollywood Hills he drove along, which started to enter his works—the wiggly line drawn freely down the middle of the canvas marked the start of this painting.

Boasting rare provenance for such a high-caliber piece, Nichols Canyon—along with another of Hockney’s paintings from 1980, The Conversation—was acquired by André Emmerich, one of New York’s most influential art dealers, in exchange for a late Picasso with which Hockney was enamored. An American collector then bought the work from Emmerich in 1982, and it had not changed hands since. At this Phillips evening sale—which achieved the highest total for a New York auction in the company’s history and marked a nearly 25% increase over last fall’s sale of 20th-century and contemporary art—Nichols Canyon made its auction debut and set a record for a landscape by the artist, atypically rivaling the prices fetched by his iconic portraits.