FROM IAN FLEMING, WITH LOVE: UNCOVERING SOME OF JAMES BOND’S MOST ENIGMATIC CHARACTERS

When Ian Fleming sat down to write his first spy serial, he wanted to give his protagonist what he described as ‘the simplest, dullest, plainest-sounding name’ he could find. He was at his Goldeneye estate in Jamaica, a secluded and sprawling compound where, when not writing, his preferred leisure was birdwatching — a term that in British intelligence slang also means ‘spying’. 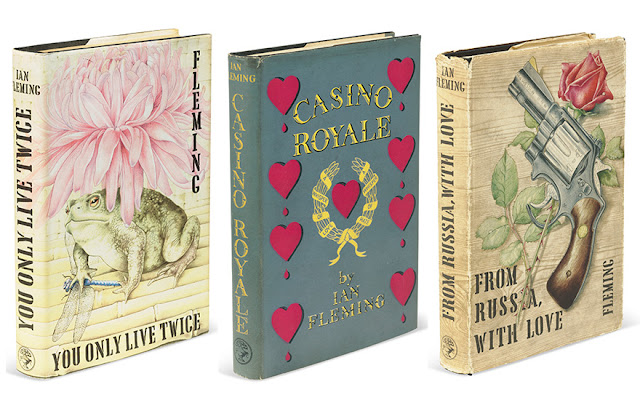 One afternoon, with the breeze gently blowing through the jalousie windows, Fleming’s eyes wandered about the room in search of inspiration. Landing on a reference book, Birds of the West Indies, he happened to notice that the author was none other than the ornithologist James Bond.

‘It struck me that this brief, unromantic, Anglo-Saxon and yet very masculine name was just what I needed,’ he said. James Bond kept the thoughts of his character concealed, allowing this cool and calculating persona to be built through action. In one fortuitous moment, the birdwatcher was revealed as the first-rate spy.

Experts debate whether Bond’s character was wholly fictional, since Fleming’s inspiration often came from the people with whom he worked, or events that occurred during his military service. They are usually named with a subtle nod to their real-life counterparts, and on rare occasions he would present an inscribed edition of one of his books to them. On 11 April at Christie’s, Fine Printed Books and Manuscripts including Americana online sale will feature three of these highly prized volumes, as well as other rare selections from Fleming’s opus.

‘The fact that Fleming was so inspired by characters that he knew personally lends the novels a sense of realism and intimacy,’ says Mark Wiltshire, specialist in Books and Manuscripts at Christie’s. ‘His experiences during the war form the basis of the historical grounding of the novels, but he also undertook serious research and sought the advice of informed correspondents.’

A first edition copy of Casino Royale is inscribed ‘To M.’, an allusion to the enigmatic head of the British Secret Services during the 1940s and 50s. Fleming’s first novel features M. prominently, as he gives Bond the assignment to bankrupt a Soviet agent in a high-stakes game of baccarat.

Experts suggest this was based on an experience Fleming had with Admiral John Godfrey — his superior during their time together in the Naval Intelligence Division — at the Estoril Casino in Portugal. A possible inspiration for M., Godfrey was a decorated officer whose wartime memoirs are also included as part of this sale.

By the time Fleming’s fourth novel, From Russia, with Love, came to print in 1957, his series had already achieved widespread fame in the eyes of the English-speaking public. It centres around a plot by Soviet counterintelligence to assassinate Bond through a honeytrap: the Soviet agent Tatiana Romanova. Taking place mostly in Istanbul, and the Orient Express, its plot is believed to be loosely informed by Fleming’s trip to Turkey as a reporter.

This first edition copy is inscribed to arms expert Geoffrey Boothroyd, who worked for the Imperial Chemical Industries in Glasgow in the manufacturing of ammunition. After reading Fleming’s first novel, Boothroyd sent the author a letter to inform him that the gun Bond was using — a .25 calibre Beretta — was an inappropriate choice for the character.

As Boothroyd clarified in an interview with the BBC in 1964, ‘I didn’t think Bond was going to last very long if he used a .25 Beretta pistol, which is a ladies gun, and used his chamois holster.’ Fleming, so persuaded by the argument presented in the letter, wrote the expert into the Bond world as an advisor on all arms-related matters.

‘Fleming was keen for his novels to be as accurate as possible,’ says Mark Wiltshire, ‘hence his delight at receiving such detailed advice from Boothroyd about the most likely gun to be used by a British secret service agent.’ The inscription reads ‘To Geoffrey Boothroyd, Herewith appointed ‘Armourer’ to James Bond.’ Additionally, it is the expert’s own .38 calibre Smith & Wesson revolver that served as the model for the dustjacket on this edition.

In 1959, Fleming was sent abroad on a trip paid for by the Sunday Times. It brought him to Asia, where over the course of five weeks he travelled through Japan, Macau, and Hong Kong, eventually returning to England by means of Honolulu and the continental United States. He wrote about the trip in a travelogue called Thrilling Cities, included in the deluxe edition by Queen Anne Press which comprises all of Fleming’s fiction and non-fiction works in a beautifully bound presentation set.

His journey, however, also served as the foundation for his 11th novel, You Only Live Twice, published in 1964. Included in this sale is a first edition inscribed from Fleming to Richard ‘Dikko’ Hughes, an Australian Far East correspondent for Fleming’s employer, The Sunday Times. An ex-boxer, and former part-time spy for MI6, Hughes served as Fleming’s guide during this trip.

Having written him and their Japanese guide Toreo ‘Tiger’ Saito into the novel as Richard Lovelace ‘Dikko’ Henderson, an Australian spy, and Tiger Tanaka, the head of Japan’s Secret Service, Fleming presented each with a personally inscribed edition. The book on offer, presented to Hughes, reads ‘To Dikko-san, from Fleming-san, with all affection.’

Following this novel, Fleming released three more instalments in the series while overseeing both film and television productions of his franchise. By the time his final tale was published in 1966, James Bond was a lifetime removed from the anonymous, nondescript name given to him 11 years prior.

In the myriad adaptations that have come since, the archetypal spy has been inextricably woven into the fabric of British culture. Wiltshire says that ‘James Bond in the novels is in many ways a product of Fleming’s time, but the ongoing success of the Bond films over the decades shows that this character can be updated and reinvented for modern audiences.’

‘The presentation copies offered in this sale are of great significance,’ he continues. ‘They are tantalizing, intimate, and exceptionally cool. A bit like Bond himself.’