THE TIPPING POINT. TEARS FOR FEARS 2022 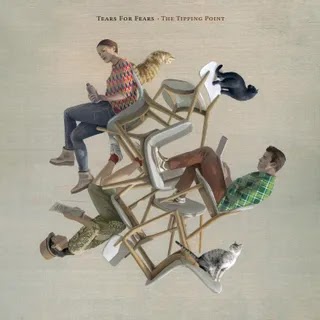 Sincerity is embedded in the DNA of Tears for Fears, the duo Roland Orzabal and Curt Smith formed in the early 1980s, when they were just out of their teens. Riddled with adolescent angst and besotted with psychotherapy, they named their group after a phrase from the writings of psychologist Arthur Janov, who pioneered primal scream therapy. Janov’s theory that psychic turmoil had its root in childhood trauma resonated. John Lennon introduced the practice into rock with his 1970 album John Lennon/Plastic Ono Band; Bobby Gillespie would later name his band after it. During those early years, Tears for Fears camouflaged some of their psychic pain with clamoring synthesizers and sprightly melodies, a combination that dampened the melancholy undercurrents of their first UK hit, “Mad World.” Yet the very title of their 1983 debut, The Hurting, made it plain they embraced sensitive emotional issues in a way that such new wave peers as, say, Adam and the Ants did not.

The Tipping Point, the duo’s first album in 18 years, feels spiritually connected to The Hurting. Where Tears for Fears spent their debut articulating roiling interior torment, writing as empaths as much as from experience, The Tipping Point is the work of middle-aged survivors who have absorbed the lessons of therapy and loss; its alternate title could’ve been The Healing. Orzabal in particular suffered a series of painful losses in recent years, chief among them the death of his wife of 35 years due to alcohol-related dementia in 2017. He subsequently went through a stint of rehab himself, an experience that led him to recognize the depth of his bond with Smith, a lifelong friend and collaborator.

The pair split at the dawn of the 1990s, an acrimonious fracture that took many years to mend. They reunited in 2004, delivering Everybody Loves a Happy Ending, an album whose very title carried an air of finality. For the next decade and a half, Tears for Fears tended to deluxe reissues of their catalog, mounting the occasional tour with fellow ’80s survivors and releasing covers of songs from new artists like Arcade Fire and Hot Chip. The audience wanted to hear the hits, the band’s management assumed; their reasoning carried over to the first attempt at a long-delayed successor to Everybody Loves a Happy Ending, which paired Orzabal and Smith with fashionable producers and songwriters in hopes of returning to the charts. Displeased with the results, Tears for Fears fired everybody—the collaborators, the management, the label—saved a few tunes, then wrote the bulk of The Tipping Point as they did The Hurting: Alone with guitars, sitting eyeball to eyeball.

That shared intimacy is apparent on The Tipping Point, a strikingly unguarded and forthright record. Tears for Fears never shied away from letting their feelings flood the page—underneath its rallying cry of a chorus, their breakthrough hit “Shout” is about moving forward with only what you truly need. The urgency has faded, and the bruises Orzabel and Smith now bear are evident in how they’ve softened their touch, allowing for moments of sweetly resigned reflection and an overarching sense of contentment. Apart from “Break the Man”—Smith’s pseudo-sequel to 1989’s “Woman in Chains” and an insistent, inspirational anthem for allies of the #MeToo movement—The Tipping Point benefits from being notably light on the kind of broad, open-ended anthems that were long a Tears for Fears speciality; these songs benefit from their specificity.

Naturally, Orzabal writes about his departed wife, hoping she finds peace on “Please Be Happy,” a stately, McCartney-esque ballad sweetened with swelling strings and muted trumpet. He spends “The Tipping Point” waiting for the moment when she passes from this world into the next. Heavy subjects, yet the sound of The Tipping Point isn’t weighty: It’s a warm, even soothing, blend of acoustic and electronic instruments. Tears for Fears also spike the record with a couple of numbers that break the contemplative spell, taking a swipe at their former management on the swirling, sneering “Master Plan” and ratcheting up the rhythm and volume on “My Demons,” the one cut that’s a clear throwback to their shiny ’80s synth-pop.

Despite these fleeting moments of ire, The Tipping Point is grounded by a sense of acceptance, a realization that life goes on—and is worth living—after periods of grief. Nowhere is that clearer than on “Rivers of Mercy,” a lovely, calming ballad that finds solace within images of flowing water washing away pain. Here, Tears for Fears intertwine the ideas that run throughout The Tipping Point, emphasizing grace and growth in the face of trauma. It’s the centerpiece of an album that feels like the most fully realized record Tears for Fears have ever made, a culmination of the musical and emotional themes they’ve held dear since their inception.