The exhibition, on view for the next 75 years, features 250 rare items from the library's collection.

The entrance to Treasures, a new exhibition at the Gottesman Hall exhibition gallery of NYPL’s Stephen A. Schwarzman Building. (photo by Max Touhey; courtesy NYPL) 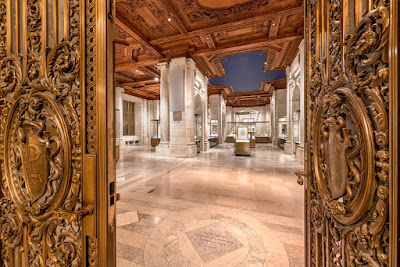 If Manhattan were a treasure map, “X” would mark the spot at Fifth Avenue and 42nd Street, the imposing headquarters of the New York Public Library (NYPL). The building has always been something of a trove, housing many of the more than 46 million items that make up the library’s research collections. Now, 250 of the rarest objects from this sprawling repository, which also includes NYPL’s Library for the Performing Arts and the Schomburg Center for Research in Black Culture, have been unearthed for the long-awaited Treasures exhibition, discoverable to anyone who walks through the library’s doors to the Gottesman Hall gallery.

“I’m not so much interested in what treasures are, but how things got to the library, and why we preserve them and provide access to them,” said the show’s curator Declan Kiely, NYPL’s Director of Special Collections and Exhibitions, in an interview with Hyperallergic. “For me, it’s an essential part of cultural heritage and memory.”

He points to a placard that reads “Honor King! End Racism!” in bold black letters. It was carried by Thomas Leach, one of 42,000 participants of the April 8 march organized four days after Martin Luther King’s assassination in 1968.

“That came into the collection because the son of the man who held that placard kept it for decades. It became important to him, and he gave it to his son, and his son gave it to the Schomburg Center,” Kiely said. “It’s one example, to me, of something that starts its life as a thing to be used for one day, for a few hours, to make a point. And it’s now a treasure.”

The show is a gold mine of foundational documents and masterpieces selectively culled from 4,000 years of human activity: Babylonian tablets inscribed in cuneiform script, the most ancient writing system; a handwritten copy of the Declaration of Independence, complete with Thomas Jefferson’s annotations; one of Shakespeare’s first folios; and a maquette of Augusta Savage’s sculpture “Lift Every Voice and Sing,” which was destroyed after its presentation in the 1939 World’s Fair.

Bill Simpson, a former professor who was perusing the show with his wife last Friday, was especially taken by the first printing of the King James Bible — the most widely published book in the English language.

“I’ve never seen an original of it, and it was stunning to see how large it was. [It] made me think how awkward it would have been to use,” he told Hyperallergic. “The library is probably the only place in the US that I know that would store and keep track of stuff like this, things that are so interesting for centuries of intellectual history, and I find that fascinating.”

Yet, some of the most gripping moments in this show are not textbook examples of primary materials, at least not in the traditional sense. There is Virginia Woolf’s walking stick, displayed in a glass vitrine next to a letter from her husband Leonard Woolf to her lover Vita Sackville-West, just days after Woolf drowned herself in the River Ouse behind their home in Sussex.