His entire life long, he was plagued by poverty, strokes of fate, drug excesses, and severe illness, with his earnings as an artist sufficing only to cover his rent and the barest necessities. But today, works by Amedeo Modigliani—a native of Livorno, Italy who died in his studio in 1920 at just 35 years of age—number among the most expensive, with individual paintings fetching nine-figure sums.

In view of his death’s 100th anniversary, Vienna’s ALBERTINA Museum is honoring Amedeo Modigliani (1884–1920) with a spectacular exhibition encompassing ca. 130 works from three continents. This showing, originally planned for the jubilee year of 2020, was postponed due to its importance and the pandemic: So it is only now that this fascinating, powerful artist will be featured for the first time in Austria. The present exhibition brings together major works from the most renowned museums and private collections all the way from the USA to Singapore and from Great Britain to Russia, with large numbers of works coming from the Musée Picasso in Paris and the collection of Jonas Netter, one of Modigliani‘s major patrons during his lifetime. The selection of works on exhibit serves to situate Modigliani within the context of a unique circle of avant-garde painters. 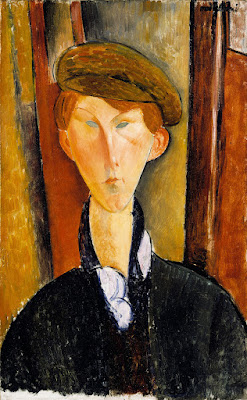 The story of Amadeo Modigliani, a painter and sculptor whose career and life met an early demise, could hardly be more dramatic: at the young age of 11, Modigliani suffered from a serious case of pleurisy. In 1898, at age 14, he contract typhus—an illness that was considered deadly at the time. Later on, he suffered from chronic tuberculosis—which ultimately cost him his life at the young age of 35. Two days following his death, his fiancée Jeanne Hébuterne (who was eight months pregnant) took her own life.

Art between archaic and avant-garde

On the one hand, Modigliani referred to the Renaissance in his works, but on the other hand, he also took up African, Egyptian, East Asian and Greek archaic art. The unique show at the ALBERTINA pays special attention to this lifelong exploration of the origins of art: Modigliani's oeuvre is juxtaposed with works by his counterparts Pablo Picasso, Constantin Brâncuşi and André Derain, as well as artefacts from prehistoric and non-European world cultures.


Modigliani’s legend-steeped life and his crossing of artistic borders occupy a special place in art history—without his having been a forerunner or pioneer of anything in the strict sense. Embedded in Paris’s Montmartre art scene, he engaged in exchange with the greats of his era and left behind for us impressive portraits of figures including Picasso, Matisse, and Diego Rivera—despite which he remained an undiscovered figure his entire life long. His success was hampered in part by the scandals caused by his supposedly pornographic paintings. Moreover, the Italian artist was ever the stylistic outsider and loner who pursued his own artistic ideals. And even so, his avant-gardist bridge-building between modern art and eras hundreds of years in the past continues to represent an outstanding and entirely individual contribution to art history. 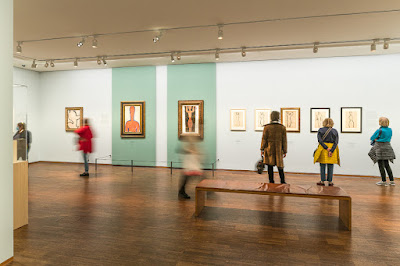 This showing is being curated by art historian Marc Restellini, who edited the Catalogue Raisonné of the Paintings by Amedeo Modigliani.

This exhibition is organized with the exceptional support of the Musée national Picasso-Paris.