On Tuesday 8 June, Galleria Borghese opened a new exhibition by Damien Hirst, curated by Anna Coliva and Mario Codognato. Over 80 works from Hirst’s Treasures from the Wreck of the Unbelievable series are displayed throughout the museum alongside ancient masterpieces. The exhibition features both monumental and small scale sculptures made from materials such as bronze, Carrara marble and malachite. Hirst’s Colour Space paintings, exhibited for the first time in Italy, are also presented together with the permanent collection, while his colossal sculpture, Hydra and Kali, is displayed outdoors in the Giardino Segreto of the Uccelliera. 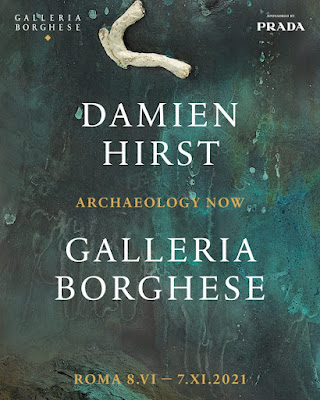 The project is made possible thanks to the generous support of Prada, which investigates areas of research such as art, architecture, philosophy and literature with the aim of developing innovative languages and projects, in a continuous dialogue with the broader scenarios of contemporaneity.

Hirst’s works are displayed throughout Galleria Borghese, a museum with a superb collection of masterpieces of classical Roman sculpture, Italian paintings of the Renaissance and the 17th century, and the most important works of Bernini and Canova. At the same time – and this is its uniqueness – it is a place with rich, ornate interiors of marble, stuccos and mosaics. The works by Hirst complement the range of inventions and techniques seen in the museum’s collection, showcasing the artist’s incredible ability to combine concepts and narratives with the exceptional skills needed to create these complex works, which has been a constant of this institution.

This project stems from one of Hirst’s most original projects of the last twenty years: Treasures from the Wreck of the Unbelievable, which was exhibited for the first time in 2017 in Venice at Palazzo Grassi and Punta della Dogana. Here, he worked with a variety of materials – natural, technological, and precious – with exceptional technique and skill. Made from marble, bronze, coral, rock crystal, and semi-precious stones, and inserted among the masterpieces of the Galleria’s collection, these works celebrate the desire for variety held by the museum’s founder, Cardinal Scipione Borghese. His fantasy had been to go beyond categories, not only among the arts, but also those of fiction and reality.

The exhibition also presents a group of paintings from Hirst’s 2016 series titled Colour Space, which constitutes both a development of his Spot Paintings and a retrospection of the first work of that series, in which the spots were painted freely. Colour Space shows the infiltration, in Hirst’s words, of “human elements”. These works are like “cells under a microscope”. They refute the idea of a unified image; they float in space, bumping into and merging with one another, with a sense of movement that contradicts the stasis of the canvas.

Damien Hirst was born in 1965 in Bristol, grew up in Leeds, and from 1986 to 1989 studied Fine Art at Goldsmiths College in London. In 1988 he conceived and curated the group exhibition Freeze, which became a springboard not only for Hirst, but for an entire generation of young British artists. Since the late 1980s, Hirst has created installations, sculptures, paintings, and drawings that explore the complex relationships between art, beauty, religion, science, life, and death. Through work that includes the iconic shark in formaldehyde, The Physical Impossibility of Death in the Mind of Someone Living (1991) and For the Love of God (2007), a platinum cast of a skull set with 8,601 flawless pavé-set diamonds, he investigates and challenges contemporary belief systems, and dissects the uncertainties at the heart of human experience.

Published by Marsilio in Italian and English, the exhibition catalogue contains critical essays by Anna Coliva, Mario Codognato, and Geraldine Leardi, as well as photos of the exhibition.