From its location in the heart of a vast forest in the Île-de-France region, the Palace of Versailles has always fostered a new relationship with the animal kingdom. From animals as objects to be studied or collected to those used as political attributes and symbols of power, what were the relationships between the Court and the domestic, wild and exotic species of the animal world? 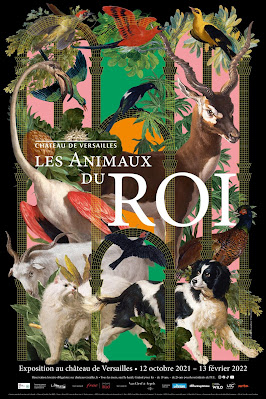 The exhibition aims to illustrate the bond between the Court of Versailles and animals, whether “companion animals” (dogs, cats and birds, mainly), exotic beasts or “wild” creatures. No study of the Palace during the reign of Louis XIV would be complete without considering the Royal Menagerie, which the Sun King had installed close to the Grand Canal. It was home to the rarest and most exotic animals – from coatis to quaggas, cassowaries to black-crowned cranes (nicknamed the “royal bird”) – constituting an extraordinary collection in which the king took ever greater pride.

The animals in the menagerie were also a great source of inspiration for the artists of the time: they helped Claude Perrault with his Natural History, as well as serving the Royal Academy of Sciences as subjects for dissections and, later, Louis XV and Louis XVI, in their naturalism pursuits.

As well as the actual animals that were collected and studied, animal symbolism was used to represent power. The exhibition illustrates the link between the establishment of Versailles as a seat of power – from the construction of the Palace itself on the site of Louis XIII’s old hunting lodge – and animal symbolism.

Part of the exhibition is devoted to the daily hunt – a key activity pursued by warrior kings in times of peace as a form of training and demonstration of power. Consequently, it features prominently in royal iconography.

The exhibition aims to shine a new light on the animals of Versailles and help visitors discover the key aspects of animal life on the Estate. The symbolic and political natures of animals are also evident in the décor of the Palace. Their use as symbols, particularly those inspired by ancient and medieval stories of nature, is extensive, bringing a new dimension to Versailles.

In addition to decorative items from the interior of the now long-lost menagerie – in particular, the paintings by Nicasius Bernaerts – there are well-known garden sculptures, such as those in the Latona Fountain and the Maze. The latter, which no longer exists, comprised no fewer than 300 animals made from lead, arranged into a scene from Aesop’s fables and depicting a vision of the world in which animals make political, often moralising, always educational, pronouncements. In all, 37 sculptures recovered from the erstwhile grove will be on display.

The animals themselves will return in droves to Versailles, because they never disappeared completely. They live on in the work of the king’s top painters: from Bernaerts, Boel and Le Brun to Desportes and Oudry, many artists produced portraits of these exotic, wild and more familiar animals. As well as paintings, there will be portraits woven by the Gobelins Manufactory plus animals that were dissected, engraved, then preserved at the Academy of Sciences and in the King’s Garden, which is now the National Museum of Natural History. On display will be the skin of the Asian elephant gifted to Louis XV, which was donated to the Pavia Museum by Napoleon, and the skeleton of the very first elephant at Versailles, which was presented to Louis XIV by the king of Portugal and lived at Versailles for 13 years.

The exhibition will focus on the place and role at Court of companion animals to both the royal family and courtiers. Companion animals were present everywhere, enlivening the royal apartments, brightening up the daily lives of children and adults alike, as is evident from many portraits. It is clear that many of the sovereigns, such as Marie Lesczcynska, wife of Louis XV, chose to surround themselves with their favourite animals.

The Court’s interest in the animal world led to greater sensitivity towards animals, in direct contrast to the Cartesian theory of animal-machines. Madame Palatine and, later, Madame de Pompadour, were particularly passionate about them.