The sound of the Gürzenich Orchestra is perfectly suited to this romantic repertoire.

He paved the way for modernity – this is François-Xavier Roth’s understanding of Anton Bruckner with his monumental symphonies. In honour of Bruckner’s 200th birthday in 2024, a cycle of all symphonies is in the making:

»In his day, Bruckner was definitely misunderstood by his audience. Even some of his admirers tried to convince him to make changes to his visionary works of art, the architecture of his creations being too much to grasp. With this Bruckner cycle, my wish is to change the perspective on his music. I would like the audience to join me in discovering the utopic aspects of his works: Bruckner the visionary. When I first played Bruckner with the Gürzenich Orchestra in my debut as chief conductor in 2015, it immediately became clear to me that we would have to perform all symphonies. The orchestra’s sound is a perfect match for this Romantic repertoire.« 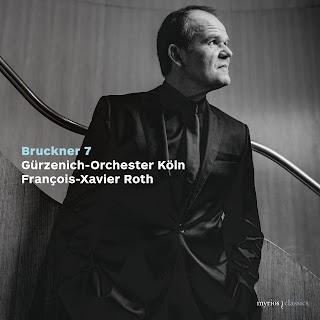 The first CD of the cycle is dedicated to the Seventh Symphony. Bruckner composed this piece in the wake of the catastrophic, deadly fire in the Vienna Ringtheater on December 8th, 1881, and also under the impact of Richard Wagner’s death in February of 1883 – a composer whom he had deeply worshipped. Yet within the sadness lies an inextinguishable yearning for redemption, and a musical language that is fascinating in its boldness and modernity. Its premiere in 1884 finally brought forth the wide recognition Bruckner had longed for.

The next CD with Anton Bruckner’s Fourth Symphony is planned to be released soon after, in June 2022.

A co-production with Deutschlandradio

Also available on the relevant streaming and download services.