Tasteful and polite, or riotous and pleasure-obsessed? Discover the Georgians as they really were, through the objects that tell the stories of their lives.
From beautifully furnished homes to raucous gambling dens, Georgians Revealed explores the revolution in everyday life that took place between 1714 and 1830. Cities and towns were transformed. Taking tea, reading magazines, gardening and shopping for leisure were commonplace, and conspicuous consumption became the pastime of the emerging middle classes. 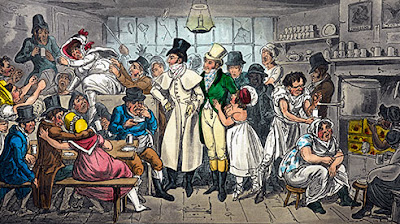 Popular culture as we know it began, and with it the unstoppable rise of fashion and celebrity. Art galleries, museums and charities were founded. In this time of incredible innovation, ideas were endlessly debated in the new coffee houses and spread via the information highway that was mass print.
Drawing on the British Library’s uniquely rich and rare collections of illustrated books, newspapers, maps and advertisements, as well as loaned artworks and artefacts, Georgians Revealed brings to life the trials and triumphs of the ordinary people who transformed Britain forever.