WISE MEN FROM THE EAST ZOROASTRIAN TRADITIONS IN PERSIA AND BEYOND

This small exhibition will explain Zoroastrianism, an ancient but living religion named after the Prophet Zarathustra, through objects and coins from Persia (Iran) and beyond.
The display will feature a variety of ancient and modern objects and coins, and will highlight the importance of Zoroastrian traditions in other religions. It will touch on the concept and imagery of the Three Kings of the Christian tradition, who are described in the New Testament (Matthew 2.2) as Magi from the east – Zoroastrian priests in the Persian tradition. Magnificent Islamic coins from Mughal India which follow the Iranian Zoroastrian calendar adopted by the emperor Akbar (1556–1605) will also be on display. 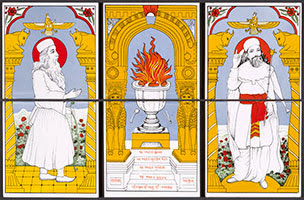 Modern objects will show the ongoing legacy of this ancient Iranian religion and its significance as a symbol of national identity for Zoroastrian and non-Zoroastrian Iranians in modern Persia and beyond.