INSIDE THE STEINWAY FACTORY BY CHRISTOPHER PAYNE

I first heard of photographer Christopher Payne through his work in  Asylum: Inside the Closed World of State Mental Hospitals. In the early 1980s, my mother was a social worker in the now abandoned Pilgrim State Hospital in Brentwood, Long Island, the very institution which inspired Payne to document closed mental facilities all around the country. We later interviewed him for the Untapped New York piece on New York City’s substations based on his work for the book  New York’s Forgotten Substations: The Power Behind the Subway.
Then I saw that Payne documented the Steinway & Sons factory in Queens. I remember going to Steinway Hall with my mother when I was four to pick out the B model grand piano she still plays in the living room. It sits diagonally from the first Steinway she owned, an upright piano.  Steinways were the best pianos in the world–a statement that was not up for debate in our house.  We had our own version of dueling pianos at home, especially when my kindergarten playmate (who later toured with Lady Gaga, Kanye and Beyonce) would come over and recreate by ear the concertos my mother would be practicing. It was my first brush with musical genius. 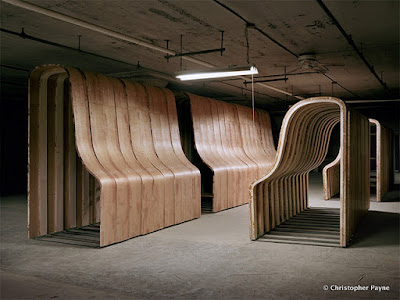 Steinway Hall was a strange place and my memories of it are filled with conflicting emotions. I remembering looking around in wide-eyed wonder–there were more pianos in one room than I had ever seen before. My mother tried them one by one and  I could tell she had her ear out for something very specific. Architecturally, I could sense that we were in a place with a long history, but there was an oppressiveness to it that made me feel very, very small.
Now having studied architecture, the neoclassical rotunda of Steinway Hall with its fluted Corinthian columns, coffered vaulting and Baroque-painted dome, melded with old fashioned gilded frame paintings, carpeted floor and enormous chandelier, represents a particular conflict in the history of American architecture and interior decor, first attacked in literature by Edith Wharton  as the style of the old guard. I am comforted knowing that my conflicting sensory messages at age four were not unfounded. The opposing forces of tradition and technological advancement seem to form the core of the Steinway & Sons company, concepts which are deeply explored in Christopher Payne’s work. 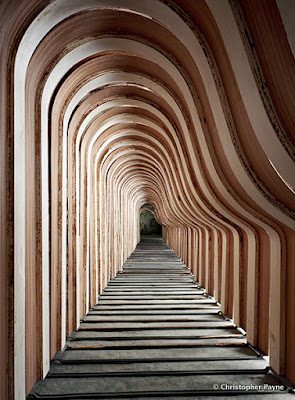 The Steinway factory at One Steinway Place in Astoria, Queens is the opposite of Steinway Hall: light, airy, functional, devoid of ornamentation (except for Wally’s World, showcasing the memorabilia of an employee in the tone regulation department who has been with the company for 50 years). Today, Steinway pianos are built in the same way they were in the 19th century. In an openhousenewyork talk at the South Street Seaport Museum last week, Payne told the audience that the company is using the same “industrial processes that were cutting edge” when first developed, and many were invented specifically for the construction of pianos.
“As a photographer trained as an architect,” Payne says, he’s drawn to “how things work.” But while his photography captures the essence of how a piano is constructed, it is by no means a step-by-step account. He’s interested in “unexpected abstractions,” leading the viewer to recreate a process out of fragments. As a conceptual exercise, he wondered how much he could “edit out and it still be a piano.”
In the end though, the conceptual exercise wasn’t enough. He thought if he “could get inside and dissect [the factory], master it like a musician masters an instrument,” he could capture the essence of the place. Instead, he’s developed a respect for the blend of machinery and humanity that it takes to make a piano.  He wanted this series to be “specifically about Steinway” and his photographs of the Steinway factory capture moments, both material and human. Each of the workers he photographed has a story, and together, making a piano is like a choreographed dance. 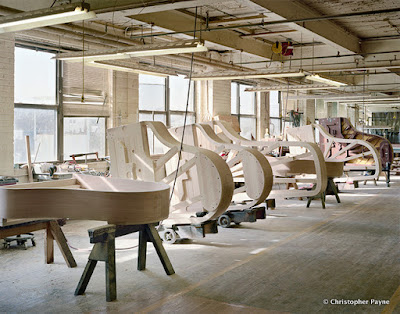 You can clearly see Payne’s architectural training in his photography. It is precise, meticulously framed, and process driven. He’s interested in how the logic of manmade construction can form abstractions through light, shadow and repetition. And, in his abandoned photography, how nature slowly reclaims these forms when they’re left behind. There’s much that tie together his different projects, but the most important element, in my opinion, is time–the passage of time, a moment in time, time as process.
It takes one year to make a Steinway piano, which is made of 12,000 parts. Steinway & Sons makes only 1,500 pianos per year. As my mother describes, “Each piano is different. When you first buy it, it’s not broken in yet. You need to play it to develop the sound. You need to take care of it.” Part of the art of picking pianos is foreseeing how an instrument will mature over time, like a living, breathing thing. It’s said in my family that even before I was born, they knew I’d be a musician because I’d kick my mother in the womb while she played piano.  Around the time of the Steinway Hall visit, I begged my mother to learn piano so I could be just like her. I remember staring often at the slightly raised gold Steinway & Sons logo on the side of the grand piano and running my fingers over it with my left hand. As I write this article in the house I grew up in, I see that the left side of the logo is worn–the S, T, E letters needing polish after years of a grubby child’s hand absently musing about the details on a piano. Christopher Payne showed me exactly how those letters came to feel that way–the black paint on the pianos is sprayed around the brass stencils that say STEINWAY & SONS.
Cello later become my primary instrument as I continued my musical training at Juilliard, but the hallowed place of our Steinway piano remained. Fewer and fewer people know how to make music from an instrument, says Payne, and implicit from his work is the sense that even fewer know the craftsmanship it takes to build an instrument.
I’ll close this article with Payne’s own words:
My Steinway photographs are…a deconstruction of something we all know and love as a whole. The kind of manufacturing and craftsmanship that happens at One Steinway Place, where people transform raw, messy materials into some of the finest musical instruments in the world, has nearly vanished from the American workplace. This concerns me deeply, not only because I come from a musical family in which such craftsmanship was revered, but because I live at a time when fewer and fewer people make their own music. Steinway is not disappearing, not by any means, but the opportunity to look deep inside it revealed to me one of the supreme and most discerning accomplishments of the human hand and imagination.
Christopher Payne’s photography of the Steinway factory is on display at the Bonni Benrubi Gallery until Saturday, September 29th. More of his work can be seen on his website and Facebook page.