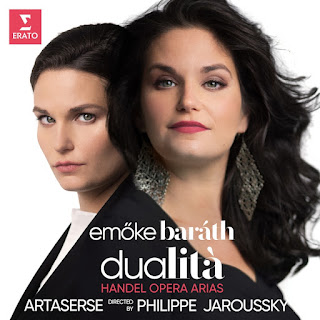 In Dualità, an album of arias from nine Handel operas, soprano Emőke Baráth explores “the duality of the female soul – in which sensitivity unites with power” and the potential of the female voice to characterise both heroines and heroes. At the same time, she provides an insight into the careers of her 18th century counterparts, notably the prime donne of Handel’s opera company in London. Baráth is partnered by Artaserse under the direction of Philippe Jaroussky.

AND A BOOK, BY A FAMOUS MEXICAN SINGER AND DIRECTOR

The novel follows Vian Maurer, a young man living in Salzburg who dreams of becoming an opera singer. Because of a strict father and singing teachers who argue over whether he is a tenor or baritone, Vian is only cast as a supernumerary in local production Mozart’s Don Giovanni. Vian travels throughout Salzburg, discovering the magic of his beloved composer’s hometown in this lighthearted and joyful homage to Mozart.

Amadeus en bicicleta will become available to Latin American audience this May. Click here to read an excerpt from the novel.