Journey back 4,500 years to the Giza plateau in ancient Egypt, where a group of artists and their patrons devised a new way of representing the human body in sculpture. Commanding in presence and sublime in aesthetic, their works represent a pinnacle of artistic innovation. For millennia, the Egyptians looked back on the sculpture of this period as benchmarks to follow. 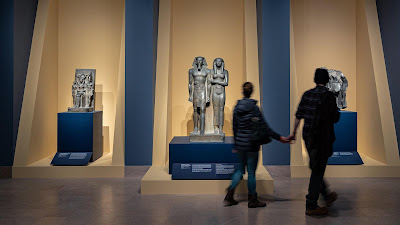 “Masterpieces of Egyptian Sculpture from the Pyramid Age” tells the story of this artistic moment and the culture that shaped it through some of the singular landmarks of the Old Kingdom (2575–2150 BCE). The bust of Prince Ankhhaf, the man who oversaw the completion of the Great Pyramid, is the most convincing example of realistic portraiture to survive from the Old Kingdom. The pair statue of King Menkaura and queen is one of the most famous Egyptian sculptures in the world. These and every other work on display—all of them undisputed masterpieces—have been in the MFA’s collection since the first part of the 20th century, when they were excavated in Egypt by the Harvard University–Boston Museum of Fine Arts Expedition. Through maps, diagrams, photographs, and firsthand accounts, this gallery also sheds light on how they came from Giza to Boston more than a century ago.

The adjacent gallery, “Faces of Ancient Egypt,” illustrates the breadth of approaches sculptors took in creating distinctive likeness over 2,000 years of Egyptian artistic development. From the Twelfth Dynasty and the Late Period, respectively, the Josephson and Boston Green Heads are sensitive portrayals of a nobleman and a priest with startlingly realistic features. Meanwhile, a portrait of Pharaoh Amenhotep III from the Eighteenth Dynasty smiles broadly without a single crease in its cheeks, making it more of an elegant mask than a lifelike depiction. 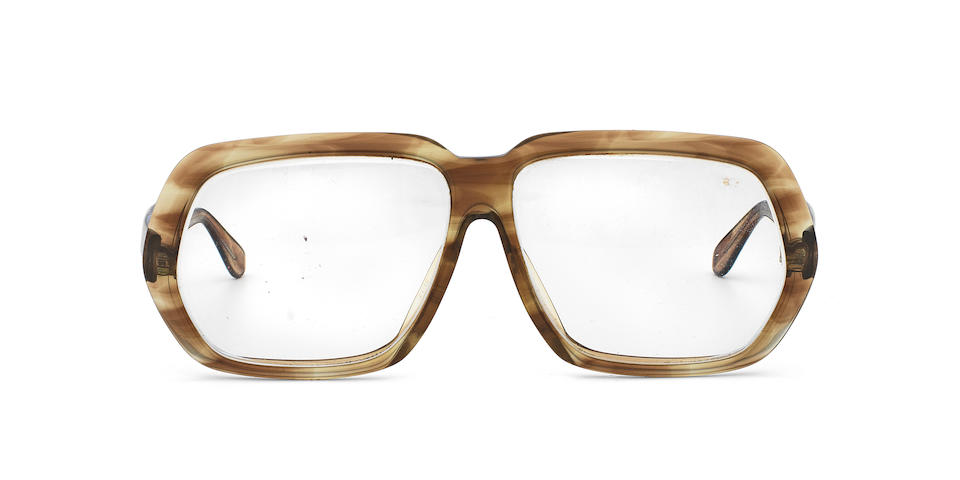 London – Few film actors have been at the top of their game for as long as Sir Michael Caine. For six decades, he has lent presence and distinction to every role he has undertaken – from the era-defining Alfie to classic films such as Get Carter, Zulu and Educating Rita; from his Oscar-winning performances in Hannah and Her Sisters and The Cider House Rules to Batman's unflappable butler, Alfred.

Now, as Sir Michael starts taking life at a more leisurely pace, he and his wife, Lady Caine, are downsizing and putting some of their treasured possessions up for auction. Sir Michael Caine: The Personal Collection will be sold at Bonhams on Wednesday 2 March 2022. The sale contains a wonderful selection of items reflecting the breadth of Sir Michael's career, ranging from movie posters, furniture including his desk, works of art and fine art, such as Les Amoureux dans l'arbre by Marc Chagall (estimate £30,000-50,00) – and his iconic spectacles (estimate: £800-1200).

Sir Michael Caine said: "It's going to be quite a wrench to part with so many treasured parts of my life and career, but it's the right time to be moving on. I hope these mementoes will give their new owners as much pleasure as they have given us."

• Film poster for Alfie. One of Caine's most memorable screen roles earned him nominations for Best Actor at the 1967 Academy Awards, the Golden Globe Awards and BAFTA. Estimate: £500-800.

• A director's chair for Michael Caine with associated Get Carter back rest. Estimate: £800-1,200.

Among the other highlights of the sale are:

• A Portrait of Sir Michael Caine by Lincoln Townley. The painting is being sold in aid of the NSPCC, of which Sir Michael and Lady Caine have long been strong supporters. Estimate: £10,000-15,000.

Sir Peter Wanless, CEO of the NSPCC, said: "Sir Michael Caine is a longstanding Ambassador of the NSPCC and we are touched and extremely grateful he has chosen us to donate all the proceeds raised from the sale of this fantastic portrait of him to such an important cause.

"We also thank the artist, Lincoln Townley, and Bonhams for waiving their vendor's commission from this upcoming auction. Fingers crossed the painting is sold for a price that is befitting of Sir Michael's considerable talents and generosity."