In Colette Lumière’s world, the theatricality of Versailles meets the punk ethos of the Sex Pistols. 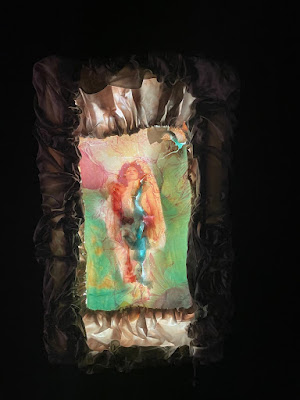 Though she symbolically died from a staple cut at the Whitney Museum in 1978, Colette is alive and well. Resurrected a few days later as Justine, lead singer of a newly formed band, Justine and the Victorian Punks (a collaboration with Peter Gordon’s Love of Life Orchestra), Colette recalls in a 2013 BOMB magazine interview with Katie Peyton that her performative death was a critique of artists often having to wait until their passing to be recognized (which is particularly the case for women). And indeed, it is an indisputable fact that the French-Tunisian Colette Lumière is a severely under-recognized artist, whose lasting importance on visual culture and performance practice has yet to be fully grasped by the art world. Before moving to Berlin in 1984, Colette was a prolific artistic persona immersed in the 1970s New York art scene, a punky Marie Antoinette with a childlike voice and fashion confections. Working across a variety of media, yet always emphasizing the performance of identity, her creations ranged from frilly dresses and punk T-shirts to sculptural installations, light boxes and short films.

Before Tilda Swinton ever slept in the glass box constructed by Cornelia Parker at MoMA, Colette incorporated sleep as an endurance practice in several of her performances. Between 1972 and 1983, the artist created a gesamtkunstwerk by turning her downtown loft into what she has termed “a living environment,” an immersive installation in which she herself is activated as a living sculpture. The current exhibition at Company gallery, Notes on Baroque Living: Colette and Her Living Environment, 1972-1983, curated by Kenta Murakami, takes the latter as its foundation. Entering Colette’s reconstructed living environment feels like stepping into a dreamlike universe saturated in a palette of crème and light pinks. Spread throughout the gallery are mixed-media wall fragments, light boxes, sculptures, garments and objects, as well as film footage and framed postcards. In Colette’s world, the theatricality of Versailles meets the punk ethos of the Sex Pistols, and ruched silky fabric is a signature material that you can’t possibly have too much of. The artist’s own likeness is omnipresent; photographs are embedded in the majority of the pieces, and her image is featured in the performance announcements and documentation. A large sculptural installation titled Notes of Baroque Living (1978-1983/2021), reconstructed from original elements of her living environment, centers a life-sized doll sculpture of Colette, made in collaboration with Company artist Cajsa von Zeipel.

During a decade that witnessed a preponderance of conceptual art, as well as an emerging Pictures Generation that denounced the notion of authenticity even as artists returned to representation, Colette’s practice is nothing short of radical. Her performance of identity, embodying a number of personas in addition to Justine throughout the years, is combined with a deep dedication to materiality that is rare in performance art, by its nature an ephemeral form. The “baroque” element referenced in the title does not simply point to extravagance and taste for dramatic lighting. What Colette shares with the Baroque movement is a brilliant ability to eliminate the boundary between art and life, between the space of the viewer and that of the artwork, creating a truly immersive environment.