"FROM THE DEPTHS OF ARABIA: A SOUTH ARABIAN STELE FROM THE AL THANI COLLECTION"

From 5 October 2021, the exhibition “From the Depths of Arabia: A South Arabian Stele from The Al Thani Collection” will be running in the Apollo Hall of the Winter Palace. 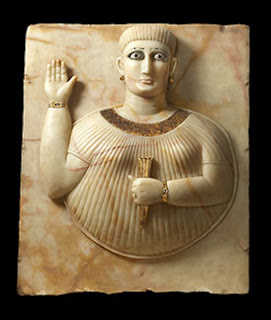 The Hermitage is continuing to acquaint its visitors with the history of ancient Arabia. Over the past decades, the museum has held exhibitions devoted to the ancient civilizations of Saudi Arabia, Kuwait, Oman and Bahrein. The upcoming exhibition tells about mysterious and idiosyncratic South Arabia. The origins of this civilization go back to the early Iron Age – the late 2nd and early 1st millennium BC, while the extent of the lands on which it evolved roughly coincides with the borders of present-day Yemen (which is why it is also called ancient Yemeni). Today we know of many polities that at various times were located on the territory of South Arabia, but the most famous of them would be Saba – due to the biblical legend about the Queen of Sheba who visited King Solomon bringing rich gifts.

The foundations of the region’s prosperity lay in extensive international trade in incense and spices, above all frankincense and myrrh. Some of these products originated in South Arabia itself, but the transit trade in goods on their way from India and East Africa to the Eastern Mediterranean, Egypt and Mesopotamia also played a very important role.

The Greeks and Romans referred to this region as “Happy, or Flourishing, Arabia” (Eudaemon Arabia, Arabia Felix), emphasizing its wealth and affluence.

In the last centuries BC and first centuries AD, South Arabia, like other parts of the East came under the strong influence of Greco-Roman culture. It is from that particular period that the object dates to which the new exhibition is dedicated – a stele bearing a relief depiction of a woman clutching a handful of ears of wheat.

The work was created in the traditions of South Arabian art, where such dedicatory or funerary steles depicting people holding some kind of attribute, often just such a bundle of ears of grain, were a common genre. All the details of this particular piece, however, testify to the strong influence of the art of Classical Antiquity. On the splendid lady’s face, massive bronze eyelashes stand out, along with the inlaid eyes and traces of inlaid eyebrows. Real earrings have been threaded through her ears, perhaps the very ones that she wore in life. The remaining adornments are carved in relief and gilded: a wide necklace, sumptuous bracelets on her wrists and a ring that forms a set with them. Such jewellery, studded with precious stones, was typical for the whole of the Hellenistic and Roman East. The Hermitage collection includes examples similar to those shown on the stele. although they come not from Yemen but, most probably, from Syria. They are displayed next to the stele so that visitors can get an idea of what such adornments looked like in reality. The loving depiction of the details of the woman’s jewellery makes the South Arabian stele akin to artefacts from Palmyra in Syria and from other countries of the Middle East.

This is the third exhibition organized by the State Hermitage jointly with The Al Thani Collection. Like the first two, the centrepiece is shown in the context of other exhibits from the Hermitage’s stocks. The Hermitage’s collection of South Arabian objects is fairly diverse. Among other things, it includes funerary and dedicatory inscriptions from the period between the 7th century BC and the 2nd century AD, as well as coins that date from the Greco-Roman era, as does the stele itself.

Research into the South Arabian civilization has been developing successfully in Russia for half a century now, with an important centre having always been the Russian Academy of Sciences Institute of Oriental Manuscripts (previously the Leningrad branch of the Institute of Oriental Studies), which is another contributor to the exhibition, providing celebrated small bronze tablets from its collection for the display. The year 1982 saw the creation of the Soviet-Yemeni Multidisciplinary Archaeological Expedition that brought together scholars from various research institutions in this country and wrote an important chapter in the history of the study of South Arabia.

A catalogue has been produced for the exhibition that tells about the history of South Arabia in ancient times and of Russian research into that civilization, as well as providing a detailed analysis of the stele within the context of similar Middle Eastern artefacts. It is the work of an international team of authors: Mikhail Piotrovsky; Alexander Sedov, Doctor of Historical Sciences, General Director of the State Museum of the East, head of the Soviet-Yemeni Expedition in 1991–93 and of the Russian Archaeological Mission of the Russian Academy of Sciences Institute of Oriental Studies in the Republic of Yemen in 1993–2013, a corresponding member of the German Archaeological Institute; Sergei Frantsuzov, Doctor of Historical Sciences, head of the Department of the Near and Middle East at the Institute of Oriental Manuscripts and a participant in the Soviet-Yemeni Expedition; Doctor Jasper Gaunt, Curator of Ancient Art for The Al Thani Collection; and Doctor Kenneth Lapatin, Curator of Antiquities for the J. Paul Getty Museum.

The temporary exhibition “From the Depths of Arabia: A South Arabian Stele from The Al Thani Collection” can be visited as part of both fixed routes around the Main Museum Complex – No 1 (entry by the Jordan Staircase) and No 2 (entry by the Church Staircase).