KURT MASUR, THE GERMAN CONDUCTOR WHO LED THE NEW YORK PHILHARMONIC ORCHESTRA, HAS DIED IN THE US AT THE AGE OF 88.

Philharmonic President Matthew VanBesien said Masur had "left a legacy that lives on today".
Masur was music director of the philharmonic from 1991-2002 and is credited with reinvigorating it.
Prior to that he led the Leipzig Gewandhaus Orchestra in eastern Germany for 26 years.
In the celebrations marking the reunification of Germany on 3 October 1990 he directed Beethoven's Ninth Symphony.
As the East German regime collapsed in the 1980s, Masur was credited with using his influence to help prevent a bloody crackdown on pro-democracy protesters.
Many thought he should become East Germany's first post-Communist leader but instead he moved to the US. 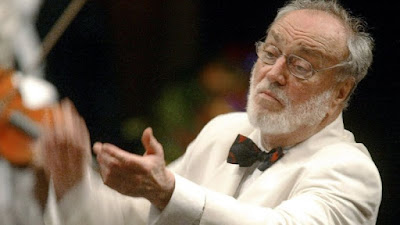 Masur's death on Saturday was announced by the New York Philharmonic.
"It is with the deepest sadness that I write on behalf of the Masur family and the New York Philharmonic that Kurt Masur - our inspiring music director, 1991-2002, and music director emeritus - passed away," Mr VanBesien said.
is survived by his third wife, Tomoko
"What we remember most vividly is Masur's profound belief in music as an expression of humanism. We felt this powerfully in the wake of 9/11, when he led the philharmonic in a moving performance of Brahms's Ein Deutsches Requiem and musicians from the orchestra gave free chamber concerts around Ground Zero.
"Today, New Yorkers still experience this humanist mark through the popular Annual Free Memorial Day Concert, which he introduced."
Masur served as the principal conductor of the London Philharmonic between 2000 and 2007, after which he became honorary musical director at the Paris-based National Orchestra of France.
In April 2012 he fell off the stage while conducting the National Orchestra of France in Paris and was treated in hospital.
The same year, after cancelling several concert engagements, he revealed on his website that he was suffering from Parkinson's disease.
Masur was born in 1927 in Lower Silesia, Germany - now part of Poland - and studied piano, composition and conducting in Leipzig, Saxony.
He is survived by his third wife, Tomoko, a soprano from Japan, and five children.