LOOKING AT THE BIRTH OF LEWIS CARROLL’S ‘ALICE,’ 150 YEARS OLD 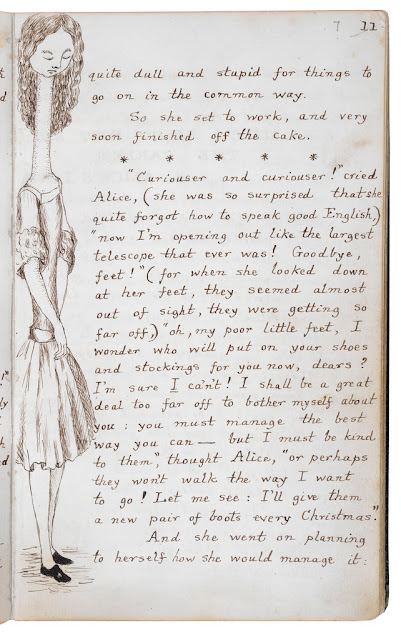 THE chief virtue of “Alice’s Adventures in Wonderland,” G. K. Chesterton once wrote, was Lewis Carroll’s celebration of flux, an escape “into a world where things are not fixed horribly in an eternal appropriateness, where apples grow on pear-trees, and any odd man you meet may have three legs.”
But for the generations that have surrounded the Alice tales with a fiercely protective love, the attraction of such mutability might not extend to the book itself and its sequel, “Through the Looking-Glass.” Consider the following nightmarish alternate universe: An author with the starchy pen name of Edgar Cuthwellis publishes a book with the flat-footed title “Alice’s Doings in Elf-Land,” or maybe the slightly less awkward but still pedestrian “Alice Among the Goblins.” His later book includes a mock-tragic ballad not about a walrus and a carpenter but about a walrus and a butterfly. Or maybe a baronet. Does a baronet sound better?
The Morgan Library & Museum’s captivating “Alice: 150 Years of Wonderland,” which opens on Friday as the newest entry in the crowded worldwide celebration of the 1865 publication of “Alice’s Adventures in Wonderland,” tells these kinds of unsettlingly Carrollian stories about the making of the stories Carroll began spinning for the three Liddell sisters — Lorina, Edith and Alice — on that famous Friday afternoon rowing trip up the Thames in 1862. 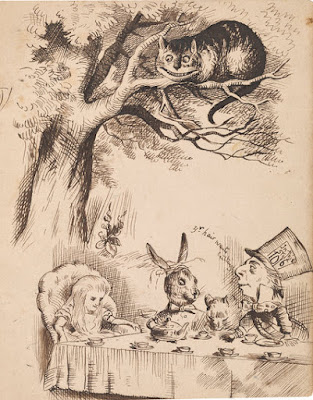 Publishing histories are almost always entertaining, especially when they concern revered works impossible to imagine other than as they are. (“War and Peace” as “All’s Well That Ends Well,” one of Tolstoy’s original titles? “Gone With the Wind” as “Tote the Weary Load”?) But with Carroll, who drove publishers crazy with his fastidiousness, the revelation in the documents and mementos the Morgan has brought together is the unmistakable — and altogether fitting — making-it-up-as-he-went quality of the Alice tales. The aura of improvisation applies at least doubly to the persona of Lewis Carroll adopted by Charles Lutwidge Dodson, venerable, finicky and socially maladroit Oxford don.
The exhibition, organized by Carolyn Vega of the Morgan’s literary and historical manuscripts department, comes just after the United States publication of a splashily well-received new biography, “The Story of Alice: Lewis Carroll and the Secret History of Wonderland,” by Robert Douglas-Fairhurst. The Morgan show is kicking off what will become a lively late summer and fall of Aliceiana, from the Rosenbach Museum & Library in Philadelphia to the Grolier Club in New York. But the Morgan, which is drawing on its own deep holdings of Carroll material, has secured the Hope Diamond of Alice bibliography: the handwritten, hand-illustrated original manuscript, “Alice’s Adventures Under Ground,” which Carroll gave as an early Christmas present to Alice Liddell in 1864 and which the British Library, its permanent home, is allowing to visit the United States for the first time in more than 30 years. 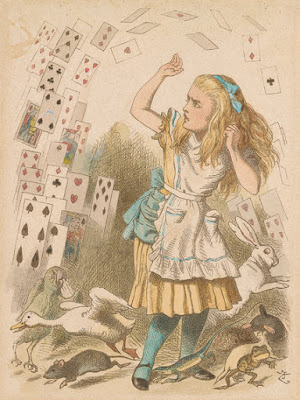 The 90-page, green-morocco-bound book rarely travels even in Europe. And when it does leave London — being almost as close to an ur-text of the British soul as Magna Carta or Shakespeare’s First Folio — it is accompanied by security measures whose details are cloaked in obfuscation befitting Tweedledum and Tweedledee. Jamie Andrews, the head of cultural engagement for the British Library, said that it was not checked on the flight over (“We don’t freight things like that”), but he would not say exactly where it was on the plane or who exactly was with it.
It did cause a minor stir at the airport. “I showed the customs form to the customs guy at J. F. K.,” Mr. Andrews said. The man looked at the declared value of the manuscript, a number Mr. Andrews would not divulge. “And he said, ‘Jeez, son, what have you got in there, the crown jewels?’ And in a sense it is our crown jewels.”