PARIS — The new triple bill of ballets at the Paris Opera — named, after its choreographic auteurs, “Christopher Wheeldon, Wayne McGregor, Pina Bausch” — demands three thoroughly unalike styles from its dancers. Yet the company’s dancing in each is a tremendous pleasure: three-dimensional in texture, keen in dynamics and, most welcome of all, proceeding through long, multifaceted phrases. 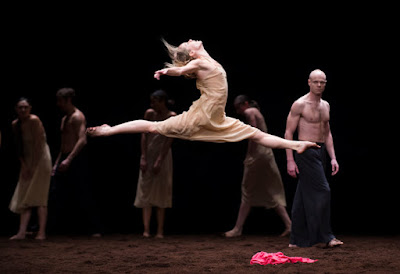 What’s happened? These are virtues I’ve seldom found in this company, which I first watched in 1982 and last saw when it visited New York in 2012. But the Paris Opera Ballet is under new management: Benjamin Millepied became its artistic director in 2014, and this is the first season in which he has chosen the repertory. It’s fair to hope he’s responsible for these fresh qualities of style.
The Paris Opera, the world’s oldest ballet company, has seldom exhibited the musicality or delicacy shown by the students in its school. Invariably elegant to the eye, the troupe’s dancers have tended to chop up phrases into short subsections, moved as if respectfully uninvolved by the music and to show steps as handsome outlines but without any coursing fullness of physical tone. At Thursday’s first night, however, the opposite proved true.
The program is dedicated to the composer-conductor Pierre Boulez, 90. Its centerpiece is the world premiere of Mr. McGregor’s “Alea Sands” (his third creation for this company), most of which uses a Boulez score. This follows Mr. Wheeldon’s “Polyphonia,” the company’s first experience of this long-in-demand choreographer. (It’s the only item of the evening that demands female pointwork and rigorous academic detail. But that’s not unusual here — the Paris Opera, which has long shown widely eclectic tastes, has never been afraid to venture far from ballet academicism.) During the second intermission, the Palais Garnier’s great stage is carefully strewn with earth and raked before the final work: Ms. Bausch’s “Le Sacre du Printemps,” which the company has danced since 1997. 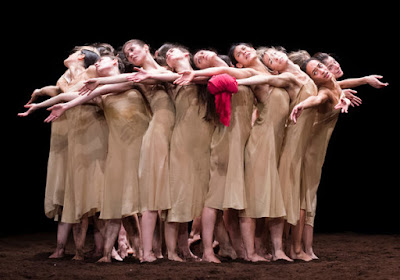 In each, the quality of the dancing led me to adjust upward my opinion of the choreographer: I discovered virtues that other troupes might not have disclosed. Having watched “Polyphonia” (2001, to piano music by György Ligeti) with four other troupes, I thought I’d run out of things to admire in it; but no. The Paris dancers bring pulsatingly to life its difficult rhythms, its beaming geometric lines and its singing momentum. Though Mr. McGregor’s dance style is notoriously full of showy gimmicks (head-juttings, acrobatic extensions), it’s evident from “Alea Sands” that he also prompts dancers to demonstrate new excitement in modest effects. Slow transfers of weight became riveting; sequences of metrical complexity became potent. And the Bausch “Sacre” is vividly alive with dynamic contrasts, shapes fully etched in space, incisive rhythmic vigor.
Certainly “Alea Sands” has its gimmicks. It begins with rhythmic flickerings of the house’s ceiling lights as if the electricity is running out; that simple rhythm (attributed to Haroon Mirza/hrm 199) becomes an electronic musical composition, which accompanies the opening pas de deux.
The score that follows, Mr. Boulez’s “Anthèmes 2” for solo violin (Michel Barenboim) and electronics, is of a far higher order; rhythmic intricacy and sonic originality prove engrossing. Mr. McGregor’s choreography, although it doesn’t catch all that’s going on in this score, creates a serious and sustained dance dialogue with this music. (This is the first time that a McGregor ballet has helped me hear its music better.) Likewise, the seven dancers’ fully committed physicality led me into details of the movement. Above all, Mr. McGregor makes them fully articulate their torsos and keeps that central energy flowing through the limbs — in rippling waves, in sequences of isolations and in fully charged lines. 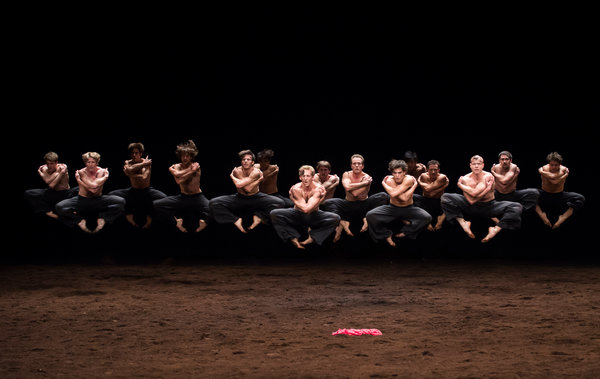 Members of the Paris Opera Ballet performing in “Le Sacre du Printemps.” This is the first season in which the ensemble’s new artistic director, Benjamin Millepied, has chosen the repertory. CreditJulien Benhamou/Paris Opera Ballet
Gareth Pugh has placed the dancers in body tights in which black and pale brown shapes coexist dramatically. Lucy Carter’s lighting was on the dim side; I’d like to know how clear the dance was to those in the most remote seats.
The structural organization keeps “Alea Sands,” danced by three men and four women, suspenseful. Solos, duets, trios and quartets fluently lead into one another or coincide. Men partner either women or other men with cool skill — there’s a lively male trio — and the mood is bravely investigative. Not since the 2006 premiere of “Chroma” (Royal Ballet) has this choreographer looked so impressive.
The Bausch “Sacre” is a big hit with the general audience, as are most choreographic treatments of “Le Sacre,” but it has always divided critical observers. This time it divided me. For some, it’s a repellent exercise in panicky sexist hysteria; for others it’s an important drama. Remarkably, it has won the admiration of four other leading choreographers — Richard Alston, Matthew Bourne, Kenneth MacMillan, Paul Taylor, all very different — and what makes that wholly extraordinary is that three of those have also choreographed their own versions of “Le Sacre.”
This performance showed that, in pure-dance detail, Ms. Bausch’s “Sacre” is her finest and most musical work; and the Parisians, dancing it with passionate firmness as well as fervor, make the most of this. (Ms. Bausch died in 2009; the chief exponents of her work are her own Wuppertal Dance Theater, a company whose movement has intensity but not stylistic rigor.) It was startling to find how often the difficult meters of Stravinsky’s famous score were honored in the movement and how powerfully the Paris dancers revealed Stravinskian force.
Velio Pahn conducted. Although there were brief flaws in several exposed wind-instrument solos, the score was played with marvelous color and vitality. (I was amused to notice several players smiling as they attacked some of the more passionate passages.)
Despite all this, I have strong reservations about all three works. “Alea Sands” sets up dramatic situations it doesn’t develop; “Polyphonia” is an exercise in high style without serious drama; the Bausch “Sacre,” less musical in its response to the larger architecture of Stravinsky’s score, has moments of ludicrous melodrama. Still, the Paris Opera made important cases for all three — and for itself. This was my first view of the company under Mr. Millepied’s direction; it gives me great hope.