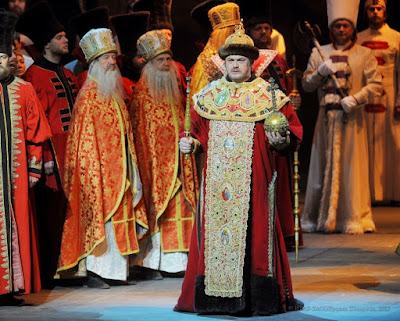 Empress Catherine II issued an imperial edict that "Russian Theatre should be not merely for comedies and tragedies, but also for operas". This decree of 12th June 1783 to the Russian company performing in the specially built Bolshoi (Stone) Theatre envisaged the "production of one or two serious operas and two new comic operas per year". This date is considered the starting point in the history of the Mariinsky Opera Company.
Italian opera held sway over St Petersburg’s Bolshoi Theatre, which opened on 24th September 1783 with Paisiello’s opera Il mondo della luna. Alongside those by foreign composers, Russian works gradually began to appear on the Petersburg stage, including Orpheus and The Coachmen at the Travellers’ Inn by Yevstigney Fomin, The Miller, the Wizard, the Liar and the Matchmaker by Mikhail Sokolovsky and The Carriage Accident by Vasily Pashkevich. These first frays into the world of opera played a great historic role, as this is where elements of the Russian musical and dramatic style were first heard, later to be developed in the works of the great opera composers of the 19th century. Russian opera singers such as Yelizaveta Sandunova, Anton Krutitsky, Vasily Samoylov and Pyotr Zlov dazzled alongside foreign soloists on the Petersburg stage. The emergence of the Russian school is linked to these names. Mikhail Glinka’s opera A Life for the Tsar was premiered at St Petersburg’s Bolshoi Theatre on 27th November 1836; precisely six years later, on 27th November 1842, Glinka’s second opera Ruslan and Lyudmila was performed here for the first time. The first in a series of great Russian operas combining true art with genuine accessibility, they marked the birth of classical Russian opera. It was not by mere chance that A Life for the Tsar opened the Mariinsky Theatre on 2nd October 1860. 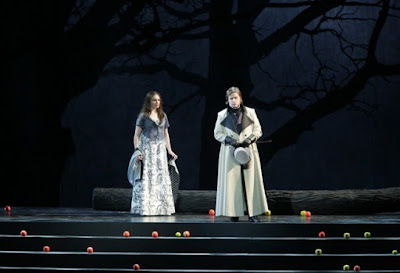 Edward Napravnik, who dedicated over half a century to the Mariinsky Theatre (1863-1916), played an immense role in developing Russian operatic theatre, training singers and establishing a brilliant orchestra. Napravnik built up a great company that could perform complicated concert programmes in addition to operas and ballets.
The operas The Stone Guest by Dargomyzhsky (1872), Judith (1863), Rogneda (1865) and Satan (1871) by Serov, most of Rimsky-Korsakov’s operas, Boris Godunov (1874) and Khovanshchina (1886) by Musorgsky, Prince Igor (1890) by Borodin, The Demon byRubenstein, all of Tchaikovsky’s operas (Charodeika being conducted by the composer himself) and other magnificent Russian operatic works were all premiered at the Mariinsky Theatre.
The theatre’s repertoire also included the best operas by western European composers. Giuseppe Verdi wrote La forza del destino especially for the Mariinsky Theatrein 1862, where it was premiered in the presence of the composer.
The history of Richard Wagner’s operas in Russia is closely linked above all with the Mariinsky Theatre, where Wagner first became known to Russians not only as a composer but also as a conductor. In the 1860’s and 1870’s, the Mariinsky Opera Company introduced the public to the composer’s early reformative works and, at the turn of the century, staged Wagner’s grandiose tetralogy Der Ring des Nibelungen in full.
A great opera company emerged at the Mariinsky Theatre. The talents of Osip Petrov, who first sang the roles of Susanin, Ruslan, Farlaf, the Miller and Ivan the Terrible helped Russian operatic art to blossom. He performed on stage for almost half a century alongside Anna Vorobyova-Petrova, Maria Stepanova and Lev Leonov. These singers were succeeded by a younger generation of singers including Yulia Platonova, Mikhail Sariotti, Fyodor Komissarzhevsky, Ivan Melnikov, Fyodor Stravinsky, Yevgeny Mravin, Maria Slavina and Nikolai and Medea Figner. At the turn of the century, the Russian operatic stage was illuminated by the talents of the great Fyodor Chaliapin, who constantly aimed to embody artistic truth and portray strong human emotions on the stage.
At the start of the 20th century, operas at the Mariinsky Theatre were marked by innovative attempts to stage "unified" productions that combined music, drama, painting and choreography. Artists Alexander Golovin, Konstantin Korovin, Alexander Benois and Valentin Serov, choreographer Mikhail Fokine and director Vsevolod Meierhold collaborated on operatic productions. During his period as director of the Mariinsky Theatre (1909-1918), Meierhold staged several productions including Wagner’s Tristan und Isolde (1909), Gluck’s Orphйe et Eurydice (1911), Musorgsky’s Boris Godunov(1911), Strauss’ Elektra (1913), Dargomyzhsky’s The Stone Guest (1917), Rimsky-Korsakov’s The Snow Maiden (1917) and Stravinsky’s The Nightingale (1918). Meierhold’s operatic reforms brought the art closer to contemporary theatrical trends, seeking out new stylistic techniques connected with conventional theatre aesthetics and stylisation. In the first years after the Revolution, the foremost Russian performers continued to sing at the theatre. An entire galaxy of operatic stars including Chaliapin, Yershov, Piotrovsky, Andreyev, Bosse, Kastorsky and Kobzareva performed on the stage. Soon a new generation of artists appeared; such singers as Maksakova, Reisen, Slivinsky, Migay, Derzhinskaya, Pechovsky and Gorskaya provided a firm foundation for the Opera Company in years to come.
Conducting was at an unusually high level; operas were conducted by Kouts, Malko, Fitelberg, Pokhitonov, Kuper, Dranishnikov and Gauk.
Amongst new operas performed at the Mariinsky Theatre at this time, Prokofiev’s satirical comic opera Love for Three Oranges (1926), Berg’s expressionisticWozzeck (1927) and Strauss’ Salome (1924) and Der Rosenkavalier (1928) were especially interesting. The years leading up to the Second World War saw the production of Gцtterdдmmerung in 1931, Das Rheingold in 1933 and Lohengrin in 1941.
During the war years, part of the company remained in besieged Leningrad and performed concerts and operas for city residents. The rest of the company was evacuated to Perm, where it not only performed operas from the repertoire of past years, but also staged several new productions.
After the war, the theatre staged many important productions, bringing fame to a new generation of singers, musicians and directors. Prokofiev’s The Duenna (Betrothal in a Monastery), one of the most vivid comic operas, was among those to enjoy such success when it was staged in 1946. 1960 saw the premiere ofSemyon Kotko (directed by Tovstonogov). Amongst the greatest singers then at the theatre were Preobrazhenskaya, Serval, Kashevarova, Velter, Mshanskaya, Barinova, Krivulia and Laptev.
Of western European operas, the revival of Wagner’s Lohengrin (1962) and Verdi’s La forza del destino (1963) deserve special attention. Later came Benjamin Britten’s contemporary opera Peter Grimes (1965) and Hungarian composer Ferenc Erkel’s Lбslу Hunyadi (1965). 1966 saw the production of Mozart’s The Magic Flute, an opera rarely staged in Russia. Productions of these years helped discover the unique talents and great gifts of singers such as Irina Bogacheva, Galina Kovaleva, Lyudmila Filatova, Boris Shtokolov and Vladimir Atlantov. 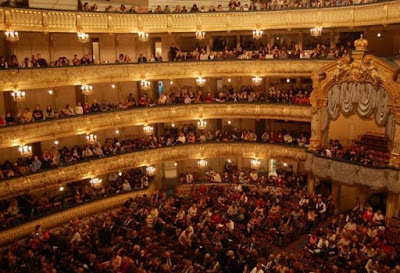 Yuri Temirkanov was the theatre’s Principal Conductor from 1976 to 1988. Starting with contemporary operatic music (Prokofiev’s War and Peace (1977) and Rodion Shedrin’s Dead Souls, staged by Boris Pokrovsky (1978)), he turned his attentions to Russian classics not merely as a conductor but also as a stage director, writing his own scene plans for Eugene Onegin and The Queen of Spades. During this period, such great singers as Yevgeniya Gorokhovskaya, Lyubov Kazarnovskaya, Larisa Shevchenko, Konstantin Pluzhnikov, Nikolai Okhotnikov, Sergei Leiferkus, Alexei Steblyanko and Yuri Marusin occupied the forefront of the operatic stage.
Valery Gergiev’s appointment as Principal Conductor and later Artistic Director at the end of the 1980’s heralded a new era for the Opera Company. The first years of his leadership were devoted to reforms not only to repertoire policy, but most importantly to the development of a new working style in a new, faster artistic tempo. On Gergiev’s initiative, the theatre held "monographic" festivals dedicated to Musorgsky, Prokofiev and Rimsky-Korsakov, the greatest Russian composers. At the Musorgsky festival in 1989, all the composer’s operas were performed - Boris Godunov, Khovanshchina, a concert performance of The Sorochinsky Fair, The Marriageand highlights of Salammbo as originally orchestrated by the composer. The festival dedicated to the 100th anniversary since the birth of Prokofiev presented audiences with four of his operas - The Fiery Angel, War and Peace, Love for Three Oranges and The Gambler. The Fiery Angel, one of the festival premieres, staged by British director David Freeman, was named best production of 1992 in Japan. Prokofiev’s operas were not staged at the Mariinsky Theatre for a lengthy period, and the theatre paid tribute and respect to the most important Russian opera composer of the 20th century with this festival and further productions of Betrothal in a Monastery (1996), Semyon Kotko (1999) and War and Peace (2000). The Rimsky-Korsakov in the 20th Century festival staged the composer’s monumental operatic works - The Maid of Pskov, The Legend of the Invisible City of Kitezh and the Maid Fevroniathe epic opera Sadko, Autumn Song, Kashchei the Immortal and a concert performance of The Tsar’s Bride.
The tradition of Promenade concerts accessible to all was restored in the 1991-92 season, their rich and varied programmes intending to draw the widest possible audience. The theatre’s symphonic concerts are now firmly established. The Mariinsky Opera Company and Symphony Orchestra perform at international festivals including those in Baden-Baden, Salzburg, Rotterdam, Rome and Mikkeli.
The success of the Opera Company is ensured by its highly talented singers who are able to enrich any production, either classical or contemporary. It is no mere chance that Mariinsky Opera singers perform on the stages of the world’s leading opera houses, demonstrating the high level of the Russian operatic school. Alongside respected singers such as Bogacheva, Borodina, Gorokhovskaya, Dyadkova, Gorchakova, Shevchenko, Novikova, Galuzin, Gergalov, Marusin, Pluzhnikov, Putilin, Vaneyev and Okhotnikov, there is a now a new generation of young talented performers including Anna Netrebko, Irina Dzhoieva, Yevgeny Nikitin, Olga Trifonova, Vasily Gerello, Ildar Abdrazakov, Daniil Shtoda and Irina Mataeva.