By Daniel Kreps
Singer, in phone call to wife before suicide, slurred his words, admitted to taking too much anxiety medicine and repeated "I am just tired"
A police report from the investigation into the death of Chris Cornell has revealed new details regarding the singer's suicide. 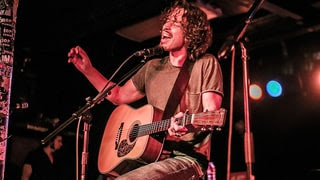 According to the report, obtained by the Detroit News, Cornell had a troubling telephone conversation with his wife Vicky in the hour before his death where he admitted to taking "an extra Ativan or two" and was slurring his words, reiterating Vicky Cornell's separate statement Friday morning.
The police report also fleshed out the timeline of what transpired from the time Soundgarden's Detroit concert ended to the time the singer was found dead in his hotel room's bathroom.
Soon after Soundgarden's concert ended, at 11:30 p.m., Cornell's bodyguard Martin Kirsten said he accompanied the singer to his hotel room to help fix his computer and give him two Ativan "which victim takes for anxiety," the police report states.
Soon after, Cornell and Vicky spoke on the phone, with the singer slurring his words, admitting he may have taken too much Ativan and repeatedly saying "I am just tired" before abruptly hanging up.
Following that conversation, Vicky Cornell called Kirsten to check on her husband. Despite having the key to Cornell's room, Kirsten couldn't open the door because it was latched. Kirsten then called hotel security, who told the bodyguard that they could not let him in the room because he wasn't authorized to enter it.
Despite security's refusal to assist, Kirsten then kicked open Cornell's hotel door. The bedroom door was also latched, so the bodyguard again called hotel security before ultimately kicking open that door. Upon inspecting the bathroom, Kirsten found Cornell "laying on the bathroom floor" with blood running down his mouth and a red exercise band around his neck.
According to TMZ, Cornell fastened the band to a carabiner that had been lodged into the doorframe, leaving indentation marks.
Just before 1 a.m., paramedics entered Cornell's room, removed the band from his neck and attempted CPR on the singer, who was not breathing. A doctor who later came to the scene pronounced Cornell dead at 1:30 a.m.
Chris Cornell's wife Vicky issued a statement speculating whether his suicide was the result of too much anxiety medication. Watch here.