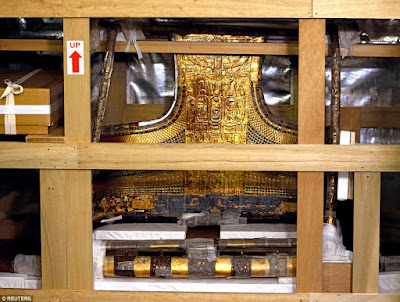 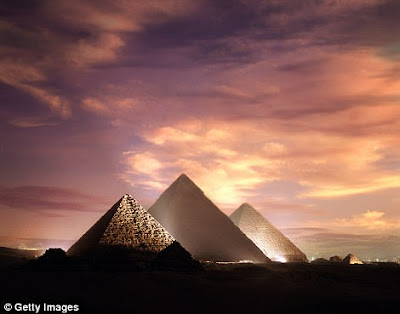 The new museum, just west of the Giza pyramids (pictured) will extend over 47 hectares (116 acres) and contain some 24,000 square metres (258,300 square feet) of permanent exhibition space
In one of the galleries of the new complex, technicians wearing white gloves gingerly unwrapped the precious objects.
Relocating the two pieces forms part of a joint programme with the Japan International Cooperation Agency (JICA) to restore, pack and transport 71 items from the existing museum to the new facility, an antiquities ministry statement said.
'During the next weeks and months we're going to transfer regularly more than 1,000 remaining objects in Cairo museum to be restored and prepared for the exhibition here in the first half of 2018,' said Antiquities Minister Khaled al-Enany.
'Today is a big event... today we start transferring big objects,' he said.
The Grand Egyptian Museum had been scheduled to open in 2015, but construction has lagged as expenses mounted to more than $1 billion.
The museum is now scheduled to open partially in 2018.
Eventually, the vast complex will house more than 100,000 relics including the 4,500 pieces of Tutankhamun's treasure discovered in the southern Valley of the Kings in Luxor.