By MICHAEL COOPER
The standing ovation shook the Metropolitan Opera on Saturday afternoon, with confetti made from ripped-up programs cascading down from the theater’s highest balcony as a bouquet of pink roses was tossed to the stage. Renée Fleming, the star soprano, had just bid farewell to one of her signature roles — the Marschallin in Richard Strauss’s “Der Rosenkavalier” — closing an important chapter in a storied career that has taken her from opera to far wider fame.
Her final performance as the Marschallin — which was beamed live to cinemas around the world as part of the Met’s popular Live in HD series — came at a moment of transition for Ms. Fleming, 58. In recent years she has been steadily retiring the big prima donna roles and singing more recitals, appearing on Broadway and taking positions behind the scenes, including as a creative consultant at the Lyric Opera of Chicago. Next season she plans to appear as Nettie Fowler in a Broadway production of “Carousel.” 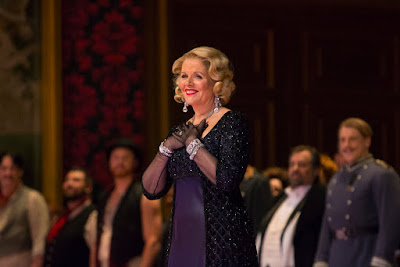 Ms. Fleming says she has no intention of quitting the opera stage altogether: She has expressed an interest in appearing in new operas, and there have been suggestions that she might appear in cameo roles. But her final Met performance as the Marschallin — a married noblewoman with a 17-year-old lover who is learning to come to grips with the passage of time, and at one point sings of rising in the night to stop the clocks — took on special resonance.
“It’s been a privilege to sing the most interesting, complex soprano character in opera,” Ms. Fleming said in an email after the performance. “I’m thrilled to be leaving her on a high note with this phenomenal cast and gorgeous, smart new production. Singers change repertoire all the time, but this role has been so meaningful for me, I wouldn’t mind stopping the clocks for a moment or two today.”

Even people who have never set foot in an opera house have come to know Ms. Fleming: She sang the national anthem at the Super Bowl in 2014, sang in Elvish in a “Lord of the Rings” film, delivered a Top 10 list for David Letterman, sold more than two million recordings and won four Grammy Awards. Opera fans cherished her in many roles, including the Countess in Mozart’s “Le Nozze di Figaro,” Desdemona in Verdi’s “Otello,” and the title role in Dvorak’s “Rusalka.”

She bid adieu to some of her colleagues at the Met earlier in the week, thanking them for their support during her 26 years of singing there. “Fine conductors always say that the best orchestra is an opera orchestra, not only for the consummate skill and mastery of so many styles, but also because of the extraordinary flexibility required,” she wrote to the Met’s orchestra. “You represent the pinnacle!”

In another letter she thanked and praised the Met’s chorus for its vocal artistry and hard work. “I wonder at the ease with which you dispatch multiple languages and styles while rehearsing staging and movement for different directors at the same time,” she wrote.

In both messages, she said: “I may return to the Met.”

“Der Rosenkavalier” ends with the Marschallin nobly stepping aside to let her handsome young lover go off with the young woman with whom he has fallen in love. In the Met’s new production, directed by Robert Carsen, Ms. Fleming exits the stage on the arm of a police commissioner, with the vague suggestion that while one affair may be ending, another may be beginning.