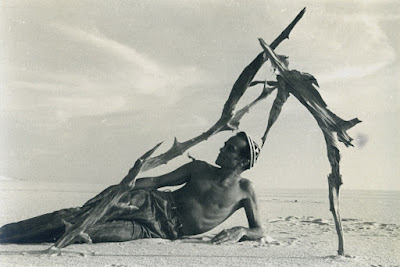 Painters Paul Cadmus and husband-and-wife Jared French and Margaret Hoenig French comprised PaJaMa, named for the first two letters of each of its founders’ names. The trio’s lifestyle and intimate photographs were daring for their day. Their sexual politics were permissive and fluid—Jared and Cadmus were lovers—and their frames reflect a sense of freedom that contemporary art viewers hardly associate with their era. PaJaMa’s pictures are important documents in the histories of art and photography, and their playful, queer aesthetic still resonates in 2019.
PaJaMa’s oeuvre occupies a strange place in the chronology of 20th-century art. The 1913 Armory Show in New York brought European avant-garde art to the United States, gradually turning American artists away from the Realist scenes they’d previously embraced. Surrealism hit first, then non-representational art. In the 1930s and into the early ’40s, as the Great Depression raged, many American artists turned to the government’s Works Progress Administration for jobs. They collaborated on murals and illustrated textbooks, forming artistic communities that eventually became codified groups like the Abstract Expressionists. 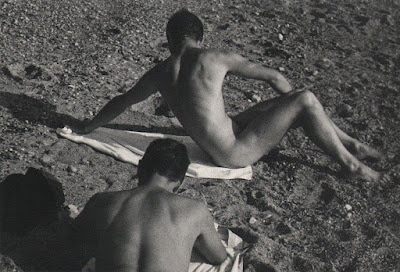 In their painting practices, however, Cadmus and the Frenches demonstrated continued interest in the body and sexuality, despite the trend toward abstraction. In pictures of soldiers and sailors, Cadmus alluded to homosexual pick-ups and illicit sexual activity. His famously scandalous 1934 painting The Fleet’s In!, for example, depicts drunken naval officers on leave. One seductively offers a cigarette to a man with a red tie—at the time, a covert signifier of being gay. Jared, for his part, designed campy ballet costumes, and Margaret once painted nude men outside a beach house.
In the summer, the trio brought this sense of liberty to the shore. And these artists summered. Many photographs from the PaJaMa oeuvre document jaunts to Fire Island, Nantucket, Provincetown, Saltaire, and Truro. They captured fellow artist George Tooker vamping nude on the beach, holding a cow skull–shaped piece of wood over his crotch. In another photo, men in tiny swimsuits eye one another at the ocean’s edge. Publisher Monroe Wheeler appears in one shot regally reclining, shirtless, on the sand beneath a piece of salvaged wood. These pictures revel in their young, attractive subjects’ muscular physiques. Each figure becomes a carefree character in a larger story of pleasure that altogether seems classical rather than modern.
PaJaMa’s photographs simultaneously glorify and demystify their creative subjects, depicting them in all their beauty and youth. Even when they’re naked, the figures are more self-possessed than vulnerable. Body shame and inhibitions have no part. This uninhibited attitude wasn’t limited to the collective: One friend, Chuck Howard, had a nude film career beyond PaJaMa’s frames. He participated in Dr. Alfred Kinsey’s famous studies, performing sexual acts with poet Glenway Wescott—another PaJaMa model—in front of the researchers’ camera.
This sense of erotic play and theatricality persisted when PaJaMa went indoors. It’s easy to imagine the group putting on plays, or giving dramatic readings as they entertained themselves in New York and on vacation. Margaret French, Paul Cadmus, Provincetown (ca. 1945) features the titular pair by a spotlit white curtain. Margaret stands behind it, holding a leafy branch, her shadowy figure soft at the edges. Cadmus appears to be draped in the curtain itself, his features even darker and more mysterious than hers.
Indeed, back in the city, the trio was immersed in the world of the New York cultural elite.They were a part of the major philanthropist Lincoln Kirstein’s permissive, progressive circle, and they rubbed shoulders with (and photographed naked) the era’s greatest cultural minds. Their 1943 photograph of Tennessee Williams shows the lauded playwright facing away from the viewer as he reclines nude on a bed.
It’s easy to forget, while looking at these joyful pictures, that they were made during and just after a major world war. Sometimes, however, a moody sobriety did infiltrate the work. Margaret French, George Tooker and Jared French, Nantucket (ca. 1946), for example, features Margaret lying in a white garment at the top of a staircase that leads down to the ocean. One man sits on the stairs, while the other looks off toward the distance. The composition conveys disconnect—three characters in their own worlds in the face of the gray expanse of sky and sea.
Their bohemian attitudes, no doubt,helped protect the sexually liberated trio and their friends from significant danger and societal judgment. Around the country, doctors were still lobotomizing homosexual patients in hopes of turning them straight. Homosexuality itself was criminalized. Yet the PaJaMa trio hardly squandered their privilege. Their photographs capture a safe space of their own making: a tight-knit community of creative personalities in a place where they could be fully themselves—or invent new selves altogether.