THE LOUVRE COMMISSIONED PERFUMES BASED ON SOME OF ITS MOST ICONIC MASTERPIECES.

The Venus de Milo at the Louvre. Photo by Jorge Royan, via Wikimedia Commons. 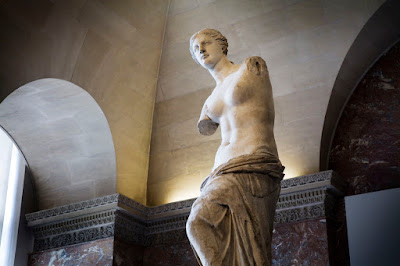 The Louvre is adding another sensorial dimension to some of its treasures—the museum hired two of France’s top perfumers to create scents based on selected works from its collection.

The museum chose Ramdane Touhami and Victoire de Taillac, who co-founded the French perfume company Officine Universelle Buly, to take on the task. They in turn hired eight perfumers, giving each one a highly specialized task. Touhami told AFP:

It is about adding an olfactory dimension to a visual experience. I chose eight parfumeurs, all stars and gave them 100-percent freedom, with no limit on their budgets.
One scent specialist brought on for the job, Daniela Andreier, said of the decision to work with Ingres’s La Baigneuse:

With her tender and milky skin, the water running, the linen on which she sits [. . .] I immediately thought of orange blossom, neroli, lavender, a rather modest accord evoking the sheets that have dried in the sun. [. . .] I see perfumers as translators, capable of transforming a color, light or texture into a note. Thus the green velvet curtain, on the left, evoked to me the absolute of lavender, rich and dark.
The scents will be on sale at a store near the Louvre from July 3rd through January 2020.

Further Reading: The Scent Designers Trying to Capture the Smell of the New Museum
Wallace Ludel