LOOKING AT MONET AS THE PLANET BURNS

At Giverny, by rendering landscapes of his own creation, Monet was not so much replicating nature as, in a sense, collaborating with it. 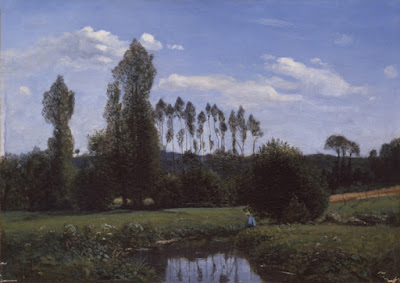 DENVER — Art has occupied itself with what we now call ecology since at least the onset of industrialization, when movements like the Hudson River School in the United States and Romanticism across the Atlantic mythologized the natural landscape as it was being actively destroyed by urban capitalism’s brisk upscaling.

These idealized depictions resurrected an image of purity that was already lost. Just as the concept of the sublime emerged in response to an awe-inducing natural world, its inverse, our chokehold on the environment, also began to solidify, forming the foundations of the planetary-scale confrontation we face at present. 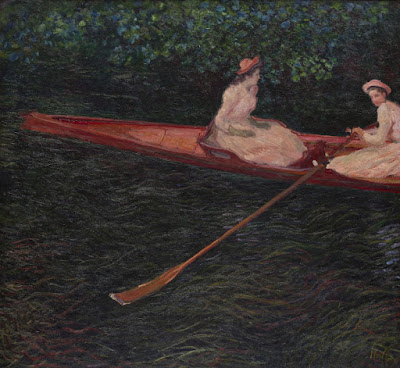 The paradox of 19th-century landscape painting clouded what might otherwise have been a pleasant stroll through Claude Monet: The Truth of Nature at the Denver Art Museum. Though Monet’s work is not typically associated with the legacy of Romantic landscape painting, the curatorial focus of this career-spanning show, a sprawling chronology across more than 100 works, seemed determined to situate his trajectory there.
In an early gallery, labeled “Pure Landscapes,” a bit of wall text — a rarity in this exhibition, which leans heavily on personal audio guides — describes Monet’s 1878 pilgrimage from Argenteuil to Vétheuil, which he undertook to find the kind of rural isolation that began to elude him as Argenteuil grew and industrialized.

The artist’s voluntary exile in search of untouched climes — the Romantic quest for seclusion-as-purity — becomes a through line in the first half of the exhibition. A quote from the artist splashed across the wall of one inner gallery offers a familiar salute: “The richness I achieve comes from NATURE, the source of my INSPIRATION.”

The richness of nature is indeed present across Monet’s oeuvre, and makes for a lush and absorbing show. Few paintings are peopled, with exceptions like “Boulevard des Capucines” (1873-74) and “The Canoe on the Epte” (1890) casting the emptiness of other works in sharp relief. An early “View from Rouelles” (1858) testifies to the young Monet’s mastery of verisimilitude — a fixation on realistic rendering that he disengaged as he developed the style for which he would become famous; a turn towards loose brushstrokes unfolds as the exhibition progresses toward Impressionism proper.
Monet’s experiments with series of the same subject, such as the “Grainstacks” of 1891 betray a fixation on ephemerality, a concession that that nature is fleeting, insecure, and delicate; the urgency of capturing its momentary beauty is embodied in rough dabs of frenzied brushwork. If contemporary climate anxiety is rooted in a gnawing sense of the habitable earth’s impermanence, might these paintings — concerned with capturing the elusiveness of natural beauty — be viewed as gentle prognosticators?

The show’s final gallery houses a selection of Monet’s best-known late works, including The Water-Lily Pond (1918), in which the hunt for a mythological, untouched nature comes to an end. Unlike the works from Varengeville, Bordighera, and Vétheuil, which follow the artist’s ongoing pursuit of locales unpolluted by human habitation, the early-20th century works set in Giverny depict a garden that Monet cultivated himself. Is “nature,” then, synonymous with “truth,” as the exhibition’s title implies? By rendering landscapes of his own creation, the artist was not so much replicating nature as, in a sense, collaborating with it.

There’s a radical proposition here: Given our contemporary climate crisis, the fiction of Nature as Ultimate Truth is both appealing and deleterious. As feminist science scholars like Karen Barad have written, the relationship of nature and culture is not one of reflection or mimesis but one of entanglement. As rising tides threaten to destroy art-scene locales from Miami Basel to the Venice Biennale, it is clear that even the most privileged of spaces aren’t immune to its impacts. The question of art’s relationship with ecology has resurfaced, taken up by contemporary artists from Mel Chin to Olafur Eliasson.
But what should works in this vein strive for? Consciousness-raising is becoming the implicitly accepted role of well-meaning contemporary art, commenting on the tragedy of our deteriorating environment to an audience already in agreement. In better moments, art can give form and weight to the structural drivers of catastrophe that are typically so large as to be inconceivable — lending affective power to the inconvenient truths we’d rather not visualize.

The presumed distance between humanity and the natural world that occurred around the time that Monet began his career is a construction of precisely the same systems that drive our present ecological disaster; to borrow crudely from Bruno Latour, we can speak about “modern art” but we ourselves have never been “modern.”

The mythology of Romanticism, with its sentimental pursuit of untouched nature, emblematizes dated post-Enlightenment ways of thinking, which attempt to cleave hard (even if beautiful) lines between humans and the ecologies within which they’re embedded. But with a little critical re-framing, Monet’s most celebrated works can testify to the perniciousness at the heart of the structural conditions underlying today’s climate crisis — in particular, the dated binary between “enlightened” humans and an inert and exploitable “true” nature — the bankrupt human-centrism that gave rise to it all.