Rows of shrunken, faceless prisoners line up before oversized guards with guns. Light-posts loom above the barbed wire fence like enormous yellow eyes, and two swastika-marked chimneys pour smoke from a crematorium. But there’s hope: Just outside, flowers bloom and pine trees blow in the breeze. Spring is coming.

The horrific scene could be taken from Auschwitz, Ravensbrück, or Bergen-Belsen; the artist Ceija Stojka had been imprisoned at all three of these concentration camps by the time she was 12 years old. Although Stojka survived the war, 90% of her fellow Austrian Romanis and Sintis (commonly, and often derogatorily, known as gypsies) did not. This painting, Ohne Titel (Untitled) (2003), is a rare, wrenching account of a Romani’s experience of the Holocaust, told nearly 60 years later.

“Ceija Stojka. This Has Happened” at Madrid’s Museo Nacional Centro de Arte Reina Sofía features 140 paintings and drawings, plus photographs, videos, books, and other documentary materials by and about the artist. Stojka’s first monographic exhibition in Spain appears as the country’s extreme right-wing Vox party makes enormous political gains inside the country, becoming the third most powerful group in parliament when Stojka’s exhibition opened in November. But it’s not just Spain; nationalism and an intolerance of the other is spreading across Europe and other parts of the world. And so Stojka’s poignant life story, artworks, and message are especially urgent warnings in our times.

Romanis arrived in Europe in the 12th century and quickly started to suffer discrimination. In the years leading up to World War II, their status drastically declined as the global economic crisis made jobs and social aid scarce, and eugenics became a widely accepted justification for excluding certain groups from such social benefits. Stojka’s family lived as nomadic horse traders before the war, and traveled the Austrian countryside around Lake Neusiedl when she was a child. The idyllic setting eventually inspired her art. But as tensions heightened, Stojka’s father converted their caravan into a cabin on the outskirts of Vienna in an effort to blend in. Austria’s far-right National Socialist Party accused Romanis of being a drain on society and, in 1938, began deporting thousands of working-age Romanis to labor camps throughout the country. Stojka’s father was sent to Dachau in one of these raids and died in imprisonment the following year.

Stojka was only 10 years old when she was arrested, imprisoned, and deported to Auschwitz. In the years when most children are finishing elementary and starting middle school, Stojka was subjected to unthinkable suffering and cruelty at the camps. In paintings she made later to reflect on this period, Stojka rendered huge SS boots, floating eyes, and ravenous dogs.Her paintings’ rainbow colors, schematic figures, and restless gestures reflect Stojka’s profound preteen trauma. “She chooses to paint and draw from a child’s perspective to flee the hell of the adult world, of unlimited cruelty,” explained French art critic Philippe Cyroulnik. British soldiers liberated Bergen-Belsen in April 1945. It took Stojka and her mother (who was with the artist throughout her time in the camps) four months to return to Austria, crossing Germany and the Czech Republic on foot.

It’s estimated that between 200,000 and 500,000 Roma people—approximately a quarter of Europe’s Romani and Sinti population—were killed during World War II. Countless others were imprisoned, tortured, and sterilized. Yet relatively little is known about the Porajmos, or Romani Holocaust, and documentation is scarce. Long after the war ended, it still wasn’t safe to openly identify as a Romani or Sinti in Austria. Many survivors relocated to big cities like Vienna, Graz, and Linz, and some even changed their names to avoid further persecution. Stojka initially returned to nomadic horse trading, but later settled in Vienna. She had three children, sold fabrics door to door and then carpets at a market; she dyed her hair blonde and tried to resume her life without drawing too much attention to herself.
Pre-war racial laws in Austria banned Romani and Sinti children from attending school, meaning that many survivors, including Stojka, could not read or write. She remained silent about her traumatic experiences for years. But in 1986, Stojka met the filmmaker and writer Karin Berger, who helped her publish Wir leben im Verborgenen. Erinnerungen einer Rom-Zigeunerin (We Live in Seclusion. The Memories of a Romani) (1988), the first of four memoirs, about her experience in the camps. Soon after, Stojka began to create her autobiographical drawings and paintings.

At the time, Austria was facing a surge in nationalist sentiment, and the artist was fearful that the past would repeat itself. “I didn’t have anyone who would listen to me,” Stojka said in a 2008 interview, “and paper is patient.” Stojka’s work with paper—both as a writer and artist—inspired the creation of the first Austrian Romani Association in 1989. By the time of her death in 2013, she had become one of Europe’s most prominent figures for the Romani cause. Budapest’s European Roma Cultural Foundation called her “a key figure for the history, art, and literature of Romani culture in Europe.” 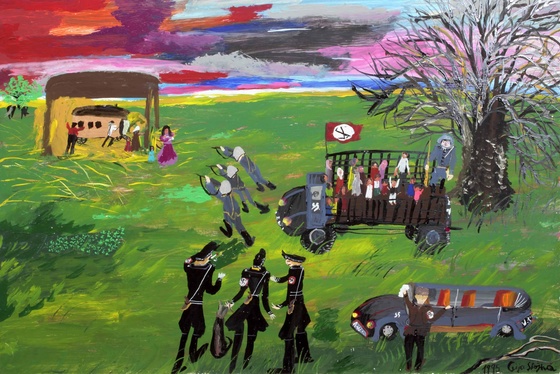 Stojka’s legacy lives on in the powerful histories and experiences embedded in her work. In her painting Wo sind unsere Rom? Laarberg 1938 (Where are our gypsies? Laaerberg 1938) (1995), armed Nazis surround a Romani settlement—mostly made up of women and children—on the outskirts of a city. The apartment buildings in the distance suggest the many Austrians who were complicit in or complacent about the Nazis’ persecution. In another painting, Ohne Titel / Wein - Auschwitz (Untitled / Vienna - Auschwitz) (undated), a swastika-emblazoned train barrels down a track that twists up into a churning, blood-red sky. Stojka painted many of these painful arrest and deportation scenes. Her fixation with the starting point of her group’s torment reflects the mixture of personal and collective grievance in her work: She spoke for those who could no longer speak.

Art historians and art critics have connected Stojka’s style to the fitful, forceful German Expressionism. Others see traces of Edvard Munch or James Ensor in her raw, haunting imagery. But Stojka was entirely self-taught, and she worked in a style that was all her own. She used her hands, fingers, toothpicks, and brushes to apply acrylic and gouache paint to paper, cardboard, and, more infrequently, canvas. As a mark maker, Stojka alternated between fine detail and brutal force: Light, feathery strokes formed tree branches or footprints, while her rapid gashes became shadows and swastikas. In some works, the artist lent a dreamy, gritty quality to her recollections by mixing sand and glitter into the paint. But her most nightmarish visions are reserved to bleak black and white.

“I reached for the pen because I had to open myself, to scream,” Stojka said in 2004. Many of her paintings and drawings are accompanied by poetic, handwritten captions or inscriptions that transmit the anguish, hope, and ambivalence of recalling these disquieting events.In Stojka’s SS (1995), naked women and children burn in a hellish inferno of charred corpses, as a uniformed figure with a massive black boot marked “SS” looks on. On the back of the painting, the artist wrote the following: “It’s really hard for me to describe this. Forgive me, Ceija. Truthfully.” More than 50 years after her ordeal, Stojka struggled not to remember the horror she suffered in the Holocaust, but to describe it.

Stojka is not the only artist of the Holocast. Charlotte Salomon, Felix Nussbaum, and Gela Seksztajn painted their experiences in hiding, at camps, and in ghettos before they were killed. While these artists captured their experiences as they occurred, Stojka joins David Olère, Boris Taslitzky, and Léon Delarbre, artists who depicted the death camps that they managed to survive. But unlike the others, who were formally trained, and often professionally employed artists, Stojka was self-taught. She revived her memories decades after her trauma, and arrived at her art on her own unique terms. She offers a glimpse into the often-overlooked experiences of the Romanis and Sintis, who were not officially recognized as Holocaust victims until 1961 in Austria, 1982 in Germany, and 2016 in France.
Stojka’s paintings and drawings are harrowing, moving, and beautiful testaments to human creativity in the wake of hate. Stojka once said, “I’m afraid that Europe is forgetting its past and that Auschwitz is only sleeping.” Today, as nationalistic politics surge across the world, Stojka’s art and activism feel especially urgent.