Handel’s first hit was an irreverent comedy about the scheming mother of the Roman emperor Nero, offering a scene-stealing role for a fierce mezzo-soprano as well as several of Baroque opera’s most pyrotechnic musical displays. This season, the Met presents Agrippina for the first time, in a pointed production by Sir David McVicar that transports the action to the present day and amplifies its satirical relevance. Joyce DiDonato spits fire as the power-hungry title empress, and Baroque expert Harry Bicket conducts. By Joel Rozen

Best known today for his oratorios and masterful contributions to the opera seria tradition, Handel was, in his lifetime, also renowned as a comedian. His irreverent treatment of social and cultural themes in his operas included numerous lighthearted interludes and comic situations, as well as characters who could be every bit as slapstick and clownish as they were grand.

Agrippina, a satirical take on ancient Rome that gave the 25-year-old composer his first operatic triumph, is a perfect example of his comic skill. On February 6, Handel’s early masterpiece has its Met premiere in a razor-sharp, updated retelling by Sir David McVicar that shifts the focus to the present day. Mezzo-soprano Joyce DiDonato, celebrated for her tour-de-force turns as Baroque heroines, stars in her first Handel opera at the Met, leading a cast of power-hungry imperial anti-heroes, cartoonishly inept statesmen, and one sex-starved emperor in the composer’s wicked farce. Harry Bicket, an acclaimed Handel conductor who has led previous Met productions of Rodelinda and Giulio Cesare, is on the podium.

In McVicar’s staging, togas and sandals are traded in for leather jackets and spike heels; political subterfuge takes place in private boudoirs and smoke-filled lounges; and set pieces splashed with imperial-era graffiti orbit a lone, gilded staircase leading to an empty throne. The director, whose production of Giulio Cesare for the Met in 2013 cemented his reputation as a first-rate interpreter of Handel, describes all of these visual updates as vital to the opera’s impact. “Because the story of Agrippina is such a universal one, I didn’t want to leave it in ancient Rome,” he explains. “I wanted to make it far more immediate to the audience because the topics it deals with are never going to leave us. People have been behaving badly in positions of power since time immemorial and still are now. So I wanted the world to be one that the audience would recognize.”
That world’s flawed center of gravity is the conniving first-century wife of Claudius, emperor of Rome. When the opera opens, Agrippina is informed that her husband has perished at sea, and she resolves to help Nero, her son from a previous marriage, take the throne. These plans are soon foiled by news that Claudius has been saved by the gallant military commander Otho, whom he has promised to make his successor. Observing that Otho appears more interested in the young socialite Poppea than in politics, Agrippina hatches a plan, telling Poppea that her lover intends to hand her over to Claudius in return for the throne. Pitting all of her rivals against one another, Agrippina believes, will free up the throne for her son. The rest of the drama unfolds with sly humor, tracking the numerous ploys that the royals and courtesans cook up to undermine and manipulate each other. “It is an adult piece. It is an intelligent piece. It is a scathing piece. It is very funny,” says McVicar. “And it tells a universal story, which is that people in high office very often behave very, very badly indeed to get there.”

Just as Agrippina’s story and political symbolism speak to our contemporary world, the tale of the ancient empress also resonated in the composer’s own time. Handel’s librettist for the project, poet Vincenzo Grimani, found the ancient empress especially appealing. The son of Venetian nobles (who owned the very San Giovanni Grisostomo theater where Agrippina premiered), Grimani was also a Habsburg loyalist who had been made cardinal by Pope Innocent XII. His contempt for Pope Innocent’s successor was an open secret in Venice. In Agrippina, he crafted a wry history, one rooted in fact and snatched from the works of Tacitus and Suetonius, but which used ancient Rome as a vehicle for lampooning the new church authorities.

Handel then took Grimani’s libretto and compounded its brilliance with his music. The inventive score, packed with arias of delicious duplicity alongside moments of sublime lyricism, somehow captures both the comedy and the underlying tragedy of political artifice. “Although the situations are for the most part richly humorous, and the tone of the dialogue light and bantering, the arias express genuine feeling,” write Handel scholars Winton Dean and John Merrill Knapp. “Handel does not laugh at his characters; he feels with them. They are human beings with a capacity for suffering that removes them from the shriveled world of caricature.”

To pay tribute to the opera’s original setting yet also give it immediacy and clear relevance, McVicar teamed with set and costume designer John Macfarlane, lighting designer Paule Constable, and choreographer Andrew George. Hoping to create what he calls “a kind of distorted mirror image held up to our contemporary Western society,” the director envisioned a continuity between ancient world and modern, a setting in which characters in suits mingle freely with Roman marble, even springing to life from tombs at the top of the first act.

Agrippina’s main personalities are also brought up to date. Eschewing the temptation to paint everyone as a simple buffoon, temptress, or harridan, McVicar instead focuses on the work’s more pointed satire: the conniving of those close to the throne and the hubris of politicians who entreat others to follow them, even as they are racked with self-doubt. 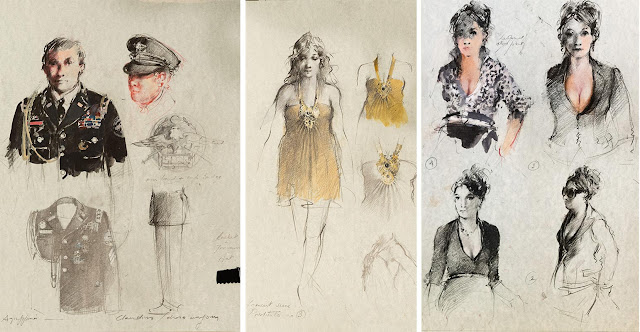 In this retelling, Poppea, portrayed by soprano Brenda Rae in her highly anticipated company debut, is a cocktail-dress party girl not unlike any number of today’s Instagram influencers. Nero, sung with doltish swagger by mezzo-soprano Kate Lindsey, is a mutton-headed hipster. And as Claudius and Otho, bass Matthew Rose and countertenor Iestyn Davies are a pair of reluctant rulers who vastly prefer women to governance.
Ultimately, though, all of these characters revolve around Agrippina. “Nothing will stop this woman until she gets what she wants,” explains McVicar. “Her ambition is overwhelming, but her ambition is also her downfall. Handel never lets us forget that once these powerful people have attained what it is they think they most desire, very often it falls to dust in their hands.”

DiDonato, a charismatic star known for her compelling acting—who has headlined past new Met stagings of Rossini’s La Donna del Lago, Massenet’s Cendrillon, and Donizetti’s Maria Stuarda—has only recently added Agrippina to her repertoire, but has found much to sink her teeth into. “She’s a little wicked. She’s impatient. She might have a drinking problem. But she’ll sort it out and come through,” the mezzo-soprano says. “What we have is one of Handel’s most creative, most clever black comedies. And I think it’s going to surprise everybody who comes to see it.”
Having sung and recorded a considerable amount of Handel’s music, DiDonato admires the 18th-century composer’s unwavering commitment to sending up political deceit—a commitment as essential today as it was then. “Politicians haven’t changed, and politics haven’t changed,” she says. “And the greed and hunger for power at any cost is still with us in 2020.”