6 GREEK MYTHS YOU SHOULD KNOW TO UNDERSTAND ART HISTORY 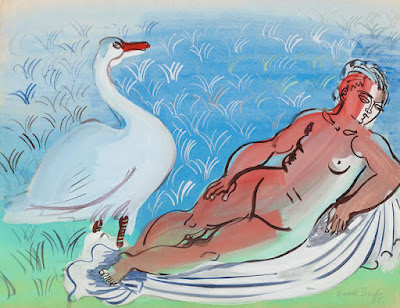 Greek myths have captivated the imaginations of artists since ancient sculptors created gods and goddesses out of marble. The trials of ancient Greek heroes and monsters have served as inspiration for Renaissance masters, Surrealists, and conceptual artists alike. Although no unified telling of Greek mythology exists, sources like Homer’s Iliad and Ovid’s Metamorphoses provide an alternate history of humanity, from the creation of the first woman to the downfall of Troy. Below, we detail six myths essential to understanding the Greek mythology that has been woven into art history.

Pandora, the first woman on Earth, was created in an act of vengeance. Zeus, the king of the sky and the gods, was angry with the Titan Prometheus for creating man in the image of the gods and providing them with fire that he stole from heaven. Zeus ordered the god Hephaestus to create Pandora to exact revenge on Prometheus. Pandora was placed into an idyllic version of Earth, and Zeus gave her a box that he told her never to open. Pandora couldn’t resist the temptation and opened the box, releasing a score of plagues into the world, like disease, old age, and death.
French painter Odilon Redon was fascinated by women from classical mythology, and he painted Pandora several times. In a painting from ca. 1914, Pandora appears nude and surrounded by scores of bright flowers, yet she is intently focused on the small box in her hands. Redon painted the work in the years leading up to World War I, potentially drawing a parallel between the horrors inflicted by the opening of her box and those of the war. Pandora’s influence reaches into contemporary art as well; Filipino artist David Medalla, for example, created Cosmic Pandora Micro-Box (2010) by collecting objects he found during a residency in Brazil, like socks, a bar of soap, and oyster shells. By linking ordinary objects and mythology, he questions how pedestrian items can be as impactful as the divine contents of Pandora’s box.

Perseus is one of the foremost heroes of Greek mythology, known primarily for slaying Medusa and Cetus, the sea monster that guarded the princess Andromeda. Queen Cassiopeia, who ruled a mythical version of Ethiopia with her husband, boasted that she and her daughter Andromeda were as beautiful as the Nereids, or sea nymphs. This remark offended Poseidon, god of the sea, and in an act of vengeance against Cassiopeia, he set Cetus loose on the kingdom. After consulting an oracle, Andromeda’s father King Cepheus tied her to a rock on the shore, sacrificing her to appease Poseidon. Perseus then slayed Cetus and made Andromeda his wife. 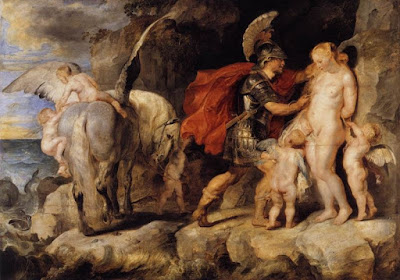 Perhaps the most famous depictions of this myth are by Peter Paul Rubens, who returned to the subject several times. In Perseus frees Andromeda (1620–1622), we see Perseus approaching a chained Andromeda, aided by several putti, or cherubs. The slain Cetus is visible in the lower left corner. Andromeda’s plight also inspired artists centuries later: Frederic Leighton depicted her twisted beneath Cetus as Perseus pierces him with an arrow; while David Gascoyne appropriated the tale in a surrealist take where Andromeda’s head is perched atop a tennis racket.......................