GAUGING THE POSSIBILITIES OF IMPERMANENCE AT THE NEW MOMA

MoMA’s recent expansion embodies the tension between the ways in which cultural spaces can offer visitors comfortable narratives and on the other, how they can suggest the potential for radical inclusiveness by iteration, reinvention, and reinstallation. 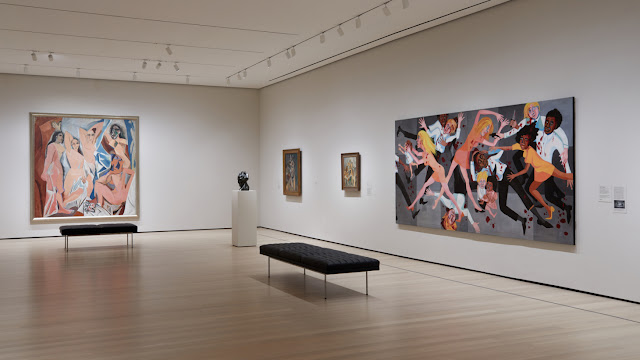 Installation view of “Around Les Demoiselles d’Avignon” (Gallery 503), The Museum of Modern Art, New York. © 2019 The Museum of Modern Art (all images courtesy the Museum of Modern Art, unless otherwise stated; photo by Heidi Bohnenkamp)
While institutionally affiliated resources, such as endowments and museum collections, are embedded with notions of permanence, neither functions in such a solid or immobile form. Beyond the raiding of endowments in times of financial distress that might enable an organization to survive, this impermanence, less dramatically, is reflected in the healthy and regular pruning of museum collections to focus specific holdings or make room for other works (note controversial, to potentially game-changing, and mundane versions of this phenomenon). Permanent collection installations within museum galleries are also malleable, and made fresh periodically by, for example, setting new works against old gems of the collection or installing works along thematic (as opposed to chronological) lines. This is relevant because, while the objects themselves (mostly) remain the same over time, the world changes around them, producing multiple meanings and alternate interpretations perhaps previously invisible. Novel configurations might allow the public to appreciate these works in a new light.

Recently, New York’s Museum of Modern Art reopened after a major expansion initiative that included 40,000 square feet of additional gallery space and a major reinstallation of the collection over three floors of the storied institution. Much has been written about the expansion, ranging from whether the additional square footage will actually relieve overcrowding, to whether the reinstallation has actually shifted underlying modernist narratives or achieved a multicultural transformation, to  whether the $450M price tag is a bargain or not for a museum expansion these days. Rather than re-tread these paths, here I offer a reflection on how, on the one hand, the new MoMA embodies the tension between the ways in which cultural spaces can be zones of comfort via the familiarity of their collections, and on the other, how it suggests the potential for radical inclusiveness by iteration, reinvention, and reinstallation.
For many who grew up near or in New York City, or who have traveled to the Big Apple, a visit to MoMA’s staggeringly rich collection nudged its way into the imagination of what New York is, how it functions, and its place in the evolution of art and ideas. As a kid, on my family’s annual(ish) winter holidays visits to Manhattan from Long Island, we visited museums. Sometimes we went to MoMA and I remember the zigzagging escalators that brought us to the galleries, and the green helicopter hanging precariously to announce the design objects. My favorite place in the museum was the almond-shaped room that held Monet’s “Water Lilies.” The black banquette provided a place to sit at a distance from the expansive painting. It was a place I could think and look, a meditative space where I felt tucked into a fold of art inside the museum. I have no idea if my memories of that particular installation are accurate but that hardly matters. Rather, what is important is that I went back to see that work over time, and while it didn’t change (at least to my eyes), I did.

Institutions like MoMA not only hold artworks that trigger our memories, they also relay narratives of artistic, social, political, and economic histories through their work. Who and what appears in these narratives, and who and what is absent, is not only an indication of the biases held by the museum (its founding principles, workers, board, etc) but also those of larger society. Therefore, I thought it was noteworthy in February 2019, that when MoMA announced its plans to expand, their focus was specifically on highlighting women and people of color in their forthcoming collection redux, and it made me hopeful for necessary revisions, particularly in this historical moment when societal shifts feel so possible and yet simultaneously so unlikely (e.g. Alexandria Ocasio Cortez is a member of Congress while Trump remains President).
This is why MoMA’s reinstallation of its permanent collection is significant, and why it still has a way to travel. Recently, I’ve been reading Ariella Azoulay’s latest book, Potential Histories, Unlearning Imperialism, and one particularly urgent idea discussed at length, regarding unlearning, seems to be budding in MoMA’s reinstallation. Azoulay speaks about the technologies of imperialism as those that operate via categorization and the constant reinforcement of a linear progression of time, limiting the ways anyone or anything may be perceived beyond its defined frameworks. Resisting these categories as well as the pressure of the forward progress of modernism, Azoulay suggests, can be a mode of unlearning imperialism, and the museum is as apt a location as any to attempt this work.

Over the course of multiple visits, I started to find my way around MoMA’s new permanent collection galleries, getting a sense of the flow and ideas at work in the process. It will take many more visits to unearth the unanticipated narratives that might emerge over time, however, even during these hours, there were moments when I delved more deeply into the spaces in which I found myself, captivated by the sheer gorgeousness of what appeared before me. Yet, there were others when I could not work out why objects were arranged the way they were. Mostly, the experience is one that builds on the depth and range of the collection, particularly by remixing materials, breaking down departmental divisions, and seeking both classical and unexpected entry-points to beloved objects, with hints of the energies of the forthcoming generation of MoMA curators and what they might have in store………………