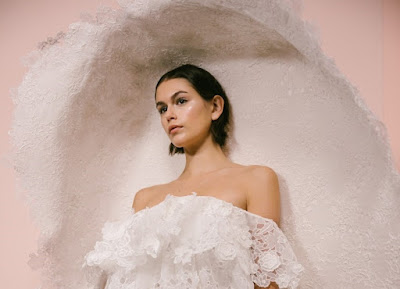 And the bride wore Givenchy.

Known for designing the wedding dress of one of the more recent love stories that’s captivated the world’s attention (ahem, Meghan Markle and Prince Harry), it was British novelists Virginia Woolf and Vita Sackville-West’s love story that inspired Clare Waight Keller for the SS20 Givenchy show.

Titled, Une Lettre D’amour or Love Letters, the British designer found inspiration in the romantic correspondence between the two after a field trip to Sissinghurst Castle Garden in Kent.

One of the most famous gardens in England, Sissinghurst was owned by Sackville-West and her husband. The combination of secret lovers and British botanics inspired Keller to design Givenchy’s couture collection in honour of the affair.

While some of the pieces hark back to Givenchy’s history of dressing movie stars such as Audrey Hepburn and Grace Kelly, Keller put a modern twist on the couture show with belts cinching in model’s waists and tailored shoulders giving us a reprieve from the softness of the show.

Second-generation supermodel Kaia Gerber closed the show in an off-the-shoulder lace wedding gown, but the pièce de résistance had to be the dome veil that shrouded the model like a bird egg.