At the Metropolitan Museum, Making Marvels: Science and Splendor at the Courts of Europe makes clear Europe’s obsession with technological and scientific advancement between 1550 and 1750. 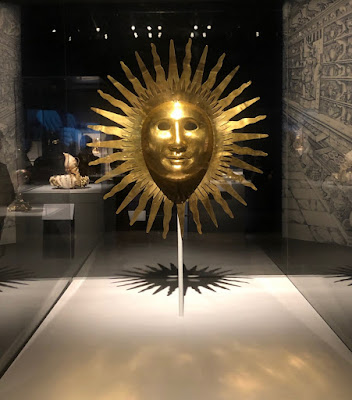 This “Invention” mask from 1709 was worn by Augustus II, also known as August the Strong (all photos by the author for Hyperallergic)

At the Metropolitan Museum, the exhibition Making Marvels: Science and Splendor at the Courts of Europe, greets visitors with the adage “Knowledge is power.” Nothing is more exemplary of the spirit invoked by these collected works. An assortment of 170 items from the early modern era between 1550 and 1750 serves to illustrate Europe’s obsession with technological and scientific advancement, which is a reflection of court society. Not simply focused on accumulating ornate pieces or decorative arts, rulers sought to indulge in objects that represented an exploration of intellectual, scientific, and innovative pursuits — objects that would not only fulfill an aesthetic need but serve as symbols of their sovereign potency and dominance. This collection is the first of its kind in North America and is unique in its portrayal of European court culture as eager to amplify its prestige by harnessing the power of nature, art, and the sciences through these modern objects.

Making Marvels is broken into four sections, the most important of which is possibly represented by objects comprising the Kunstkammer, or “cabinet of curiosities” as it was defined in German territories. These items explore the fixation on unlocking nature’s potential to achieve new levels of both splendor and achievement, an idea that seems to trickle throughout the other galleries. The creation of these pieces relied just as heavily on raw and natural materials (imported from new Spanish colonies Mexico and Peru, for example) as theoretical texts and knowledge, marking a shift to a “new science.” Objects like the Italian 18th-century mechanical paradox, a device that essentially functions as an optical illusion as a double-sided cone appears to roll upwards, bond the scientific exploration of a physical paradox with strict attention to sophisticated craftsmanship. Another striking example of this preoccupation with scientific achievement as represented through art is the ivory telescope that likely wasn’t functional, but symbolized the continual analysis of the cosmos and nature’s use in advancing the objectives of the court.

Time and its representation was another huge fixation of these patrons and their quest for scholarly and artistic dominance. Clocks served as the manifestation of technological advancement, and Making Marvels dedicates a full room to opulent timekeeping devices and “self-moving machines.” These elaborate instruments served as decorative markers of luxury as well as symbols of the rigor and discipline required of a successful ruling party. A particularly impressive piece is the “Two Spherical Clocks” (before 1688) comprised of two brass weighted spheres balanced by an arm representing the hand of God and evocative of the crown and divine motifs. Here we see the intersection of the totality of God, the sovereign body, and the overarching desire to express technological dominance and its associated prestige. “Astronomical Table Clock” (1568) similarly hints at its patron’s nobility and boasts an intricately ornate façade to match its technologically complex interior.

Ultimately, the Met’s sleek smartphone-wielding viewers will indulge in a collection unlike a typical display of decorative arts and come away with the understanding that fashionable and aesthetically pleasing symbols of technology have always been a common pursuit.

Making Marvels: Science and Splendor at the Courts of Europe is on view at the Metropolitan Museum (1000 Fifth Avenue, Upper West Side, Manhattan) through March 1.