THE PERENNIAL PROBLEM WITH THE EXCAVATION OF ANCIENT SITES

Why chase after unprovenanced — and likely looted or forged — material when so much excavated material lies waiting for study? 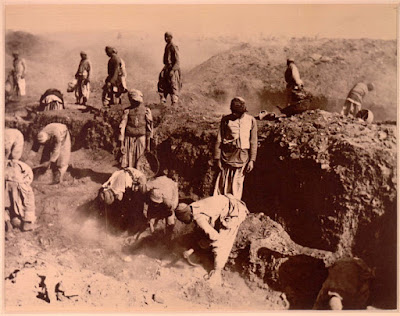 On October 14, the Egypt Exploration Society (EES) announced that 13 texts (12 papyri and one parchment text) had gone missing from its collection housed at the University of Oxford, and ended up in the Museum of the Bible (MOTB) collection. All of the texts were originally from the site of ancient Oxyrhynchus, modern al-Bahnasa, in Egypt. MOTB has been cooperating with the EES and is returning the stolen texts. According to MOTB, most of the texts had been sold to Hobby Lobby (the craft store chain run by the Green family, which also runs MOTB) in 2010 by Dirk Obbink, a prominent scholar of ancient papyri at the University of Oxford who formerly edited the Oxyrhynchus publications and had a longtime association with MOTB. In a statement, Obbink denied the allegations against him. (Meanwhile, the EES has since found that the total number of missing papyri is at least 120, with six traced to California collector Andrew Stimer, who is returning them to EES.)

Whatever the exact details, this situation is a mess. It is rightly seen as a major scandal within the fields of archaeology and papyrology. It reflects poorly on Obbink, of course, if the allegations are true. He allegedly abused his position as editor, stole manuscripts, and sold these stolen goods for profit. The episode also reflects poorly on Hobby Lobby/MOTB, who have once again been caught with stolen or fake artifacts. These repeated Hobby Lobby/MOTB scandals — forced to forfeit thousands of looted cuneiform tablets that were smuggled into the country; purchasing a manuscript stolen from the University of Athens; discovering that several of their supposed Dead Sea Scroll fragments are forgeries — highlight the difficulties of acquiring a large collection of antiquities legally in the 21st century. The scandals also highlight the failure to conduct proper due diligence before purchasing so many ancient artifacts.

But this fiasco also points to an issue much broader than Obbink’s and Hobby Lobby’s behavior. The Oxyrhynchus papyri are a huge group of many thousands of rolls and fragments excavated from al-Bahnasa/Oxyrhynchus. The EES’s collection, which includes most of the known texts from the site, was excavated by British scholars Bernard Grenfell and Arthur Hunt in six seasons between 1896 and 1907. Grenfell and Hunt dug large trash mounds outside of the town, consisting of layers upon layers of papyri and dirt. The exact amount of material recovered is unknown, though Peter Parsons (a former director of the Oxyrhynchus Project at Oxford) has estimated a total of some 500,000 fragments. It is unclear how many separate documents these estimated half a million fragments make up — some documents published from the site were assembled from multiple excavated fragments — but as of 2019 the EES has published 84 volumes of papyri (over the last 120 years) with a total of about 5476 documents.

Whatever the total number of documents, a significant amount of the material is unpublished, and not even fully catalogued or processed. The EES was able to identify the stolen fragments, all unpublished, through its records. But those records were produced in inventories made several decades after the excavation and consist of only brief notes — understandably so, given how much material there was. The very fact that we have only a huge round number for an estimate of total fragments, and that we have no real idea how many documents these make up, shows how little we still know about this material, well over a century after it was first excavated in Egypt and taken to England.

Image captioned “Some of our Fellaheen digging for papyri”from McClure’s Magazine v.9, 1897 May-October (image courtesy and via the Hathitrust)
We can compare the Oxyrhynchus papyri to a similar collection of an estimated hundreds of thousands of documents: the Cairo Genizah. These materials are the textual remains of the medieval and early modern Jewish community of Cairo, mostly taken back to England by the scholar and rabbi Solomon Schechter in the 1890s. Earlier this decade, the different institutions that house documents from the genizah, or storeroom, of the Ben Ezra synagogue in Cairo (and from other sources in the city) launched a crowdsourcing effort just to sort and initially transcribe some of the material before it can be fully inventoried. Meanwhile, a blog post written this October pointed to the discovery of a previously unknown poem of Ibn Gabirol, one of the most famous Jewish poets and philosophers of medieval Spain. The Cairo Genizah material consists of roughly the same number of fragments, collected at the same time, as the Oxyrhynchus papyri. And like the Oxyrhynchus material, we still have little idea of how many documents there are or what many of them contain. (There are of course crucial issues of ethical and legal responsibility whenever we discuss the removal of such collections abroad, especially within the context of 19th-century imperialism, but I want to leave these aside for the moment in order to address a related concern.)

But these collections only scratch the surface of the problem of unpublished material. Berkeley historian Maria Mavroudi estimates that less than five percent of Byzantine scientific and philosophical texts have been published. Many other researchers of the past have suggested similar statistics and problems for texts in their own fields.

The same goes for other kinds of artifacts, too. It is well established that archaeologists are slow to publish their excavations, but the scope of the problem — and its damaging effects — are rarely appreciated. In the more than 15 years in which I was involved in archaeological research in Israel, I often came across excavations that had been conducted 50 or more years earlier, whose results I was interested in but couldn’t access because they remained largely unpublished. One site, Tel Erani (Arabic: Iraq al-Manshiya) is currently on its third different excavation project  since the 1950s, without a single final report on any of this work. Over the decades, finds from sites have to be transferred between storage facilities, making it more likely that they will be misplaced; or they are placed in museums that have since closed down and their collections no longer traceable. I was affiliated with one excavation that held a study season after 16 consecutive summers of digging. We opened the storage facilities to find rats living among the artifacts, having chewed their way through plastic bags containing artifacts, many of them spilled out. The associated tags were often lost or chewed beyond recognition or stained with rat piss. Other material had been discarded before being processed. Too much information about the past had been lost.

This points to a second problem, related to but different from the huge backlog in processing and publication: how to store and preserve finds from excavations. Oxford classicist Llewellyn Morgan remembers taking a class with Peter Parsons as an undergraduate and asking him (“naively,” in Morgan’s words) where the Oxyrhynchus papyri were kept. “Well, quite a few of them are in that shoebox in the corner” was Parsons’s playful response. (In reality, Morgan also points out, Parsons helped improve the facilities for storing papyri at Oxford.) Parsons’s answer was a joke, but its humor plays on the all too real history of problems of storage. Of course, storage is a problem even after cataloguing and publication, but the potential damage is magnified when material has not yet been studied or inventoried.....................