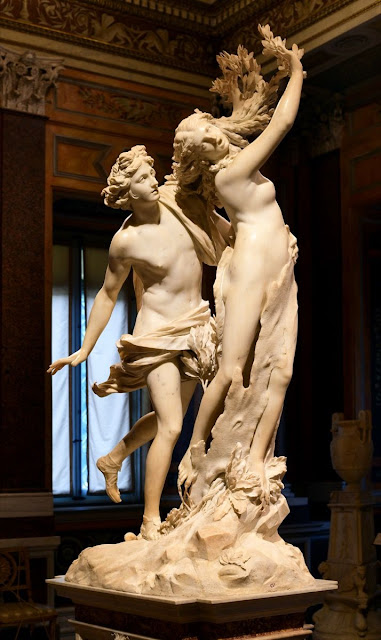 When famed Baroque sculptor Gian Lorenzo Bernini unveiled Apollo and Daphne in 1625, the marble work was resoundingly hailed as a meraviglia—a marvel. Not yet 30 years old, the sculptor had captured motion, transformation, sexual appetite, and terror more convincingly than any other artist working in stone before him. “Immediately when it was...finished, there arose such a cry that all Rome concurred in seeing it as a miracle,” art historian Filippo Baldinucci recalled of the masterpiece’s public debut, in his 1682 biography, Life of Gian Lorenzo Bernini.
Almost 400 years later, Apollo and Daphne remains mesmerizing for both its formal mastery and its disturbing, profoundly relevant subject matter: the ravenous pursuit of a woman, by a man who won’t take no for an answer.
Bernini began carving the sculpture in 1622, at just 23 years old. Already singled out as a prodigy and favored artist of the Roman papacy, he’d been commissioned by the notoriously indulgent Cardinal Scipione Borghese to create a series of sculptures for the cardinal’s palazzo. Though religious art took precedence in Renaissance and Baroque Italy, the Vatican also allowed—and in many cases, encouraged—the depiction of mythological themes. Artists like Bernini used these dramatic tales, full of violence and thinly veiled eroticism, to push the limits of acceptability.

In this sculpture, Bernini depicts the mythological drama that occurs between Apollo, god of music and poetry, and Daphne, a virginal nymph. The artist was likely inspired by the classical sculpture Apollo Belvedere (circa 2nd century CE) as well as the ancient Roman poet Ovid’s rendition of the myth. In Ovid’s telling, the story begins with a pissing contest between two male gods: After Apollo insults Eros (or Cupid), Eros takes revenge by orchestrating a scene of unrequited passion and possession. He shoots a golden arrow into Apollo, which makes him fall desperately in love with Daphne, then embeds a leaden arrow in her, enhancing the repulsion she feels towards her pursuer. 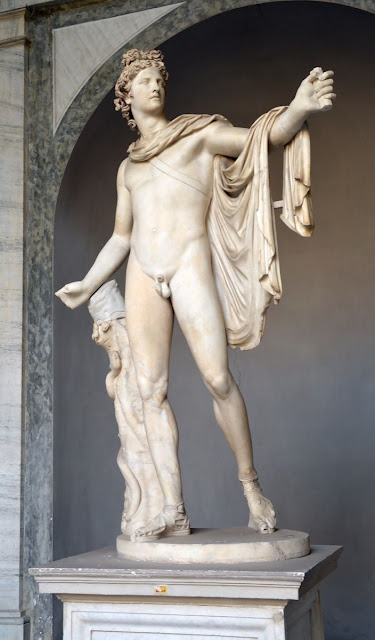 Daphne flees Apollo’s hungry advances. When he catches up to her, she sacrifices her human body and assumes the form of a laurel tree. Even then, as Ovid explains, Apollo doesn’t let up: “[He] loved her still. He placed his hand where he had hoped and felt the heart still beating …
Under the bark and he embraced the branches, as if they were still limbs, and kissed the wood.” Daphne, however, still resisted: “And the wood shrank from his kisses.”
Stories like these, filled with transformation and motion, were of particular interest to Baroque artists, who’d broken away from Renaissance tenets of stability and order, as expressed in works like Michelangelo’s pyramidal Pieta (1498-1499). In particular, Bernini explored formal imbalance—arcing bodies, billowing robes, and howling faces—to challenge his carving abilities and convey drama and human emotion. Contrary to more rigid Renaissance sculptures of the same subject, the muscled body of Bernini’s David (1623) reels back, limbs torqued and straining in space, as he prepares to launch his stone at Goliath, while the titular saint in Ecstasy of Saint Teresa (1647-1652) twists rapturously, head thrown back in abandon. Scholars suspect that Bernini’s realistic, rippling details were informed in part by his use of preparatory wax models.

But nowhere in Bernini’s oeuvre is his fascination with metamorphoses more fully expressed than in Apollo and Daphne. Here, he captures the precise moment when Daphne shapeshifts from woman to tree. Apollo grasps at Daphne’s torso, which has already begun to take the form of bark, while roots sprout from her toes and leaves erupt from her flowing hair. As she lunges skyward, away from Apollo, her body tilts and her open mouth strains. As scholar Andrea Bolland put it, even Daphne’s expression “seems to betray a transformation: The fear of being caught gives over to horror at the means by which she will avoid capture.” Bernini conveys Apollo’s savage sexual appetite through movement as well: the god’s hands flex, his robes threaten to slip off his waist, and a spray of leaves emerging from Daphne point to his groin.

Today, Apollo and Daphne remains in the Borghese Palace, and scholars continue to debate its message. As Bolland noted, arguments range widely. Perhaps Bernini created the sculpture as an allegory to celebrate the dizzying power of art, or to warn against the dangers of sensual poetry. Others posit that it was meant to sublimate carnal desire, or conversely to pleasure the hedonistic Borghese. Works from Bernini from the same period, like the sculptor’s virtuosic Pluto and Proserpina (1621-22), harbor similar questions—and also use violence as a troubling allegorial and artistic vehicle. Like Apollo and Daphne, this piece depicts the savage, sexual hunt of a goddess by a god. Bernini expresses Proserpina’s pain and sorrow, as Pluto clutches at her tender skin, in the form of an agonized expression and single tear.

Indeed, no matter what Bernini’s intention, Apollo and Daphne’s unique ability to convey emotional and physical strain is irrefutable. And today, the sculptor’s masterwork reads as a powerful, disquieting depiction of unwanted pursuit and predation.