JUDY CHICAGO’S COLLABORATION WITH DIOR IS BEAUTIFUL, BUT ITS FEMINIST AMBITIONS ARE QUESTIONABLE

Judy Chicago’s collaboration with the fashion house, a runway-installation called The Female Divine, includes a woven catwalk carpet and 21 banners embroidered with questions including “What if Women Ruled the World?” 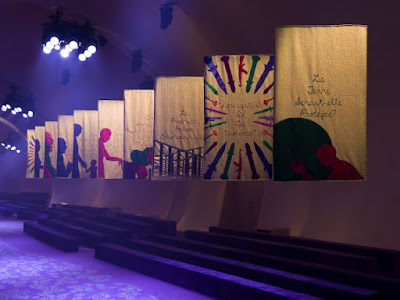 The fashion industry has long occupied an odd place when it comes to feminism, offering women a form of liberation through self-expression while simultaneously setting seemingly impossible, often damaging aesthetic standards. In recent years, with conversations around sexism at the forefront of popular discourse, the industry has become more self-reflective. While initiatives to diversify runways and make changes within the often exploitative world of modeling are valuable, many of fashion’s gestures toward feminist concerns, such as a “feminist protest”-themed 2014 Chanel show or fashion publications changing from a focus on dieting to “wellness,” seem well-intentioned on the surface but ultimately hollow. Fashion is a business, after all.
The latest feminist fashion experiment comes courtesy of Christian Dior and artist Judy Chicago. Dior’s creative director, Maria Grazia Chiuri, commissioned Chicago to create a set-cum-art installation for the iconic couture house’s spring 2020 runway show at the Musée Rodin in Paris. The installation, titled The Female Divine, features a huge inflatable sculpture inspired by a goddess figure, a woven catwalk carpet, and 21 banners embroidered in English and French with questions including “What if Women Ruled the World?” It all makes for an immersive, aesthetically pleasing experience. The political element, however, feels facile. 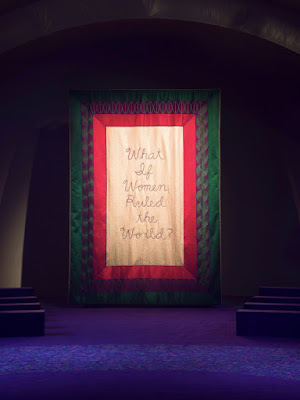 Chicago has a certified place in feminist history — her ’70s installation The Dinner Party made waves for its subversive use of vaginal imagery and its large-scale focus on female achievements, and is on permanent exhibition at the Brooklyn Museum. The question of whether her involvement with Dior automatically confers some feminist authority upon the 73-year-old fashion house is a thorny one. Chicago’s banners, woven by female students at a nonprofit craft school in India, ask, while positing a world ruled by women, “Would Buildings Resemble Wombs?”; “Would God Be Female?”; “Would There Be Violence?”; and so on. While these hypotheticals may be worth considering, a couture show doesn’t seem quite the right place to do it. The models on the runway all fit the fashion industry’s long-held standards of youthfulness and slenderness, and Dior’s couture creations are all firmly in the “price available upon request” category.
Chicago’s installation is briefly open to the public through January 26, but it’s undeniable that the world of a Dior couture show remains a privileged one. The questions on Chicago’s embroideries posit a feminine utopia — a lovely thought, but one that feels a bit too pat given how many women vote against their own interests and how women’s rights stand in immediate danger with a Republican majority. As is unfortunately so often the case with politically-minded art, the people who most need to consider the implications of Chicago’s questions are the least likely to seek them out. The clothes on the runway, featuring glamorous yet subtle metallic tones and precisely tailored, goddess-like draping, are undeniably beautiful, and it’s certain that the combination of these designs with Chicago’s work makes for a striking tableau. Whether the questions within it will make any difference outside of potentially stirring up conversation in the rarefied fashion world remains to be seen.
https://hyperallergic.com/538784/judy-chicago-dior/?utm_medium=email&utm_campaign=D012420&utm_content=D012420+CID_cfc4ce52bcbe4f9ed0777ce5beb02ea8&utm_source=HyperallergicNewsletter