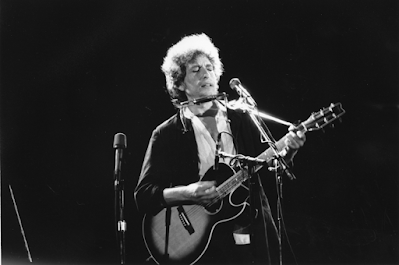 The strangest teacher I had in college turns 80 years old on May 24. And after 39 studio albums, Bob Dylan shows no signs of stopping.

Growing up, I would have laughed at the suggestion that I would one day call myself a Dylan fan. I have no memory of hearing a Dylan song before my sophomore year of college, and the few of his early songs I heard that year didn’t make much of an impression on me. I associated Dylan with hippies, something I had no interest in, and what little I heard did not do much to get me beyond my stereotype: seemingly mediocre voice, outdated sound, lyrics at times verging on nonsensical. Overall, Dylan seemed to me a taciturn court jester of a bizarre and bygone era, one of the many voices in the background noise of my college years, that wouldn’t affect my life in any meaningful way.

That changed. I eventually came to realize there was nothing wrong with Dylan or his music; I just wasn’t ready to hear it. The state you are in when you hear music is often just as important as the substance of the music itself. I had to travel before I could really hear what Dylan was about; had to feel the movement that Dylan felt as he wrote his songs. And that summer before my junior year, movement is what I got: a month-long class in Mexico, two weeks on the road across America and a four-day bus trip back, all the way from Seattle to New England.

I returned to college feeling strong, the movement in my body and the land in my soul. For a brief period, I had the strange feeling that I had absorbed all of America. And when a roommate played his new CD, “Bob Dylan’s Greatest Hits Vol. III,” that is what I heard: seamless layers of folk and blues, bop prosody and country, all infused with a growing tinge of gospel. The raspy tone and earnest rhythmic phrasing deliver timeless stories and vintage Americana; always moving, always searching, even when the exuberance for life gives way to the poignancy of ending worlds................