On 22 May the new Paris home of the Pinault Collection, the 18th-century Bourse de Commerce, opens its doors after a revamp five years in the making. Jonathan Bastable appraises the long-anticipated results

If you could hover directly above the Bourse de Commerce, looking straight down, the building and its environs would form a series of concentric circles. At the very centre would be the dome that sits atop the building like an inverted Song-era tea bowl: delicate, translucent and elegant. 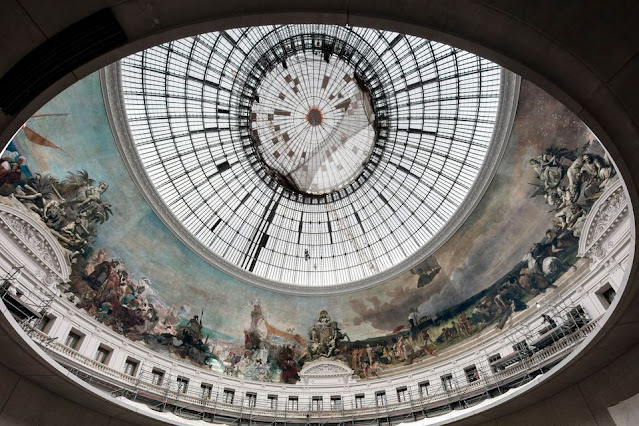 The next visible circle would be formed by the building’s 19th-century biscuit-barrel façade. And beyond the confines of the edifice itself, wider rings are described by the paved roundel of the rue de Viarmes, the curved frontages of the apartment blocks to the west, and the cut-out half-moon of the grassy park to the east.

Circles upon circles, arcs echoing arcs. At first glance the ensemble is as simple as a set of ripples on a pond. But the urban cartography of this small corner of Paris is actually dense and multi-layered.

It is a Jasper Johns target painting wrought in brick and stone, an architectural mandala of Tibetan complexity. And with the re-purposing of the building as a new home for François Pinault’s collection of contemporary art, the topography of the Bourse de Commerce has grown more complex still.

The Bourse, or a first version of it, was built in the 1760s as the Halle aux Blés — the Corn Exchange. It was a kind of bijou colosseum, an open amphitheatre in which grain was bartered and sold.

Less than a decade after it was completed, the hall was covered with a dome, the largest in France at that time. In 1802 the roof caught fire and collapsed, but was replaced 10 years later with a new cast-iron chassis clad in copper. That second parabolic lid is, in form at least, the same as the one that graces the Bourse today.

In the 1880s, the building was reimagined once more. The exterior was totally demolished, leaving only the internal colonnade and the ribbed carcass of the dome, which now acquired an oculus, a round window at its zenith to let light in.

As for the building’s exterior, an entirely new envelope was constructed in the contemporary idiom. The Bourse was now clothed in a continuous façade, punctuated with Neoclassical pilasters, to reflect the stately style and confident swagger of the Third Republic.

This arena was still a commercial building — but an abstracted one that dealt in stacks of figures rather than sacks of wheat. To underline its noble and fiscal function, five large frescos were installed in the dome, where they could be admired from the trading floor.

These tableaux depicted in symbolic terms the history of French trade across the five continents — the global reach of an energetic, mercantile nation. It was now that the institution was renamed the Bourse de Commerce.

This is the building that was taken on five years ago by the Pinault Collection. The Bourse had lain dormant for 20 years before that.

The quarter where it is located had once been the hub of the food trade — ‘the belly of Paris’, as Emile Zola called it — but these streets were by now the cultural heart of the capital. The Pompidou Centre, erected on the old marketplace of Les Halles, is a short walk away across the Jardin Nelson Mandela.

According to Martin Bethenod, director of the Bourse de Commerce, the geographical location of the new gallery enhances its role and its meaning. ‘This will be the only museum in Paris that is entirely devoted to a single collection of contemporary art,’ he says.

‘That makes a unique event of the imminent opening of the space, here on this site between the Centre Pompidou and the Louvre — not least because the building itself is a kind of hyphen between the city’s inheritance on the one hand and a radically present-day creativity on the other.’

The radical creativity that Bethenod has in mind is the astonishing transformation that architect Tadao Ando has effected inside the building.

Ando, renowned for his use of geometric forms and natural light, and for his sensitivity to milieu, has inserted an enormous concrete cylinder that sits inside the older space and rises almost to roof level.

This new inner wall, rising like a sheer Jurassic cliff face, constitutes yet another circular element within the structure. It remains hidden and invisible until you are inside the Bourse, and it is all the more breathtaking for that.