WHAT THE “NEFERTITI HACK” TELLS US ABOUT DIGITAL COLONIALISM

A hacked 3D scan of the famous sculpture shows how traditional models of heritage ownership might change in museums. 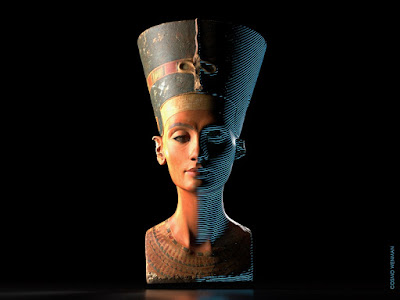 In 1912, the famed painted limestone and stucco bust of Egyptian queen Nefertiti was excavated by German archaeologists using Egyptian labor. The newly revealed bust lived up to the queen’s name, which means “the Beautiful One Is Here”, as it was pulled from behind a door in the house of the master sculptor Thutmose at Tell el-Amarna, about 150 miles south of Cairo. The day of the discovery, lead archaeologist Ludwig Borchardt jotted down a prescient note:

Colours look freshly painted. Really wonderful work. No use describing it, you have to see it.

For millions of viewers since then, Borchardt’s recommendation has been taken to heart. Created around 1340 BCE and weighing 44 pounds, the captivating polychromatic bust was unveiled to the public at the Egyptian Museum in Berlin in 1923.

The story of the Nefertiti bust provides a window into the European domination of excavations in Egypt and other Mediterranean archaeological sites in the late 19th and early 20th century. French, German, and British excavators were often supercilious in their defense of looting cultural heritage from classical sites in the Eastern Mediterranean in order to be “protected” within European museums. They also developed cunning methods for carrying out their work. In the Nefertiti bust’s case, overwhelming evidence suggests its removal to Germany in 1913 was not legal then and remains both illicit and unethical today — a wrong yet to be rectified.

Much of the storied history of the bust is reconstructed by archaeologist Joyce Tyldesley in her book, Nefertiti’s Face: The Creation of an Icon. In it, she recounts the lengths gone to by European and then American archaeologists to hide objects from inspectors when, at the end of a dig, the finds from sites were to be divided between the Western countries granted licenses by the French to excavate and the native Egyptian authorities. When French archaeologist and Louvre emissary Auguste Mariette became the first Conservator of Egyptian Monuments in 1858, he opposed training native Egyptians as professional archaeologists. The “School of the Ancient Egyptian Language” opened in 1869, but Mariette feared native Egyptians learning to translate hieroglyphics and other ancient languages as a potential threat to European archaeologists. German Egyptologist Heinrich Karl Brugsch, the director of the short-lived school, remarked on Mariette’s paranoia over being replaced by Egyptian professionals:

No matter how much I tried to set his mind at ease, [Mariette] remained so suspicious that he gave the order to museum officials that no native be allowed to copy hieroglyphic inscriptions.

Whether in the Antebellum South or in 19th century Egypt, White control over the literacy of marginalized persons has always been a tactic for control. Egyptology did not begin to be decolonized and to encourage the training of native Egyptians within the Antiquities Service until the 1920s. French oversight within the Antiquities Service in Egypt did not end until 1952, after almost a century of colonial control. Mostafa Amer, its first Egyptian director, was appointed in 1953.

During the inspection of dig finds in the early 20th century, artifacts were often hidden from view, mislabeled on lists, or covered with mud in order to avoid being taken in the 50/50 division of cultural heritage between European licensees and the Egyptian state. The French inspectors at the Antiquities Service also had the right to commandeer finds at any time to be kept in Cairo. The tactic to get around these inspections was to play down anything you wanted to keep as unmemorable, forgettable, prosaic. And Nefertiti was and is anything but.

As Tyldesley notes, the Nefertiti bust was placed inside an excavation box and then black and white photos outside of the closed container were presented to the French inspector Gustave Lefebvre. Lefebvre’s cursory exam of these photos (and perhaps some mud used to dirty up the bust if he had looked closer) meant that the exquisite polychromatic beauty of the bust went unrecognized. Borchardt later confided to the German art critic Julius Meier-Graefe, in regards to the Nefertiti bust, that “The gents in Cairo were just too slack to look in the box.” The Germans notified back at the Deutsche Orient-Gesellschaft (the German Oriental Society) wanted Nefertiti in order to draw visitors to Berlin, and by 1913, they had her in their possession.

For almost a decade after the bust’s tantalizing but brief unveiling in the courtyard of the Neues Museum in Berlin in 1913, she was kept out of public view for fear the Antiquities Service in Egypt would be riled about her export and perhaps terminate excavation licenses in retaliation. Nefertiti’s lure was immediate when finally put on display in the Neues Museum in 1923, although she was hidden away in a German salt mine during World War II. The museum would then be hit with Allied bombs in 1943 and 1945............