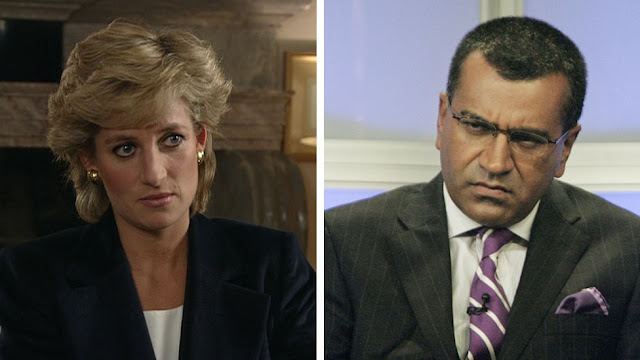 The BBC fell short of "high standards of integrity and transparency" over Martin Bashir's 1995 interview with Princess Diana, an inquiry has found.

Bashir acted in a "deceitful" way and faked documents to obtain the interview, the inquiry said.

And the BBC's own internal probe in 1996 into what happened was "woefully ineffective", it added.

The BBC and Bashir have both apologised, and the BBC has written to Princes William and Harry.

The corporation said the report showed "clear failings", admitting it should have made more effort to get to the bottom of what happened at the time.

As well as Diana's sons, the BBC has also written apologies to Prince Charles and Diana's brother Earl Spencer. It is also returning all awards the interview received, including a TV Bafta won in 1996.

What is the Diana interview row all about?

Bashir said mocking up the documents "was a stupid thing to do" and he regretted it, but said they had had no bearing on Diana's decision to be interviewed.

Lord Dyson - the retired judge who led the inquiry - found:

He showed the fake documents to Earl Spencer, to gain his trust so he would introduce Bashir to Diana

By gaining access to Diana in this way, Bashir was able to persuade her to agree to give the interview

And as media interest in the interview increased, the BBC covered up what it had learnt about how Bashir secured the interview. Lord Dyson said this "fell short of the high standards of integrity and transparency which are its hallmark"

Princess Diana's interview with Bashir for Panorama was a huge scoop for the BBC - in it, the princess famously said: "There were three of us in this marriage."

It was the first time a serving royal had spoken so openly about life in the Royal Family - viewers saw her speak about her unhappy marriage to Prince Charles, their affairs, and her bulimia.

But since then Diana's brother, Earl Spencer, has questioned Bashir's tactics to get the interview.

The independent inquiry was commissioned by the BBC last year, after Earl Spencer went public with the allegations. Its findings were published on Thursday.

The earl told BBC Panorama: "Well, the irony is that I met Martin Bashir on the 31st of August 1995 - because exactly two years later she died, and I do draw a line between the two events."

He said it was "quite clear" from when he introduced Bashir to Diana in September 1995 that "everyone was going to be made untrustworthy, and I think that Diana did lose trust in really key people".

He said after the interview, Diana lost "the royal support structure that had guided and safeguarded her for so many years" which "inevitably made her vulnerable to people who didn't have her best interests at heart, or were unable properly to look after her".

Lord Dyson found that Bashir deceived Earl Spencer by showing him forged bank statements that falsely suggested individuals - including Mr Jephson - were being paid for keeping the princess under surveillance.

The inquiry said Bashir had later lied, telling BBC managers he had not shown the fake documents to anyone.

And it described significant parts of Bashir's account of the events of 1995 as "incredible, unreliable, and in some cases dishonest".

The Dyson Report shows a catalogue of moral, professional and editorial failures at the BBC in the 1990s, which occur on three main levels.

First, the interview of the century was obtained by deception. Martin Bashir has admitted to forging bank statements. This report says he lied repeatedly to several people, including at the BBC.

Second, the investigation led by future director general Tony Hall was "woefully ineffective". Bashir was believed far too readily. Earl Spencer was not interviewed. Crucially, Dyson rejects the grounds given for this failure by Hall and his team.

Finally, Dyson uses a phrase which he knows to be explosive. There was a "covering up". The origin of the cover up is not clear. But no matter: the BBC conspired, on vast scale, to deceive the public it is funded by and serves.

This report will not just injure the BBC, but scar it. And it should be granted that though it shows the historic failures of BBC journalists, it also shows the power and merit of journalism.

It is thanks to determined reporters, not least at the Daily Mail group and the Sunday Times, that we today have the first full account of the real story behind the most remarkable - and arguably consequential - interview in television history.

In a statement, Bashir apologised for mocking up the documents, but said he remained "immensely proud" of the interview.

He said: "The bank statements had no bearing whatsoever on the personal choice by Princess Diana to take part in the interview.

"Evidence handed to the inquiry in her own handwriting unequivocally confirms this, and other compelling evidence presented to Lord Dyson reinforces it."

For the first time, Diana's note that she wrote after the interview was broadcast has been published as part of the inquiry.

In it, she wrote: "Martin Bashir did not show me any documents, nor give me any information that I was not previously aware of."

As well as Bashir, the report also criticises the BBC over how it handled the claims about Bashir's tactics.

In 1996, the BBC carried out its own investigation which cleared Bashir, Panorama and BBC News of wrongdoing.

And as scrutiny from the press increased, the BBC gave "evasive" answers to journalists' questions, he said.

When the BBC was asked about the bank statements by journalists in March 1996, senior BBC officials - including Lord Hall - already knew Bashir had lied three times about not having shown them to Earl Spencer, the report said.

But the BBC press office told journalists that Bashir was "an honest and honourable man".

Lord Dyson said he was "satisfied that the BBC covered up in its press logs such facts as it had been able to establish about how Bashir secured the interview".

He said the BBC "fell short of the high standards of integrity and transparency which are its hallmark".

In a statement, Lord Hall said he was wrong to give Bashir the "benefit of the doubt" at the time.

He added: "Throughout my 35-year career at the BBC, I have always acted in ways I believe were fair, impartial and with the public interest front and centre.

"While Lord Dyson does not criticise my integrity, I am sorry that our investigation failed to meet the standards that were required."

The BBC's current director general, Tim Davie, said: "Although the report states that Diana, Princess of Wales, was keen on the idea of an interview with the BBC, it is clear that the process for securing the interview fell far short of what audiences have a right to expect. We are very sorry for this. Lord Dyson has identified clear failings.

"While today's BBC has significantly better processes and procedures, those that existed at the time should have prevented the interview being secured in this way.

"The BBC should have made greater effort to get to the bottom of what happened at the time and been more transparent about what it knew.

"While the BBC cannot turn back the clock after a quarter of a century, we can make a full and unconditional apology. The BBC offers that today."

BBC News understands that in a letter sent by Mr Davie to Prince Charles, Mr Davie apologised for Bashir's "lurid and untrue claims" about the prince, members of his staff and other members of the royal family.

The letter said the BBC accepts that Mr Bashir made the claims "intending to play on the princess's fears, in order to arouse her interest in him, and without concern for the impact on those he maligned".

The chairman of the corporation, Richard Sharp, said the BBC "unreservedly accepted" the report's findings that there were "unacceptable failures".

"We take no comfort from the fact that these are historic," he said.

Meanwhile, Lord Birt - who was BBC director general at the time of the interview - said thanks to the inquiry, "we now know that the BBC harboured a rogue reporter on Panorama".

He said it was a "shocking blot on the BBC's enduring commitment to honest journalism" and it was a matter of "the greatest regret" that it had taken 25 years for the truth to emerge.

As well as Diana, he also made headlines for his 2003 interview with the pop star Michael Jackson. He has worked for ITV and various US television networks.

Last week he left the BBC, citing ongoing health issues. He had been the corporation's religion correspondent and editor since 2016.

"It's taken 25 years to get the truth. It raises the question in your mind, how many more cover-ups are there in the files of BBC journalism that we haven't been told about?"

Former BBC governor Sir Richard Eyre said the board of governors would have insisted on a full inquiry if they had known about Bashir's actions.

"The fact that Bashir lied should have been made clear to us, but in my memory, it never was," he said. "We can see now that the false bank statements were the lever that opened the doors to the access to Diana."