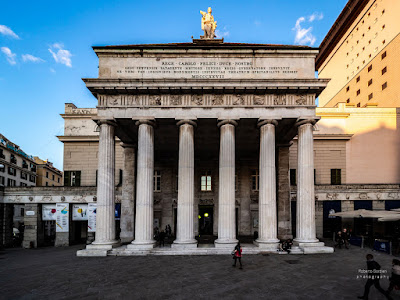 Teatro Carlo Felice in Genoa finally rediscovers its everyday musical life and presents its May and June 2021 concert and opera programme.

Programme includes a new production of L'elisir d'amore by Gaetano Donizetti, to be premiered on June 10 (reruns on 11, 12, 13, 16 June), featuring the soloists of the Accademia del Teatro Carlo Felice (artistic director Francesco Meli). On Lele Luzzati's 100th birth anniversary, the productions will feature his famous scenography and sets, with the direction of Davide Garattini Raimondi and costumes by Santuzza Calì. Alessandro Cadario conducts the Orchestra and Coro del Teatro Carlo Felice.

Superintendent Claudio Orazi declares: «After the success of our “musical marathon” in the occasion of the theatre’s reopening, we are ready to welcome the audience again and safely. We’ve planned some important symphonic and choral concerts in May and in June, featuring our theatre’s Orchestra, Chorus and Children's Choir, with conductors such as Luisotti, Lonquich, Renzetti, Luisi. In June, we celebrate Lele Luzzati’s 100th birth anniversary with the performance of L'elisir d'amore by Donizetti, on one of his most beloved set designs, with the soloists of the Accademia del Teatro Carlo Felice (artistic director Francesco Meli) and Alessandro Cadario as the conductor. The opera will then be staged in September at the Teatro degli Arcimboldi in Milan, as part of a collaboration project with the theatre. Our Chorus and Children's Choir’s concerts, mainly set in spiritual locations, will be notable. Last but not least, our "Da Ponte & Friends" programme will be taken to some of the most beautiful theatres in the world, starting with the Olimpico in Vicenza (20 June) thanks to the collaboration with the Municipality of Vicenza: the beginning of a musical journey that will continue around the world».

The symphonic concert on Friday 14 May, at 8.00 pm features Nicola Luisotti on the occasion of his return in Genova as concert master and director of the Orchestra del Teatro Carlo Felice, in a program that combines Symphony in D major by Luigi Cherubini (1815), seldom performed, despite its grandiose design, in which formal mastery merges with a keen sense of thematic elaboration, and famous Symphony n. 3 in F major op.90 by Johannes Brahms, performed for the first time in 1883, the year of its creation, at Vienna’s Musikverein, under the musical direction of Hans Richter.

On Tuesday 18 May at 8.00 pm, Alexander Lonquich at the head of the Orchestra del Teatro Carlo Felice as concert master, conductor and soloist will perform Concerts for piano and orchestra n. 14 in E flat major K. 449 and n.17 in G major, K. 453 by Wolfgang Amadeus Mozart. Between the two, Symphony no. 83 in G minor "La Poule" (The hen), Hob: I: 83 by Franz Joseph Haydn, which owes its popularity to the characteristic second theme of the first movement, extending a ray of “sunshine” through a composition written by Haydn, far from his stormy Sturm und Drang period, in a minor key.

The concert conducted by Donato Renzetti, Saturday 22 May, begins with Claude Debussy's Petite suite for two pianos (1888-89), in the transcription for orchestra by Henri Büsser. Follows the suite Gli uccelli by Ottorino Respighi, from 1927, linking to the series of Antiche Arie e danze, featuring 17th and 18th century music for harpsichord or lute evoking birds songs (Bernardo Pasquini, Jacques de Gallot, Jean-Philippe Rameau) transcribed by Respighi and unified in a coherent suite. In the second part, Symphony n. 3 in A minor op. 56 “Scottish” by Felix Mendelssohn-Bartholdy is perfect synthesis of formal classical canons and romantic spirit, and is characterized by conceptual unity and narrative continuity, Mendelssohn's last symphony (published as the third of a corpus of five) was composed and performed in 1842. His first ideas, however, were sketched in 1829 during a trip by the composer to Edinburgh in the footsteps of Mary Stuart, in whose coronation chapel, in ruins, he wrote to his family: «Today, in this ancient chapel, I believe I have found the beginning of the Scottish Symphony ».

The concert conducted by Fabio Luisi on Thursday 27 May is dedicated to the revolutionary Symphony No. 4 by Anton Bruckner, “Romantic”, in four majestic movements. The opera, composed in over four years, of great personal instability which Bruckner's self-critical spirit could only accentuate, marks the first, fragile success of the Austrian composer. With this work he ended by earning the appreciation of critic Eduard Hanslick, a bitter detractor of Wagner and of all those who, while cultivating robust and independent personalities, dared to take the side of his musical conception.

Scheduled from 10 to 16 June, L'elisir d'amore is a playful work written by Gaetano Donizetti in 1832 with a libretto by Genoese Felice Romani, inspired by Le Philtre by Daniel Auber on Eugène Scribe’s libretto, which was quite popular in Paris in those years. In just a two acts lapse, Donizetti cunningly condenses comic and semi-serious genres, amalgamating in the mix a metateatral dimension. The result is a comedy of misunderstandings and intrigues of great melodic vitality, whose plot, ready to "snap" like a trap, will mercilessly rewind around the fate of the conspirators.