THE SHADOW OF VESUVIUS: A LIFE OF PLINY. NOW, SPANISH TRANSLATION

The Roman Empire comes to life through the biographies of two influential men. 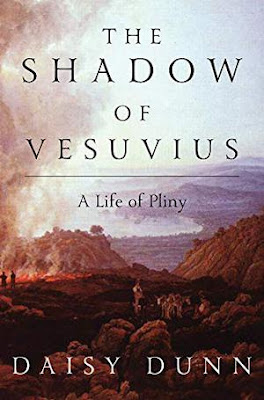 Classicist Dunn (Catullus' Bedspread: The Life of Rome's Most Erotic Poet, 2016, etc.) creates a vivid tapestry of the Roman world focused on naturalist Pliny the Elder (23/24-79 C.E.), who perished when Vesuvius erupted, and his nephew—and adopted son—Pliny the Younger (c. 62-133 C.E.), a lawyer, senator, landowner, and poet who lived “at the very center of things in the first and early second centuries.” Drawing largely on the Elder’s encyclopedic, 37-volume Natural History and the Younger’s prolific letters and speeches, Dunn depicts them as “Renaissance men in their own time,” revered among their peers and by later generations. Darwin, for example, a member of the Plinian Society as a medical student, owned a "well skimmed translation” of Natural History, which influenced his thinking about heredity. Although both Plinys shared “an enquiring mind, an eye for minutiae, obsessive diligence,” and a “love of stories, not only of the natural world, but of extremes of human behavior,” the younger man could be pompous, self-centered, “attuned to detail and hard fact, obedient to protocol. Where his uncle was creative,” Dunn notes, “Pliny was pedantic.” He worked happily in solitude, preferring his rural villas—served by some 500 slaves—to the bustle of the city. Like his uncle—and also Cicero, Virgil, and Emperor Marcus Aurelius, among many other prominent Romans—Pliny adhered to Stoicism, “a philosophy for achieving equilibrium in a frantic world, through which you learned to become master of yourself and your emotions.” Besides exploring his philosophical beliefs, Dunn examines Pliny’s attitudes about medicine, agriculture, and marital relations along with his role in the political intrigues and rivalries that marked the reigns of the cruel Emperor Domitian, who exiled philosophers from Italy, and Emperor Trajan, a popular ruler for whom Pliny served as deputy. Their correspondence reveals the tensions that arose from the burgeoning of Christianity, portending “a change that was to come at the heart of Rome’s empire.”

A sensitive, spirited investigation of the ancient world.