When the Nazis came to power, the writer Charlotte Beradt began collecting dreams. What did she learn? 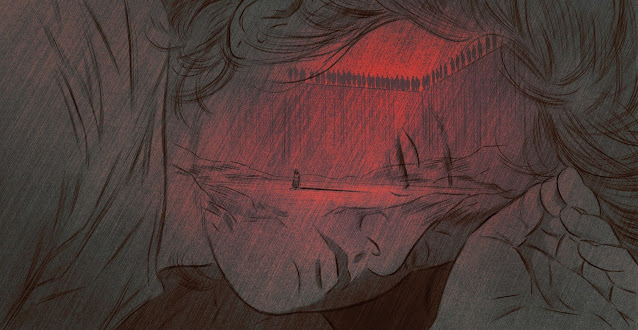 The dreams Germans had while the Nazis were in power reveal the effects the regime had on the collective unconscious.Illustration by Isabel Seliger

Not long after Hitler came to power, in 1933, a thirty-year-old woman in Berlin had a series of uncanny dreams. In one, her neighborhood had been stripped of its usual signs, which were replaced with posters that listed twenty verboten words; the first was “Lord” and the last was “I.” In another, the woman found herself surrounded by workers, including a milkman, a gasman, a newsagent, and a plumber. She felt calm, until she spied among them a chimney sweep. (In her family, the German word for “chimney sweep” was code for the S.S., a nod to the trade’s blackened clothing.) The men brandished their bills and performed a Nazi salute. Then they chanted, “Your guilt cannot be doubted.”

These are two of about seventy-five dreams collected in “The Third Reich of Dreams,” a strange, enthralling book by the writer Charlotte Beradt. Neither scientific study nor psychoanalytic text, “The Third Reich of Dreams” is a collective diary, a witness account hauled out of a nation’s shadows and into forensic light. The book was released, in Germany, in 1966; an English translation, by Adriane Gottwald, was published two years later but has since fallen out of print. (Despite ongoing interest from publishers, no one has been able to find Beradt’s heir, who holds the rights.) But the book deserves revisiting, not just because we see echoes today of the populism, racism, and taste for surveillance that were part of Beradt’s time but because there’s nothing else like it in the literature of the Holocaust. “These dreams—these diaries of the night—were conceived independently of their authors’ conscious will,” Beradt writes. “They were, so to speak, dictated to them by dictatorship.”

Beradt—who was born Charlotte Aron, in Forst, a town near the German-Polish border—was a Jewish journalist. She was based in Berlin when Hitler became Chancellor, in 1933. That year, she was barred from publishing her work, and she and her husband, Heinz Pol, were arrested during the mass roundups of Communists that followed the passage of the Reichstag Fire Decree. After her release, she began secretly recording the dreams of her fellow-Germans. For six years, as German Jews lost their homes, their jobs, and their rights, Beradt continued making notes. By 1939, she’d gathered three hundred dreams. The project was risky, not least because she was known to the regime. Pol, who once worked for Vossische Zeitung, Germany’s leading liberal newspaper, soon fled to Prague, and Beradt eventually moved in with her future husband, the writer and lawyer Martin Beradt.

The Beradts lived in Charlottenburg—a largely Jewish suburb of Berlin, which was home to figures such as Walter Benjamin and Charlotte Salomon—and the dreams Beradt gathered reflect the area’s secular, middle-class milieu. “Enthusiastic ‘yes men’ or people who drew some advantage from the regime were not readily accessible to me,” Beradt writes. “I asked a dressmaker, neighbor, aunt, milkman, friend—generally without revealing my purpose, for I wanted the most candid and unaffected responses possible.” Her friends included a doctor who “unobtrusively” canvassed patients in his large practice.

To protect herself and those she interviewed, Beradt hid her transcripts inside bookbindings and then shelved them in her private library. She disguised political figures, turning dreams of Hitler, Göring, and Goebbels into “family anecdotes” about Uncles Hans, Gustav, and Gerhard. Once book burnings and home searches became fixtures of state control, Beradt mailed her notes to friends overseas. In 1939, she and Martin left Germany and eventually arrived in New York, as refugees. They settled on West End Avenue, and their apartment became a gathering place for fellow-émigrés, such as Hannah Arendt (for whom Beradt translated five political essays), Heinrich Blücher, and the painter Carl Heidenreich. In 1966, after retrieving her transcripts, Beradt finally published the dreams, in Germany, as “Das Dritte Reich des Traums.”

“The Third Reich of Dreams” unfolds over eleven chapters, arranged by recurring symbols and preoccupations. Epigraphs from Arendt, Himmler, Brecht, and Kafka give ballast to the surreal material that follows, and chapters are titled with emblematic figures—“The Non-Hero,” “Those Who Act”—and gnomic quotes such as “Nothing Gives Me Pleasure Anymore.” These headings reinforce the book’s premise: that the links between waking life and dreams are indisputable, even evidentiary. In an afterword, the Austrian-born psychologist Bruno Bettelheim notes the collection’s many prophetic dreams, in which, as early as 1933, “the dreamer can recognise deep down, what the system is really like.”

Like Svetlana Alexievich’s oral histories of postwar Soviet citizens, Beradt’s work uncovers the effects of authoritarian regimes on the collective unconscious. In 1933, a woman dreams of a mind-reading machine, “a maze of wires” that detects her associating Hitler with the word “devil.” Beradt encountered several dreams about thought control, some of which anticipated the bureaucratic absurdities used by the Nazis to terrorize citizens. In one dream, a twenty-two-year-old woman who believes her curved nose will mark her as Jewish attends the “Bureau of Verification of Aryan Descent”—not a real agency, but close enough to those of the time. In a series of “bureaucratic fairy tales” that evoke the regime’s real-life propaganda, a man dreams of banners, posters, and barracks-yard voices pronouncing a “Regulation Prohibiting Residual Bourgeois Tendencies.” In 1936, a woman dreams of a snowy road strewn with watches and jewelery. Tempted to take a piece, she senses a setup by the “Office for Testing the Honesty of Aliens.”

These dreams reveal how German Jews and non-Jews grappled with collaboration and compliance, paranoia and self-disgust, even as, in waking life, they hid these struggles from others and themselves. The accounts are interwoven with Beradt’s sharp, unembellished commentary, which is deepened by her own experience of Nazism and emigration. By foregrounding dreams, instead of relegating them to colorful secondary material in a more conventional history, Beradt allows the fantastical details to speak louder than any interpretation. Her book recalls the photomontages of Hannah Höch, in which objects, text, and images from the German media are scissored up and juxtaposed, producing unexpected scenarios that feel all the more truthful for their strangeness.

At times, “The Third Reich of Dreams” also echoes Hannah Arendt, who saw totalitarian rule as “truly total the moment it closes the iron vice of terror on its subjects’ private social lives.” Beradt seems to agree with this premise—she understood dreams as continuous with the culture in which they occur—but she also presents dreams as the one realm of free expression that endures when private life falls under state control. Under such conditions, the dreamer can clarify what might be too risky to describe in waking life. Beradt recounts the dream of a factory owner, Herr S., who is unable to muster a Nazi salute during a visit from Goebbels. After he struggles for half an hour to lift his arm, his backbone breaks. The dream needs little elaboration, Beradt writes; it’s “devastatingly clear and almost vulgar.” In a period during which the individual was reduced either to a parasite or to a member of a faceless mob (“I dreamt I was no longer able to speak except in chorus with my group”), dreams offered a rare opportunity to restore a sense of agency.

Beradt’s book does not include any dreams with religious content, and there are no dreams from the Eastern European Jews who lived across town, on Grenadierstrasse and Wiesenstrasse—that is, the Jews who had already survived pogroms. But these absences do not detract from Beradt’s vivid, indelible details, which deepen our understanding of life during Nazism’s early years—a period still overshadowed in the literature by accounts of mass murder and war. Especially novel is Beradt’s study of the many urban women—Jewish and non-Jewish—who narrate their own (dream) lives. Here is Göring trying to grope a salesgirl at the movies; here is Hitler, in evening clothes, on the Kurfürstendamm, caressing a woman with one hand and distributing propaganda with the other. “There can be no neater description of Hitler’s influence on a large sector of Germany’s female population,” Beradt writes, noting the numbers of women who voted for him and his party’s calculated manipulation of his supposed “erotic” power. But the dreams also depict women—reduced to obedient wives and child-bearers in Nazi propaganda—seeking greater social authority. In one instance, a woman has just been classified by the race laws as one-quarter Jewish. And yet, in a dream, she is led by Hitler down a grand staircase. “There was a throng of people below, and a band was playing, and I was proud and happy,” she told Beradt. “It didn’t bother our Führer at all to be seen in public with me.”

The final chapter of “The Third Reich of Dreams” is reserved for those who—in their dreams, at least—resisted the regime (“I dreamed that it was forbidden to dream, but I did anyway”) and those who were Jewish. Beradt writes that such dreams “constitute a separate category, just as the Jews themselves were a separate category under the Nazi regime” and were the focus of “direct, not indirect terrorization.” A Jewish doctor dreams he’s the only physician in the Reich who can cure Hitler. When he offers to donate his services, a blond youth in Hitler’s entourage cries, “What! You crooked Jew—no money?” Later, a Jewish lawyer dreams of travelling through icy Lapland to reach “the last country on earth where Jews are still tolerated”—but a customs official, “rosy as a little marzipan pig,” throws the man’s passport onto the ice. Ahead, unreachable, the promised land shimmers “green in the sun.” It is 1935. Six years later, the mass deportations would begin.

In Germany, “The Third Reich of Dreams” was reviewed as “surprising and gripping evidence” and an “important historical document.” As the psychoanalyst Frances Lang has noted, it’s strange, then, that Beradt’s book has gone “virtually unrecognised” in America. Perhaps it was difficult for such an idiosyncratic history to compete with the more urgent, straightforward accounts that appeared in the nineteen-sixties. (The book is contemporaneous with both Arendt’s “Eichmann in Jerusalem” and Raul Hilberg’s “The Destruction of the European Jews.”) And yet there is still time for the collection to enter the canon of Third Reich literature, and perhaps for it to gain wider circulation. Lang, who practices in Boston, learned of Beradt’s work via a footnote in Freud’s “The Interpretation of Dreams” and wrote about it in the Journal of the American Psychoanalytic Association. In her own practice, she has noticed a widespread uneasiness following Trump’s election. She has asked her friends and colleagues to begin collecting dreams.

Mireille Juchau, a novelist, essayist, and critic, is the author of “The World Without Us” and “Burning In.”