Hugo Ball, a poet and Dadaist, wearing a Cubist costume at the Cabaret Voltaire in Zurich in 1916. 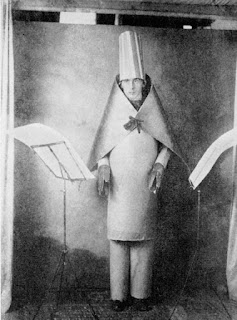 On July 14, 1916, the poet Hugo Ball proclaimed the manifesto for a new movement. Its name: Dada. Its aim: to “get rid of everything that smacks of journalism, worms, everything nice and right, blinkered, moralistic, europeanised, enervated.” This aim could be achieved simply by saying: “Dada.”
Ball and a loose assembly of fellow artists and exiles had been meeting at Cabaret Voltaire, a Zurich club, since February of that year. Dada performances offered an explosion of poetry, music and political theater — poetry shorn of intelligible words, music devoid of melodies and statements in which the message was cannibalized by the absurdity of the language. For if Dada was, at heart, a protest against a European civilization hellbent on war, it also announced itself as anti-art. Almost at the very first signs of success — and the Zurich group quickly spawned imitators from Paris to Berlin to New York — it self-detonated.
However short-lived, Dada constitutes something like the Big Bang of Modernism. Here, New York Times critics trace the movement’s influence in music, art and dance, while tracking some living heirs. CORINNA da FONSECA-WOLLHEIM 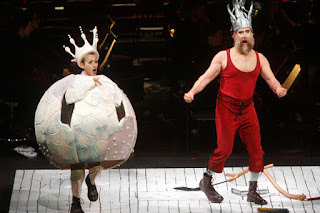 Birth of the Shh!

Erik Satie was in his 50s and the gleeful instigator of a string of scandals when, in 1919, he came into the orbit of the Dada movement in Paris. With his contrarian bent, rejection of traditional virtuosity and a taste for the absurd, Satie seems to have prefigured Dada. His “Vexations,” apparently intended to be played 840 times without a break by a pianist with a very strong bladder, was written more than 20 years before the Dadaist Francis Picabia “composed” his “La Nourrice Américaine” (“The American Nurse”), consisting of three notes repeated ad infinitum.
Among the many interconnected arts the Dadaists pursued, music was of special interest because it naturally resists interpretation. Much of Dada’s original performance art seemed intent on bringing language closer to that same abstract state. Kurt Schwitters’s “Ursonate” is a collage of speech fragments neatly parceled into the four movements of a traditional sonata.
On the American scene a direct heir to Dada was John Cage. His “4’33” offered its audience only silence. But its compositional vacuum sucks in and magnifies ambient sounds, tying the piece into the tradition of the Italian Futurists and their noise art.
Today, noises are just as likely to come out of traditional instruments. Extended technique has grown into a sophisticated system for producing scratch tones and breathy whispers. Often there’s a strong theatrical element to the resulting music, as in works by the Mexican composer Julio Estrada, in which violinists draw their bows over the backs of their instruments. The Miller Theater at Columbia Universityopened its season last fall with a work by Simon Steen-Andersen that imposed physical restraints — weights, rubber tubes, noise-canceling headphones — on a string quartet trying to play Schumann.
Dada’s penchant for questioning the obvious lives on in instrument-less instrumental works like Vinko Globokar’s “Corporel,” a work using only the performer’s body. Among the works for solo flute commissioned by Claire Chase is one in which she never touches her flute.
Meanwhile Schwitters’s Ur-sounds have inspired vocal writing full of odd gasps, shrieks and consonants that take on a grotesque life of their own. The irony, in a masterpiece like Ligeti’s opera “Le Grand Macabre,” is that these Dadaistic gestures now serve the purpose of highly sophisticated, entertaining and virtuosic art. CORINNA da FONSECA-WOLLHEIM 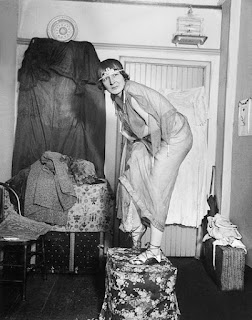 Dada is often viewed as Western culture’s autoimmune response to the cancer of World War I, and that’s so. An aesthetic impulse, it sent antibodies into what was left of a ruined 19th-century moral system, and gave those antibodies names: antiwar, anti-empire, anticapitalism, anti-authority, anti-logic, antinormality. But before Dada there was already a force of healthy resistance in play, and it too had a name: Baroness Elsa von Freytag-Loringhoven.
Born middle-class Else Plotz in Germany in 1874, she had a hard childhood. Her father was abusive; her mother, suicidal. Creative and aggressively resilient, the baroness-to-be fled to Berlin, where she studied art and theater and wrote increasingly fantastical poetry, supporting herself by modeling and shoplifting. She made three bad marriages. The second brought her to the United States; the third gave her a fancy name and title but left her poor and alone in New York.
New York was a good place for her. With the city as her stage, she became one of the 20th century’s first performance artists and a proto-Dada star. She demolished boundaries, between genders, between art and fashion, art and politics, public and private. She preached sensation, surprise. On the street, she wore a birdcage over her head and a tin-can bra. Indoors, she preferred loosefitting wraps that could be whipped off, leaving her nude. Taking lovers of various erotic persuasions, she was a pioneer of queer. She wrote language-crunching, censorship-challenging verse in a steady stream and, well before Marcel Duchamp, invented the readymade as art.
Duchamp, who arrived in New York two years after she did, was a fan, as was Ezra Pound, who praised her “spirit of non-acquiescence.” Jane Heap, co-editor of “The Little Review,” called the Baroness “the first American Dada.” To the young photographer Berenice Abbott she was “Jesus Christ and Shakespeare all rolled into one.”
Her turn in the spotlight was brief. After the war, the focus of Dada moved to Europe. Broke and homeless, the Baroness camped out in Upper Manhattan parks until a few friends rustled up enough cash to send her back to Berlin. There she ended up hawking newspapers. She died — by accident? — in Paris, asphyxiated by a gas leak in a rundown apartment.
The 21st-century art world, with its big rents and prosaic thoughts, has no place for her, though a few people have been paying attention. In 2002, Irene Gammel produced a fabulous critical biography, and the art historian Francis M. Naumann organized a solo show of her assemblages. A volume of her stunning, maddening poetry, way ahead of its time even though marred by the prejudices of its day, has since appeared. But what we could really use, this presidential election year, is her physical presence. She could be our Dada candidate, a one-person campaign: anarchic, border-breaching, outshouting the loudest shouter, putting patriarchy where it belongs, underfoot. HOLLAND COTTER 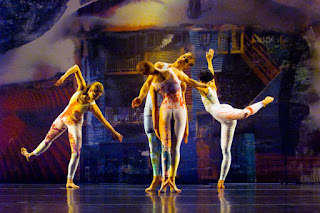 Within a year of Dada’s emergence, the one-act ballet “Parade” (1917) was mightily Dadaist. Serge Diaghilev and the writer Jean Cocteau had brought together two of the great radicals, the painter Pablo Picasso and the composer Erik Satie; they collaborated on it with Diaghilev’s latest choreographer, Léonide Massine.
“Parade” mixed Modernist high art with low art and non-art, Cubism with aspects of street life, the noises of a typewriter, a foghorn, a pistol and more. But it hasn’t endured in this century’s repertory. In Diaghilev’s wake, other companies in the 1920s produced experimentalist ballets along Dadaist lines — Cocteau’s “Les Mariés de la Tour Eiffel” (1921), Francis Picabia’s “Rélâche” (1924). No production of these has endured either.
Surrealism, the offspring of Dadaism, is felt in many dance creations of the 20th century. It’s there in even such central works of the repertory as George Balanchine’s “Serenade” (1934) and Martha Graham’s “Cave of the Heart” (1946). These masterworks, however, lack the anarchic impulse of Dada.
Yet that impulse was lastingly reawakened in the choreography of Merce Cunningham and the music of his longtime colleague John Cage. They started collaborating in 1942 and established a genre of dance theater that has outlived them; artists like Robert Rauschenberg, Jasper Johns, Andy Warhol and Frank Stella helped to make it seem the sequel to Diaghilev’s Ballets Russes. Its central stroke of anarchy was the independence it gave to dance, music and design — which usually came together only at either dress rehearsal or opening night.
Many of Cunningham’s dances are forms of barefoot classicism, rigorous in their devotion to line, rhythm, pattern. This, though, was only part of the mix. He used both dice and computers to help him prepare his dances; awkwardness interested him as much as precision. Some of the scores composed for him by Cage and his fellow composers made the sound effects of “Parade” seem timid. Ten minutes into the first Cage-Cunningham event I attended, in 1979, sustained machine-gun fire sounded from a speaker near me. Later Cage attacked scaffolding beneath the audience with metal bars.
In Cage-Cunningham dance theater, Dadaism met — meets — Zen Buddhism. What happens onstage became a celebration of change as a principle in life. The seemingly bizarre often turns into an expression of the recognizably profound. ALASTAIR MACAULAY 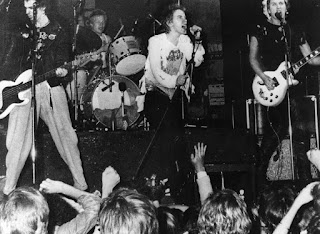 Which Brings Us to Punk

If  you could imagine a musical analogue for texts by Hugo Ball or Kurt Schwitters (it helps that we have recordings of Schwitters reading his own work), it might be structured improvisations in the 1960s and ’70s by, say, Roscoe Mitchell, John Zorn or the ICP Orchestra: noisy, festive, prankish, stubborn, with quick changes of affect. But Dada’s more famous association is with punk, and that association comes less from the artworks than the manifestoes.
The smart, discursive and yappy Zurich-Dada manifestoes were creative expressions of anger in a safe space. They implied that all manifestoes were meaningless. They suggested a mode of criticism with a built-in self-destruct button: “absurd negation that wants no consequences,” as the cultural critic Greil Marcus put it.
They seemed to want to disable the bourgeois practice of business-as-usual in culture; they seemed to carry the implicit knowledge that such business-as-usual leads to war, famine, inequality and corniness. Yet they were above politics. Dada wasn’t claiming a tradition. It wasn’t about study or dancing or spiritualism or aesthetic refinement. It didn’t connect with the past or the future. It was a selfish movement. It didn’t provide for its children.
As Mr. Marcus’s 1989 book, “Lipstick Traces: A Secret History of the Twentieth Century,” makes clear, there was a lot of Dada-grade negation going on in the songs and statements of English punk: Half of the songs on “Never Mind the Bollocks, Here’s the Sex Pistols” use the words “no,” none” or “never” in a clock-stopping way.
But Dada did have influence beyond punk, before and after it. There was the Fugs’ great “Nothing,” from 1966, written by Tuli Kupferberg; his partner in the Fugs, Ed Sanders, reckoned it might have been inspired by a Dada manifesto by the poet Louis Aragon. In the mid-’70s, the English industrial band Cabaret Voltaire named itself after the Zurich club where the Dadaists first gathered and performed. Talking Heads’ “I Zimbra,” from 1979, used a Hugo Ball text for lyrics. Frank Zappa’s work with the Mothers of Invention contained a lot of chaos and withering negativity — but also a lot of virtuosity, which was not a Dada thing.
Captain Beefheart, Devo, Pere Ubu (its name inspired by Alfred Jarry’s proto-Dadaist play “Ubu Roi”), the singer-songwriter Cate LeBon, the experimental hip-hop group Death Grips, the noise band Wolf Eyes: all possibly Dadaist in one way or another. And perhaps even Kanye West’s speech at the 2015 MTV Video Music Awards, loud, passionate, argumentative and self-contradictory: both “I’m not no politician, bro!” and “I have decided in 2020 to run for president.” BEN RATLIFF