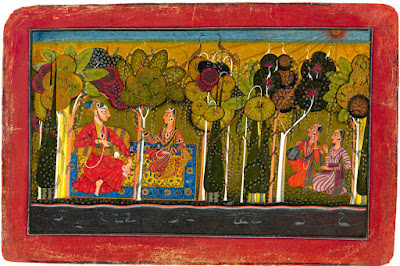 It is the colors that awe most in Hindu painting of the 16th to 19th centuries: the saturated reds, the lambent golds, or the milky blues of Krishna’s skin and the sky at twilight. They are as vivid as ever in“Divine Pleasures,” a handsome and uncommon show at the Metropolitan Museum of Art, which features nearly 100 watercolor and ink paintings from northern India. Illustrations of the Ramayana and other holy texts, portraits of rajahs with horses and elephants, and love scenes both spiritual and erotic plot the development of Indian aristocratic taste over three tumultuous centuries. But the color gleams throughout, alive with otherworldly devotion. 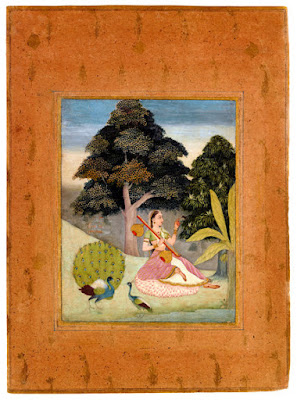 “Gujari Ragini: A Lady With a Vina Seated on a Bed of Lotus Flowers,” by the artist Ruknuddin (active circa 1650-1697).CreditKronos Collections, The Metropolitan Museum of Art.

“Divine Pleasures” celebrates a promised gift to the museum from the scholar and collector (and a former Met curator) Steven M. Kossak, who, together with his family, has assembled a prodigious collection of Asian and other non-Western art. The paintings here, most of which will enter the Met’s collection, come from Hindu, rather than Muslim, principalities and courts that dotted northern India between the arrival of the Mughals, in 1526, and the establishment of the Raj, in 1858. Compared with Mughal miniature painting, known for its refinement and naturalism, the paintings here — from Rajasthan, in the northwest of the subcontinent, and from the independent states of the Punjab hills, south of the Himalayas — are more vibrant and even flamboyant.
Photo

“The Lovers Radha and Krishna in a Palm Grove,” from around 1775-80.CreditKronos Collections, The Metropolitan Museum of Art
You can start to sketch out the shifts in Indian power and prestige from the earliest Rajasthani paintings here: flat compositions from the mid-16th century, making use of bold swaths of red and yellow, and packed with interlocking soldiers and elephants. Mughal influence grew in Rajasthan in the 17th century, however, and the military and courtly alliances spurred Rajput artists to develop new styles that combined Islamic refinement with local pizazz. 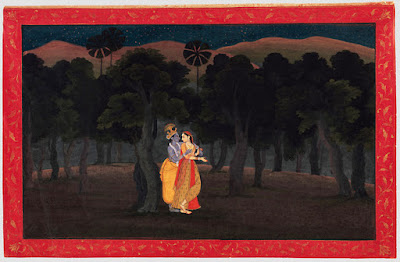 “Krishna Steals the Clothing of the Gopis (Cow Maidens),” around 1640, attributed to an artist known as the Early Master at the Court of Mandi.CreditKronos Collections, The Metropolitan Museum of Art

Some of the most impressive artworks from Rajput artists were assembled into ragamala, or “garlands of ragas”: albums of miniatures that depict passionate lovers, usually alone with musical instruments. Each image is associated with a musical mode, which is, in turn, associated with a poetic source — and, for a courtly audience, the delight of these paintings lay in the complex correspondences that artists imagined across three different media. We see a woman pining in a forest alongside a vina, a plucked string instrument with two hollow spheres for resonance; between her and the sky is a brilliant field of solid red. Another image from a dispersed ragamala, done around 1700, takes the form of a woman flanked by peacocks against a verdant grove, each of whose trees has leaves of different shapes, painstakingly and individually stippled.
Northeast of Rajasthan, the sub-Himalayan courts of the Punjab hills also witnessed shifts in artistic language before and after the arrival of the Mughals. In the 17th century, aristocratic painting from these small kingdoms made use of spare but richly colored backgrounds: a nobleman sits against a field of solid gold, while a ruler believed to be the Maharajah Hamir Chand is fanned by servants before an expanse of vermilion. “Dakshina Gujari Ragini: A Lady With a Vina Reclining in the Forest, Waiting for Her Lover,” circa 1605–6.CreditKronos Collections, The Metropolitan Museum of Art

Northern artists also turned to religious subjects, as in two action-packed paintings here depicting different incarnations of Vishnu. In one, the deity takes the avatar of a giant fish, and surges from the sea with a demon in his jaw. Another sees Vishnu as an ax-wielding avenger taking on a king with a thousand arms. A dozen of the unlucky king’s arms arc through space, as in a stop-motion photograph; six more of his amputated limbs lie on the burgundy ground.

Here, too, Mughal influence eventually pushed artists to greater naturalism, and by the middle of the 18th century, these northern artists had fused Islamic and local painterly traditions into ardent new form. Many of the later works here are deeply erotic, though with a divine tinge. A series from 1775-80 shows Krishna and his companion Lakshmi making love in a dense copse of flowering trees, her bare breasts pressed against his blue torso. Another shows Krishna with four milkmaids, three of whom engage with him: One resists his seduction, another flirts back, and one is happy to go at it by the riverside. 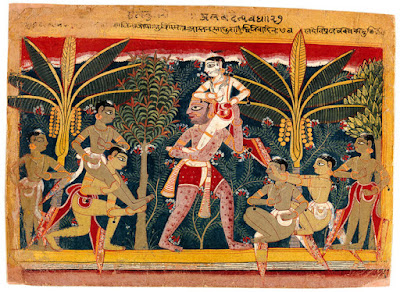 “Blindman’s Buff: The Demon Pralamba Carries Balarama on His Shoulder,” circa 1560-65.CreditKronos Collections, The Metropolitan Museum of Art..

Mr. Kossak knows better than anyone how his gift will transform the Met’s Mughal-heavy holdings in Indian painting: He was, until 2006, a curator in the museum’s department of Asian art. We should therefore get a thorny matter out of the way. Though he acquired a majority of his collection before joining the Met, Mr. Kossak bought some of these paintings while he was also fleshing out the Met’s own holdings. In the catalog for this exhibition, Mr. Kossak explains that he acquired only works that the Met had passed on, though, on some occasions, “dealers offered me works personally … and I acquired them with the idea of eventually donating them to the Met.”
Philippe de Montebello, the Met’s former director, told The Wall Street Journal recently that no conflict arose during Mr. Kossak’s tenure. When Mr. Kossak had the chance to acquire an artwork, Mr. de Montebello said, “he would have brought it to the attention of the museum, and said, ‘If you’re not going to go after it, then I will.’”

Mr. Kossak is a throwback to an earlier generation of independently wealthy curators who also assembled collections, and there is a touch of the old-timey, connoisseurship-driven art history in “Divine Pleasures.” The Met will need time to look beyond the gorgeous surfaces of these paintings, and to integrate them into a larger and more critical narrative of Indian and pan-Asian history and society. For now, best to be grateful. These exquisite paintings are in the public trust, and an artistic tradition once reserved for the aristocracy belongs to all of us.