‘A CUT ABOVE ANYTHING I HAVE EVER DONE’ . WINSTON CHURCHILL GAVE HIS ONLY WARTIME LANDSCAPE TO FRANKLIN D. ROOSEVELT

January 1943 and the Second World War is at a turning point. In Casablanca, two political giants, the British Prime Minister Winston Churchill (1874-1965) and the US President Franklin D. Roosevelt (1882-1945), meet to discuss the Allies’ future strategy. After 10 days of hard negotiations, it is decided that Germany, Italy and Japan should surrender unconditionally.

In its struggle against Nazi Germany, Britain depends on the strength of the American alliance. FDR is keen to return to the United States, but Churchill persuades him to stay an extra day in Morocco and take the 150-mile drive to Marrakech. ‘You cannot come all this way to North Africa without seeing Marrakech,’ he says. ‘I must be with you when you see the sun set on the Atlas Mountains.’

The two statesmen stay at the Villa Taylor on the outskirts of the city, and from its five-storey tower watch the sun go down over the snow-capped mountains. As Churchill’s doctor, Lord Moran, later recalled: ‘We stood gazing at the purple hills, where the light was changing every minute.’ 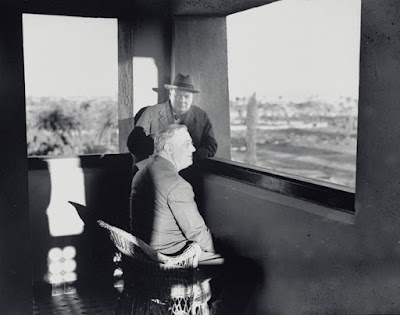 According to Nick Orchard, Christie’s head of Modern British & Irish Art, Roosevelt was mesmerised by the scene. ‘It is an incredibly poignant moment,’ he says. ‘Here are two great leaders sharing the briefest respite from the traumas of war.’ Days later, the Americans mounted their first air strike inside Germany.

After the American delegation had departed, Churchill remained at the villa an extra day, taking the opportunity to paint the view of the Koutoubia Mosque framed by the Atlas Mountains. He then sent the artwork to Roosevelt, as a present for his birthday on 30 January.

‘This is Churchill’s diplomacy at its most personal and intense,’ says Orchard. ‘It is not an ordinary gift between leaders. This is soft power, and it is what the special relationship is all about.’

Offered for sale on 1 March, Tower of the Koutoubia Mosque, 1943, is Churchill’s most important work. Aside from its distinguished provenance, it is the only landscape he made during the Second World War.

Unsurprisingly, the conflict afforded Churchill little time for art. For a politician who had taken up painting in his forties to escape the ‘black dog’ of depression, this must have been particularly hard.

‘It was an absolute passion for him, and he did it for himself. He never sold a work of art, but sometimes gave them to friends and family,’ says Orchard. ‘When he died in 1965, many of his 500 or so paintings were still in his estate.’ It might have surprised the British PM that his paintings are so highly sought-after today, fetching up to £1.8 million at auction.

‘It wasn’t just a case of political manoeuvring. They had a great deal of empathy for one another’s position. There was a real friendship there’ — specialist Nick Orchard

Churchill considered the landscape he executed that day ‘a cut above anything I have ever done so far’.

Orchard agrees: ‘He’s handled the light brilliantly. You can see the strong shadows of the late afternoon and the real sense of movement in the figures as they walk back to the gates at the end of a long day.’

The Prime Minister had no illusions about Britain’s chances of winning the war without America, but Roosevelt’s re-election in 1940 had been on a pledge to keep the country out of the European conflict. For 18 months the wily British statesman had done everything he could to draw the United States in.