NOW REVEALED: QUEEN LOBBIED FOR CHANGE IN LAW TO HIDE HER PRIVATE WEALTH 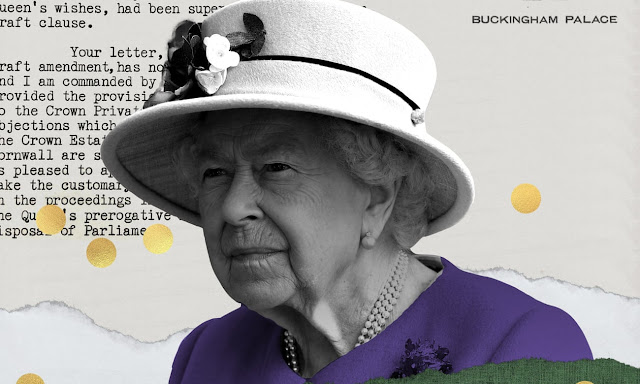 by David Pegg and Rob Evans

The Queen successfully lobbied the government to change a draft law in order to conceal her “embarrassing” private wealth from the public, according to documents discovered by the Guardian.

A series of government memos unearthed in the National Archives reveal that Elizabeth Windsor’s private lawyer put pressure on ministers to alter proposed legislation to prevent her shareholdings from being disclosed to the public.

Following the Queen’s intervention, the government inserted a clause into the law granting itself the power to exempt companies used by “heads of state” from new transparency measures.

The arrangement, which was concocted in the 1970s, was used in effect to create a state-backed shell corporation which is understood to have placed a veil of secrecy over the Queen’s private shareholdings and investments until at least 2011.

The true scale of her wealth has never been disclosed, though it has been estimated to run into the hundreds of millions of pounds.

Evidence of the monarch’s lobbying of ministers was uncovered by a Guardian investigation into the royal family’s use of an arcane parliamentary procedure, known as Queen’s consent, to secretly influence the formation of British laws.

Unlike the better-known procedure of royal assent, a formality that marks the moment when a bill becomes law, Queen’s consent must be sought before legislation can be approved by parliament.

It requires ministers to alert the Queen when legislation might affect either the royal prerogative or the private interests of the crown.

The website of the royal family describes it as “a long established convention” and constitutional scholars have tended to regard consent as an opaque but harmless example of the pageantry that surrounds the monarchy.

But documents unearthed in the National Archives, which the Guardian is publishing this week, suggest that the consent process, which gives the Queen and her lawyers advance sight of bills coming into parliament, has enabled her to secretly lobby for legislative changes.

Thomas Adams, a specialist in constitutional law at Oxford University who reviewed the new documents, said they revealed “the kind of influence over legislation that lobbyists would only dream of”. The mere existence of the consent procedure, he said, appeared to have given the monarch “substantial influence” over draft laws that could affect her.

‘Disclosure would be embarrassing’

The papers reveal that in November 1973 the Queen feared that a proposed bill to bring transparency to company shareholdings could enable the public to scrutinise her finances. As a result she dispatched her private lawyer to press the government to make changes.

Matthew Farrer, then a partner at the prestigious law firm Farrer & Co, visited civil servants at the then Department of Trade and Industry to discuss the proposed transparency measures in the companies bill, which had been drafted by Edward Heath’s government.

The bill sought to prevent investors from secretly building up significant stakes in listed companies by acquiring their shares through front companies or nominees. It would therefore include a clause granting directors the right to demand that any nominees owning their company’s shares reveal, when asked, the identities of their clients.

Three crucial pages of correspondence between civil servants at the trade department reveal how, at that meeting, Farrer relayed the Queen’s objection that the law would reveal her private investments in listed companies, as well as their value. He proposed that the monarch be exempted.

“I have spoken to Mr Farrer,” a civil servant called CM Drukker wrote on 9 November. “As I had recalled he – or rather, I think, his clients – are quite as concerned over the risk of disclosure to directors of a company as to shareholders and the general public.

FacebookTwitterPinterest The Queen with the then prime minister, Edward Heath, in 1973, the year Heath’s government put forward the transparency proposals. Photograph: Mirrorpix/Getty Images

“He justifies this not only because of the risk of inadvertent or indiscreet leaking to other people,” Drukker continued, “but more basically because disclosure to any person would be embarrassing.”

After being informed that exempting only the crown from the legislation would mean it was obvious any shareholdings so anonymised were the Queen’s property, Farrer, the correspondence states, “took fright somewhat, emphasised that the problem was taken very seriously and suggested – somewhat tentatively – that we had put them into this quandary and must therefore find a way out.”

Drukker continued: “He did not like any suggestions that holdings were not these days so embarrassing, given the wide knowledge of, for example, landed property held. Nor did he see that the problem might be resolved by any avoidance of holdings in particular companies. It was the knowledge per se that was objectionable.”

After being informed by Farrer “that he must now seek instruction” from his client, Drukker advised a colleague: “I think we must now do what you suggested we should eventually do – warn ministers.”……………