OF COURSE, ‘THEY COST THEIR WEIGHT IN GOLD, AND THEY ARE WORTH IT’ — THE DRAWINGS OF JEAN-HONORÉ FRAGONARD 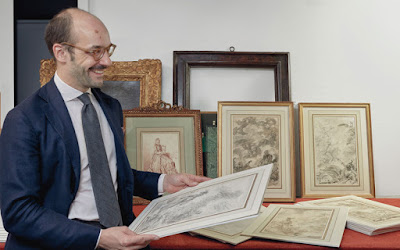 In the catalogue for the Metropolitan Museum of Art’s 2016 exhibition Fragonard: Drawing Triumphant, the art historian Marie-Anne Dupuy-Vachey claims that recent history has focused on Fragonard’s painted oeuvre, while his drawings have received only secondary attention. This was not the case in his lifetime, she says.

‘During the 1770s and 1780s,’ she writes, ‘the prices at auction of certain sheets were comparable to those of paintings.’ One contemporary connoisseur, she adds, remarked that the artist’s works on paper ‘cost their weight in gold, and they are worth it’.

‘Each sheet is a masterpiece of grace, poetry, and humour’ — art historian Marie-Anne Dupuy-Vachey

Whether working in chalk, ink or wash, Fragonard was addicted to drawing, says Christie’s Old Master Drawings specialist Stijn Alsteens. ‘He did it constantly, on whatever subject he could think of, and in whatever medium he had at his disposal.’

As a result, he became one of the greatest draughtsmen of his era. And unlike many other Old Master artists, who used drawings simply as a preparatory tool for their paintings, Fragonard viewed them as works of art in their own right.

From January 14-26, in Old Master and British Drawings, Christie’s is offering 14 drawings that illustrate the breadth of Fragonard’s skills.

A Young Woman Dozing (above) highlights the variety of marks the virtuoso could draw on from his repertoire. ‘There is so much happening in the exquisite folds and ruffles of the silk dress worn by the sitter — thought by some to be Fragonard’s daughter — that it becomes the subject of the picture,’ says Alsteens. ‘It’s less a portrait of her and more a portrait of her dress.’

The study was most likely executed between 1775 and 1785, at the height of Fragonard’s fame, and belongs to a series of drawings praised in the late 19th century by the French writers Edmond and Jules de Goncourt

Using the same gilded vocabulary as Fragonard’s pictures, they wrote how ‘the red chalk, almost crushed under the artist’s pressure, seeming to flog the backgrounds with its corkscrew markings, brutalises the stuffs, the trimming of a dress, rumples triumphantly the fanciful fripperies and adornments of costume, attacks with the same force the features, hacking them with shadow, and performs the miracle of revealing, beneath such violent handling, the smile of a pretty woman’.

The drawing, explains Alsteens, comes from the estate of the editor Cornelia Bessie (1929-2020), wife of the American publishing tycoon Simon Michael Bessie, and was given to her on Christmas Day in 1982 by her mother, the art dealer Kate Schaeffer.

The other 13 drawings coming to auction are from a group of at least 179 that Fragonard produced circa 1780 to illustrate part of Ariosto’s 16th-century epic poem, Orlando Furioso. With its tales of knights and maidens, magic and mysterious beasts, the work was particularly popular in hedonistic 18th-century France.

These sheets reveal Fragonard’s ability to adapt his manner of drawing. Completed over the course of more than year, they are loosely executed in black chalk applied in a whirlwind of intricate and twisted lines from which the figures powerfully emerge. Layers of blue and grey wash applied over the chalk add a theatrical sense of depth.

‘It’s unlikely this series was ever intended to be published,’ says Alsteens. ‘The sheer quantity — and they don’t even cover half the poem — would have made it an unwieldy, laborious process. Instead, they’re more likely a personal passion project.’ 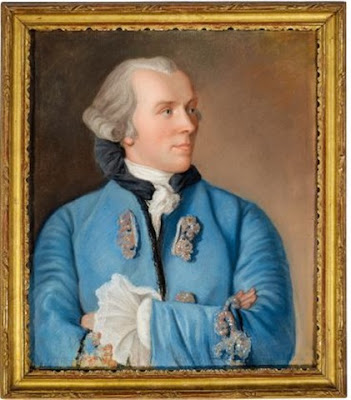 Ariosto spent his entire career in the service of the Este court in Ferrara, Italy, and dedicated Orlando Furioso  to Cardinal Ippolito d’Este. Nearly 250 years later, in 1760, Fragonard spent a summer there as a guest of the Este family, where it has been suggested he became familiar with the original Italian text.

‘There are details in the drawings that he could only have captured from the Italian version,’ says the specialist. ‘He had a deep understanding of the chivalric spirit of the poem.’

In 2003, Marie-Anne Dupuy-Vachey painstakingly identified the subjects of all 179 sheets, each of which, she says, is ‘a masterpiece of grace, poetry, and humour’.

After Fragonard’s death in 1806, the drawings remained with his family in Grasse. They eventually passed to the great French collector Hippolyte Walferdin, who in turn sold them in 1880 to Louis Roederer, owner of the renowned champagne house. In 1922 they were bought by a book dealer in Philadelphia, who gradually began to disperse them.

Today, sheets from the series can be found in the Morgan Library and Museum and the Metropolitan Museum of Art, both in New York, the National Gallery of Art in Washington, D.C., Harvard Art Museums in Massachusetts, the Louvre in Paris and the Victoria and Albert Museum in London.

The 13 examples offered in the sale, kept together since Fragonard’s death, are thought the be the largest group in private hands. They come from the collection of the New York patrons and collectors Nina R. and Arthur A. Houghton, Jr. Arthur Houghton served as president and later chairman of the Metropolitan Museum, and endowed Harvard with the Houghton Library of rare books and manuscripts.