THESE DAYS, A NEWLY UNCOVERED AZTEC SCULPTURE, HI-RES IMAGES OF THE RAPHAEL CARTOONS AND THE BAYEUX TAPESTRY, COVID IN YEMEN, COMEDY'S ALT-RIGHT PROBLEM, AND MORE. 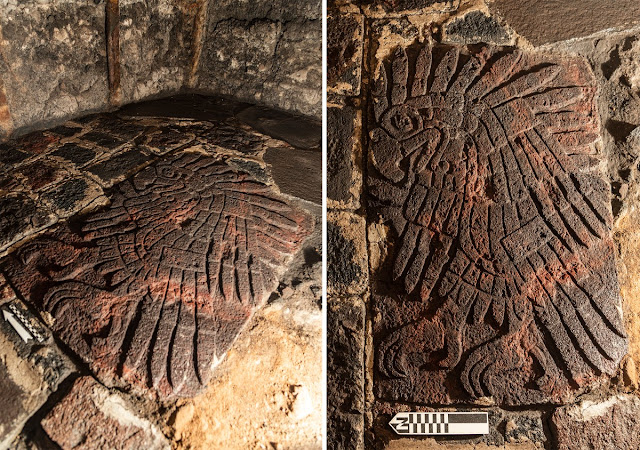 A 600-year-old obsidian stone eagle has been unearthed in Mexico City. Carved into the floor of Templo Mayor in the Aztec capital of Tenochtitlan, it is the largest bas-relief sculpture found at the important temple site. The sculpture was carved into the floor of a chapel devoted to sun and war god Huitzilopochtli and a monument honoring moon goddess Coyolxauhqui. Researchers believe the work was created some time in the mid-15th century, during the reign of the legendary ruler Moctezuma I (1440–1469 CE). Credit: Mirsa Islas / Templo Mayor Project

I like that the Getty is rethinking its terminology for Ancient art. Paula Gaither, Elisa McAtee, Kenneth Lapatin, and David Saunders write:

Modern conceptions of race are unhelpful when discussing the ancient world. These are based largely on the transatlantic slave trade, colonialism, and European imperialism—all of which took place centuries after the period that we are studying. We decided to use the term “Black African” as we believe this best acknowledges the fact that not all Africans are Black and not all Black people are African. To use one without the other risks conflating an entire continent with a construct of race and imposing modern notions onto the past.

The inadequacy of our old online descriptions took many forms. Some were simply lacking altogether. Others were brief, providing a short account, but hardly helpful without broader context. Another group had lengthy texts, but these were written over a decade ago and many called out for revision. A number, for example, overlooked issues of race, gender, violence, and enslavement. This silence is dangerous, as it leaves space for anachronistic assumptions and stereotypes to flourish.

The Victoria & Albert Museum has uploaded high-resolution scans of The Raphael Cartoons. They were commissioned in 1515 by Pope Leo X for the Vatican’s Sistine Chapel and depict the lives of the apostles Saint Peter and Saint Paul. The cartoons have been on loan to the V&A from Her Majesty the Queen since 1865. You can see them in great detail.

Adding to the joy of hi-res historical art, the Bayeux Tapestry is also available to view in wonderful detail.

A growing number of today’s cognitive scientists, neuroscientists and philosophers are aggressively pursuing well-funded research projects devoted to revealing the underlying causal mechanisms of thought, and how they might be detected, simulated or even replicated by machines. But the purpose of thought — what thought is good for — is a question widely neglected today, or else taken to have trivial, self-evident answers. Yet the answers are neither unimportant, nor obvious.

The neglect of this question leaves uncertain the place for thought in a future where unthinking intelligence is no longer an oxymoron, but soon to be a ubiquitous mode of machine presence, one that will be embodied in the descendants and cousins of GPT-3. There is an urgent question haunting us, an echo from Alfred North Whitehead’s conclusion in 1911 that civilizations advance by expanding our capacity for not thinking: What thoughts do the civilized keep?

Furtherfield has been publishing some solid stuff. A veteran of net and digital art, the site continues to engage in important discourse around art. Marc Garret (the man behind the site) writes about Contemporary Art culture now:

Furtherfield comes from a cultural hacking background and has incorporated into its practice ideas of hacking not only with technology but also in everyday life. In fact, Furtherfield is one big social hack. Hack Value advocates an art practice and cultural agency where the art includes the mechanics of society as part of its medium as well as social contexts with deeper resonances, and a critical look at the (art) systems in place. It disrupts and discovers fresh ways of looking and thinking about art, life and being. Reclaiming artistic and human contexts beyond the conditions controlled by elites.

Hack Value can be a playful disruption. It is also maintenance for the imagination, a call for a sense of wonder beyond the tedium of living in a consumer, dominated culture. It examines crossovers between different fields and practices, in relation to their achievements and approaches in hacking rather than as specific genres. Some are political and some are participatory. This includes works that use digital networks and physical environments as well as printed matter. What binds these examples together is not only the adventures they initiate when experimenting with other ways of seeing, being and thinking. They also share common intentions to loosen the restrictions, distractions and interactions dominating the cultural interfaces, facades and structures in our everyday surroundings. This relates to our relationship with food, tourism, museums, galleries, our dealings with technology, belief systems and community ethics.

I highly recommend this week’s Frontline and their report on COVID in Yemen. It’s a fantastic look at an underreported war by Yemen-born journalist Nawal al-Maghafi as she uncovers what people are forced to cope with during the Saudi-led war. More of this please.

The Taiwan English News reports that a Chinese professor, Huang Heqing, has some very racist and bizarre theories about Classical Mediterranean civilizations:

Huang Heqing stated in his lecture that from the 19th to 20th centuries, the West was rampantly forging historical and cultural relics, and spending huge sums of money everywhere from the Mediterranean to India, fabricating fake ancient relics.

The Pyramids of Khufu, and the Great Sphinx of Giza, were made of concrete, and constructed in the 19th century, Huang claims.

“A well-known French chemist and material scientist conducted physical and chemical analysis on the Khufu pyramid in the 1980s, and confirmed that other than a small amount of natural stone, it mostly consisted of concrete.”

“Another materials scientist from the United States came to a similar conclusion,” Huang says, without naming the French and American scientists.

Alana Lentin writes about why some anti-colonial scholars are being accused of anti-semitism. It’s troubling:

I had this feeling recently when I received an email from a team of editors in Germany — postcolonial and decolonial scholars — for whom I had agreed to adapt my talk ‘White supremacy, white innocence and inequality in Australia’. The email requested that I remove two lines from my text: one which referred to Israel “running the longest occupation of any people by another in the world”; the other that cited the state’s “regime of racial supremacy over Black and Brown Jews”. In the context of deepening attacks on critics of Israel, including Jews and Israelis, from German cultural, academic and municipal institutions, I categorically refused.

Read the Thom Hartmann column until the very end. So good. It begins:

He lied to his followers for years.

He told them he was chosen by God to lead them, and that they were the only “true” believers; everybody else was okay with abortion, homosexuality, and was weak-kneed about the Bible’s call for a vengeance that mandates the death penalty. He reveled, in fact, in his ability to use the death penalty.

The rightwing preachers loved him, and he showered them with attention, bending government to shower them with wealth and power. They, in turn, told their congregants that, despite his personal failings, he was The One, the reincarnation or at least the modern version of an ancient king who scripture said would come to lead their people into the Last Days when the Messiah would return. …

The smugness and self-importance of this is off the charts. Alexander Nazaryan should know better as he has done some wonderful reporting before, yet:

Covering the administration was thrilling for many journalists, in the way that I imagine storming Omaha Beach must have been for a 20-year-old fresh from the plains of Kansas. He hadn’t signed up for battle, but there he was, liberating France. France, by the way, is where Trump called American soldiers who’d fallen in combat “suckers” and “losers.” When this magazine first reported those comments, Trump’s supporters denounced the Atlantic story as preposterous and offensive, even as outlet after outlet confirmed the reporting. They failed to realize that the preposterous and the offensive were the twin beacons of the Trump presidency. Journalists were merely going where he led. This was our Omaha Beach. I, for one, would have rather been in Hawaii.

The comedy industry appears to have an alt-right problem. In the New Republic, Seth Simons writes:

If the far right’s origins in comedy are ill-appreciated, they were never particularly secret. By his own account, Gavin McInnes created the Proud Boys on Compound Media, a subscriber-based digital network where he hosted a talk show from 2015 to 2017. Originally called the Anthony Cumia Network, Compound Media was created in 2014 by Cumia — the “Anthony” half of Opie & Anthony — after his firing from SiriusXM over a series of racist tweets.

The Gavin McInnes Show, like many other programs on the self-styled “free speech network,” was not shy about its politics. Over the show’s 407 episodes, McInnes spoke glowingly of right-wing violence, proudly declared himself a racist, and regularly used the n-word, among other slurs. When a caller questioned his interracial marriage in 2016, McInnes responded that he had children with a woman of color because he’s “cleaning up the races.” The pretense of irony hung over everything he said, but pretense is all it ever was. Compound Media was where telling jokes gave way to saying what you meant, jokingly.