REMAINS OF COURAGEOUS ARCHAEOLOGIST BEHEADED BY ISIS FOUND IN SYRIA

Khaled Al-Asaad was beheaded in 2015 after refusing to lead ISIS to ancient artifacts from Palmyra that he had hidden in a secure location. 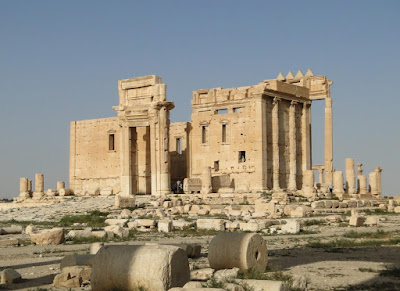 The Temple of Bel (also referred to as Temple of Baal) in Palmyra, Syria before it was destroyed by Islamic State militants in 2015 (Wikimedia Commons)

Syrian authorities say they have located the body of Khaled al-Asaad, an archaeologist who was brutally murdered by Islamic State (commonly known as IS or ISIS) militants in the ancient city of Palmyra in 2015.

Al-Asaad, who served as the director-general of the Palmyra Directorate of Antiquities and Museums from 1963 to 2003, was captured by ISIS fighters in August of 2015. He was beheaded after refusing to lead his captors to artifacts that he had hidden in a secure location as ISIS approached Palmyra. He was 82 at his death.

Syria’s state media reported yesterday, February 7, that Al-Asaad’s remains were among three bodies of ISIS captives found around Palmyra. DNA examinations will be conducted to confirm their identities.

In the months following Al-Asaad’s murder, ISIS destroyed Palmyra’s Arch of Triumph, the temples of Bel and Baalshamin, and the Lion of Al-lāt. Palmyra’s museum was looted, and carvings bearing human figures were torn off. The amphitheater was used as a backdrop for public beheadings.

In late 2016, ISIS recaptured the city after it was briefly reclaimed by the Syrian army forces. Shortly after that, in January of 2017, the militants decimated more ancient sites at Palmyra, including a Tetrapylon and part of a Roman Theatre.

Syrian government forces have controlled the site since March of 2017. While some of the damaged artifacts have been restored, a major reconstruction of the site remains delayed due to the ongoing civil war. In 2019, ISIS was driven out from most of the vast territory it had seized between Iraq to Syria. However, the United Nations estimates that more than 10,000 militants remain active in both countries.

An acclaimed archaeologist, Al-Asaad was widely mourned by the international community.

“They killed him because he would not betray his deep commitment to Palmyra,” said Irina Bokova, who was Unesco’s director-general at the time of his death. “Here is where he dedicated his life, revealing Palmyra’s precious history and interpreting it so that we could learn from this great city that was a crossroads of the ancient world. His work will live on far beyond the reach of these extremists. They murdered a great man, but they will never silence history.”

Three of Al-Asaad’s sons and his son-in-law, who are also archaeologists, escaped to Damascus with hundreds of valued antiquities from the museum in Tadmor (the modern city of Palmyra) as the ISIS militants approached. But Al-Asaad refused to flee the city.

“I am from Palmyra,” Al-Asaad said, “and I will stay here even if they kill me.”