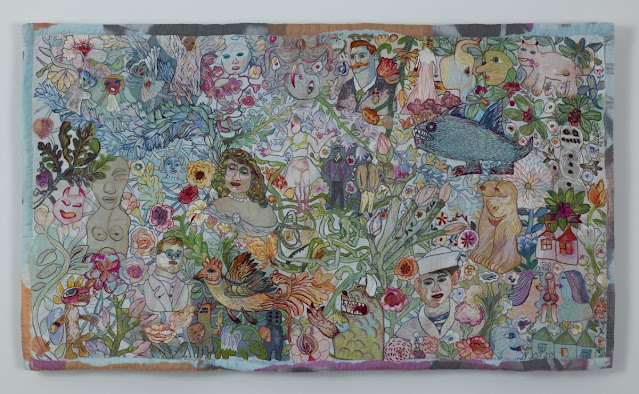 Permanent Danger, the artist’s major solo show at the Textile Museum of Canada, showcases works from the last two decades of Torma’s 40-year career. The exhibition takes its title from a wall-sized 2017 tapestry covered with meticulously stitched, fire-breathing beasts. “You can feel the energy that’s bound up in these things,” exhibition curator and museum Curatorial Director Sarah Quinton said in a recent video call. For her, Torma’s fantastical works are actually “an antenna out into the world that deal with concerns around the environment, global warming, and unknown threats that do exist.”

Torma was born in 1952 in Tarnaörs, a village in northern Hungary. Her first contact with art came from her parents: her father painted landscapes and still lifes when he wasn’t farming, and her mother and grandmothers taught the young artist regional needleworking techniques used to prepare a young woman’s bridal trousseau. Torma’s facility with class drawing assignments and skill with sewing doll clothes were early signs of her artistic path. “I have always been smart with my hands,” Torma told Hyperallergic in a video call from her New Brunswick studio. Torma, whose sunny studio is filled with potted plants and piles of new works, is shy but quick to smile, and speaks in a soft, melodic voice.

In the 1970s, Torma studied Textile Art and Design at the Hungarian University of Applied Arts in Budapest. She chose to focus on textile — a medium with domestic associations often considered to be women’s work — while feminist art practices gained traction around the world. But Hungary’s insular, anti-capitalist political climate made it nearly impossible to travel or have access to information about international art currents at the time. “The outside came to us in books and translations,” Torma explained. “To grow in this little Hungarian Socialist bubble was very pleasant until we saw the edges of that bubble and said, it must be bigger.”

In 1988, Torma and her husband, the sculptor István Zsakó, immigrated to Canada with their two young children, who are also now working artists. In Canada, Torma “seamlessly integrated the traditional needle work of her Hungarian formal training and that of earlier generations of stitchers, but upended it and implicated these traditions in a much more contemporary, expressive, individualistic form,” Quinton said................