SOME MICHAEL RAKOWITZ’S RECREATIONS OF ART TAKEN FROM IRAQ

Hyperallergic has the exclusive premiere of Art21's "Haunting the West", a short film about Rakowitz’s artistic efforts to end the marginalization of West Asian art and history. 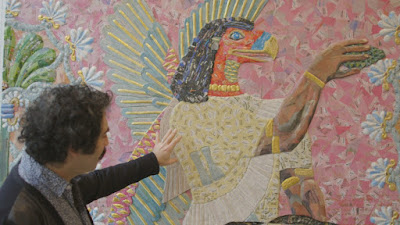 A still from Haunting the West (courtesy Art21)

I remember my mother bringing us to the British Museum in London. My mother’s family was from Iraq. She brought us immediately to the Assyrian galleries and into the room that had the Lion Hunt of Ashurbanipal. There’s nothing cooler than being ten years old and learning that this is the first comic book and your people are responsible for it. She turned to us and she said, ‘What is it doing here?’ Which made us keenly aware that these museums were not just these polite reliquaries for things that have been exchanged amongst cultures — that these were violently extracted. It was a museum, but it was also a crime palace.

That is how Michael Rakowitz introduces Haunting the West, the latest short film from Art21. This documentary profile of Rakowitz delves into how he uses his various works to conjure the ghosts of tragedies across West Asia, both recently and historically. The film goes behind the scenes of projects like Nimrud, in which he used the packaging for food products from Iraq to recreate “Room H” from the ancient Northwest Palace of Nimrud, and “The Invisible Enemy Should Not Exist,” his installation in Trafalgar Square featuring a similar recreation of a lamassu statue that had been vandalized by ISIS.

Ahead of its official release on Art21, Hyperallergic is proud to present the premiere of the film. You can stream it exclusively on this page for the next five days.

Produced by interviewer Ian Forster, the film uses the issues Rakowitz explores to ask harder questions about the value that the rest of the world places on West Asian art, and how to properly redress the many injustices the West has wrought on the region. As Rakowitz says at the end of the film, “If we’re to have conversations about what decolonization truly looks like, it’s accompanied by repair and it’s accompanied by accountability. That work is actually something that’s never done.”

Haunting the West will be available to stream via Art21 on 2/17.